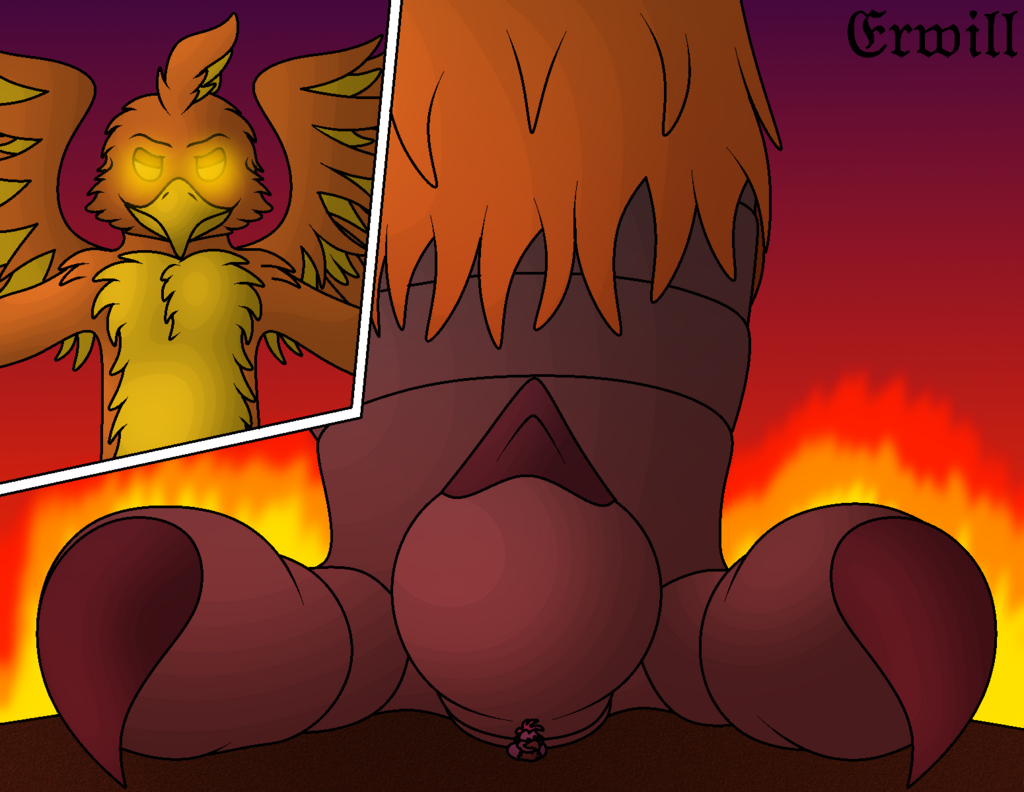 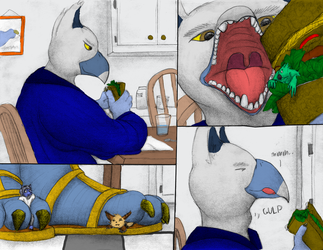 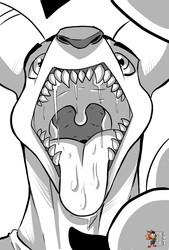 Hmm, you know, I imagined myself as a phoenix. So I let erwill be under my big foot. :)
As for info, I got some in mind...

The phoenix is anthropomorphic.
He has a height of 300 meters
It is thin but strong.
Its legs are black and are like those of any self-respecting eagle or crow.
It has a yellow beak,
His eyes are brown.
And it has beautiful orange feathers all over its body, except on its belly where it is yellow.

His teeth inside his beak are similar to a human's, although hardly noticeable. (And probably has meat scraps stuck to his teeth.)

For his normal attire, he wears Green sandals, with a short-sleeved black beach shirt with red flowers, and green shorts with white briefs underneath the briefs. He also uses those briefs to keep some micros he thinks he wants to keep safe from his fire.

Speaking of which, he has different abilities, including his fire powers. He has the standard phoenix abilities (like reincarnation from his ashes), but also can light his body up like the Human Torch from the Fantastic 4.
He can perfectly see humans under his feet.
He can activate his fire anytime, and can also use said heat at his feet to burn away any unlucky being underneath his feet. It gets pretty hot when being burned alive underfoot...
Speaking of which, he can also activate his heat (without the fire), which to micros, would be really hot. If there were micros walking among his feathers, they would feel like they were walking in a desert. Their meat would also cook, and the phoenix would want to eat them up. (yummy~)
He could only really be close to a normal person without them being burned just by touching his heat, with an intensity said to be that of a thousand suns.
When he has his heat on, only those he trusts can even be next to him without feeling the effects of his heat.
If the heat does not kill them, he simply takes them to his mouth and swallows them whole. There, the gastronomic juices would be responsible for killing them, unless he decides to catch fire and turn his stomach into a sauna.

His main food is primarily humans.

Art and micro by erwill
Phoenix is of me~
Original: https://www.furaffinity.net/view/38159711/