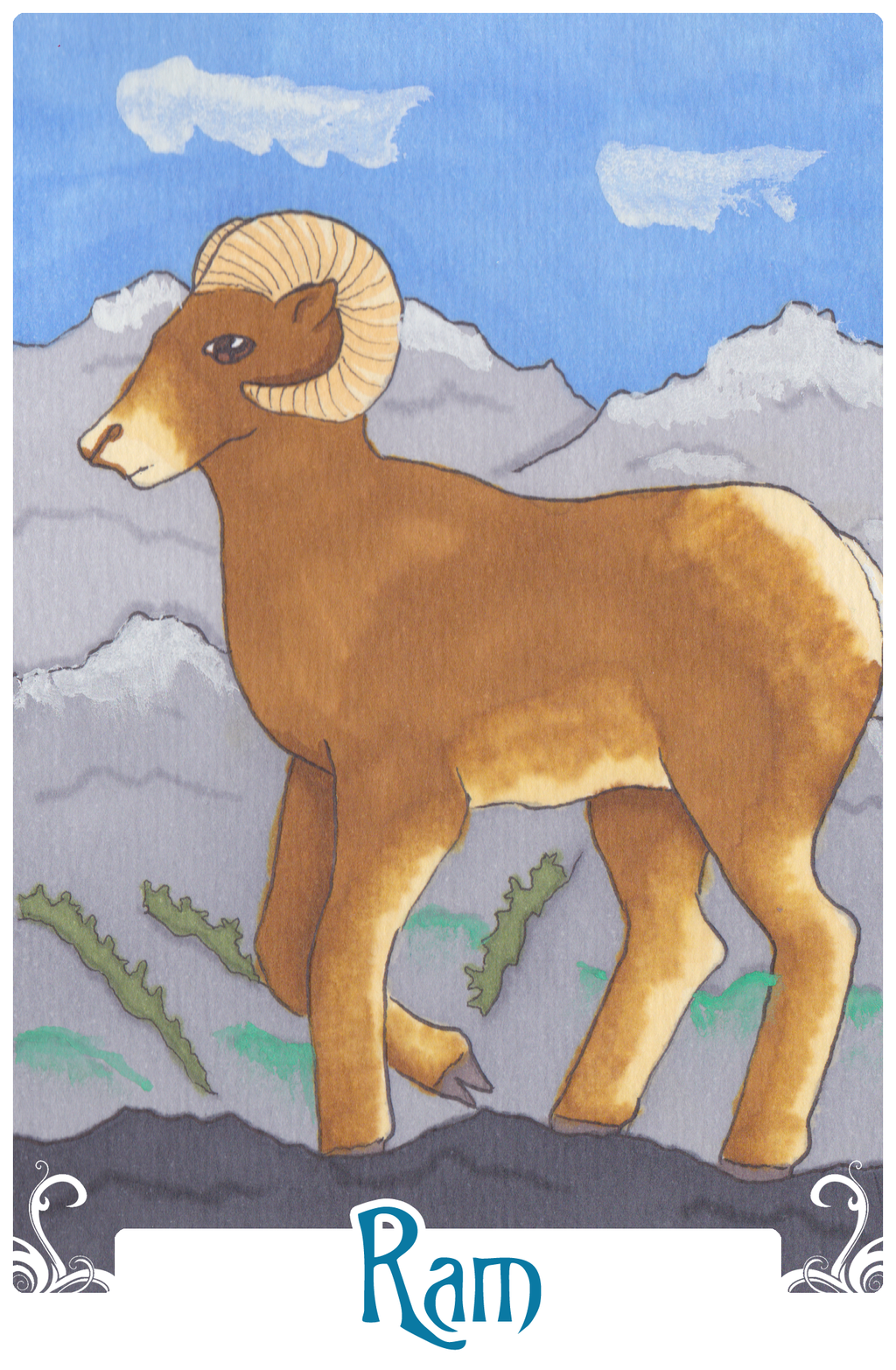 Folder:
Sky Above Earth Below « Older 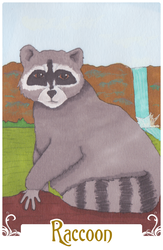 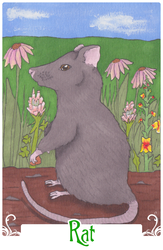 Part of the Sky Above Earth Below Oracle Deck I created in 2014. Mixed Media

Ram (Achievement, Sacrifice)
Ram crashes its horns against its foe. These large mammals are sometimes called bighorn sheep. The spiral horns of a ram can weigh up to 30lbs (14kg). Ram is the name generally given to males of the species. Females, called ewes, also have horns; though smaller and less curved. The characteristic horn smashing displayed by rams takes place most often before and during mating season. This is to show genetic dominance but can happen year round with less frequency. Rams may also use their horns as a sort of weapon, head butting predators as a defense mechanism. Bighorn sheep live in mountainous regions, in alpine meadows and rugged foothills; venturing up into mountains when needed. Because of their herbivorous diet they will remain near the treeline and will travel into more mountainous regions when giving birth to escape predation. Like goats, bighorn sheep have ‘toes’ that pinch, allowing them excellent mobility even in steep and uneven terrain. Most species prefer cooler zones, though desert species do exist. Bighorn sheep live in large flocks. While there may be some hierarchy it is not as clearly defined as other social animals.

Bighorn sheep, rams in particular, are hunted for meat. Because of their horns they are also hunted as trophy animals. For many cultures ram is a symbol of sacrifice. The ritual killing of a lamb, or ram was practiced regularly. The most well known case of ram sacrifice may well be the story of Abraham. Abraham was asked by god to kill his son as a test of faith. An angel intervenes to save the boy and a nearby ram is killed instead. Because ram is linked to the zodiac sign Aries, near the spring equinox, it is associated with the renewal and rebirth of spring. Ram is featured in the story of the golden fleece from Greek mythology. This may serve as an allegory for great quests providing great rewards. Ram was revered in ancient Egypt; often linked to fertility, war, and often to the sun as well. Statues of rams line the entrance to the temple of Amun, an Egyptian god who was considered the King of the gods and later became linked with the sun god Ra. Zeus was the Greek equivalent to Ra and is also associated with ram symbolism. The Norse god Thor was said to have a chariot pulled by rams (or sometimes goats).

When ram crashes into your cards it can mean a time for new achievements. What are you crashing headlong into? Are you maintaining balance on your climb to new things? What are you willing, or unwilling to sacrifice? Ram is most linked to the sun card. A study of the mountain biome may provide additional information.

Astrology- (Western Aries Mar 21- Apr 19) This western sign is creative and spontaneous. Aries is adaptive and insightful; and can get along with all kinds of people. This fire sign has a passionate personality and can be incredibly driven. Their fiery side can make Aries quick to anger and they have a tendency towards impatience. Strong-willed Aries is a loyal friend, fighting their cause, and the causes of the ones they hold close. With an excellent sense of humour, Aries can tackle almost anything so long as they set their mind to it.