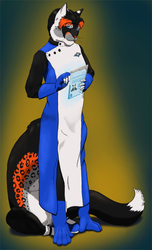 At first glance It would seem my fursona has not changed but the black from my back is slowly creeping out over the rest of me. That's totally not because I'm getting to lazy to draw my own rosettes... *Shifty eyes*

But yeah, technically a new (sub) species (Now a Cross Fox instead of a Red), slightly altered black pattern, fairly altered jacket and gloves, a short hairstyle, and taur shoes because no being should have to chance directly stepping on the shit we leave on the ground! Glass hurts, oil is nasty, and getting gum out of the fur between toes is hard enough when your feet are only biped length away from your hands!

Of course This is also the first thing I've put up on weasyl, so that's a good reason to put up a ref sheet anyway XD.

Jeto's rearmost paws have no claws on the innermost toe

Tail is all black save for the white fox style tip

Jeto and the art are mine