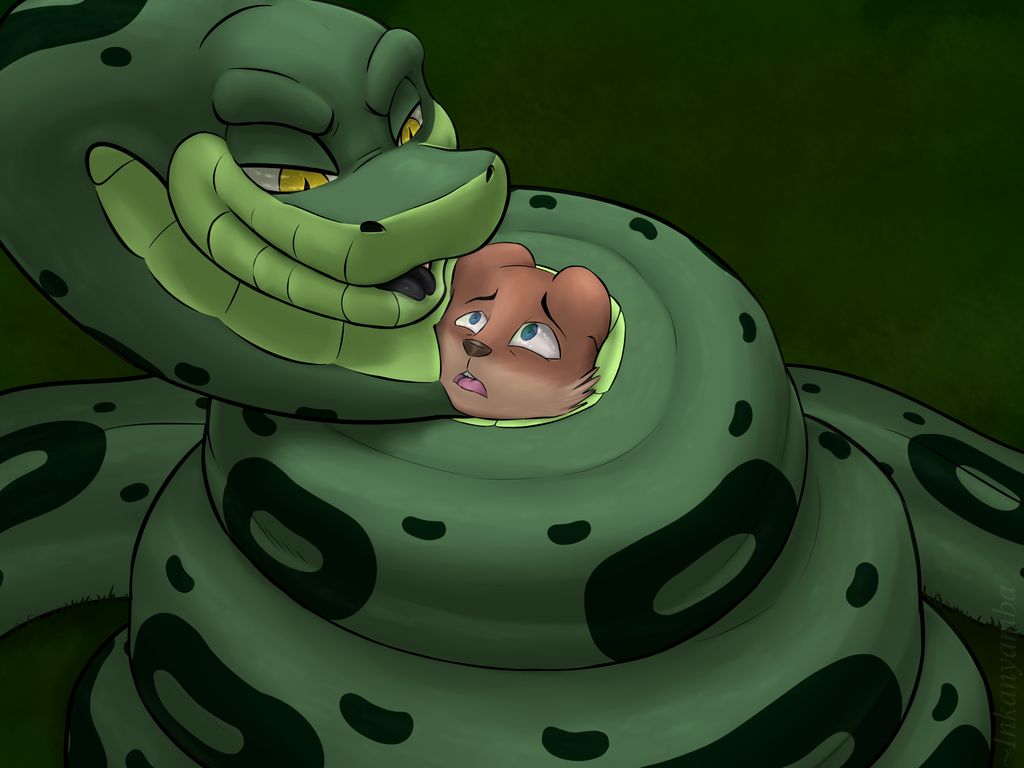 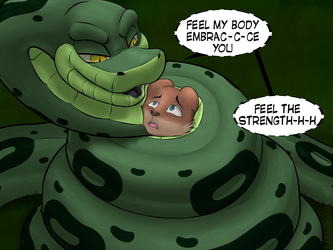 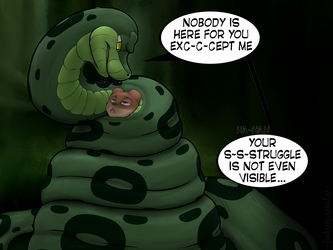 He felt the coils grasping his body with mortifying power, loop after loop, seizing his neck firmly and forcing his face upward, his terrified eyes gazing into the trees above from where his nightmare came, the python's coils progressing downward slowly and deliberately encasing his torso and supporting his weight, another loop around legs lifting them off the ground, denying him any footing, suspending him inside a tower of collapsing muscle. He felt the last coil of the giant snake's body squeeze his feet together and lay below as the serpent now rested everywhere around him, a tomb of strength standing on the forest ground which seemed so distant now.

Every new breath was coming in harder, Jajuka squeezing the rabbit's chest with calculated movement every time he exhaled; every attempt at motion was met with increased pressure on the limb he tried to move. Grasped by fear, Moka held still, too afraid to even try and breath in too deeply, hoping to take air in gulps small enough for the monstrous snake not to notice and to hold his terrifying advance.
The python's massive head moved into his vision, whispering into his ear, moving the fur on his head with his humid odorless breath: "Feel my body embrac-c-ce you... Feel the strength-h-h..."

The coils around him, thick as fallen logs, were holding unyieldingly; he could twitch if he tried, the scales of the python's body were soft to the touch, moving around on top if his skin. But twitching was the only option, the powerful muscles binding him with no remorse, the cold-blooded predator's embrace squeezing harder with every second, the unbelievaby heavy bulk bearing down on him like a force of nature.
Rabbit's eyes started rolling back, the serpent srtengthening his fearsome grasp, strangling the bunny's neck, forcing his mouth open, pulsating noise inside his head growing stronger together with the constricting pressure encasing his body. Moka tried begging again, the only hope for survival being the predator's mercy, when he realized there was so little air in his lungs he could not even wheeze. His terror escalated, in desperation he gave Jajuka a pleading look, hoping for just a single gulp of air, a moment of freedom - only to be met with a calm gaze of amusement and patience from the giant python.

His sole chance being someone, something, happening across this scene and helping him, the hope for freedom fading with every second, the bunny held still, his lungs aching for breath, taking in the boundless power holding him as the serpent wished. It this moment of hopelessness his body would be quaking with despair if he could just move a single finger.

This page with text