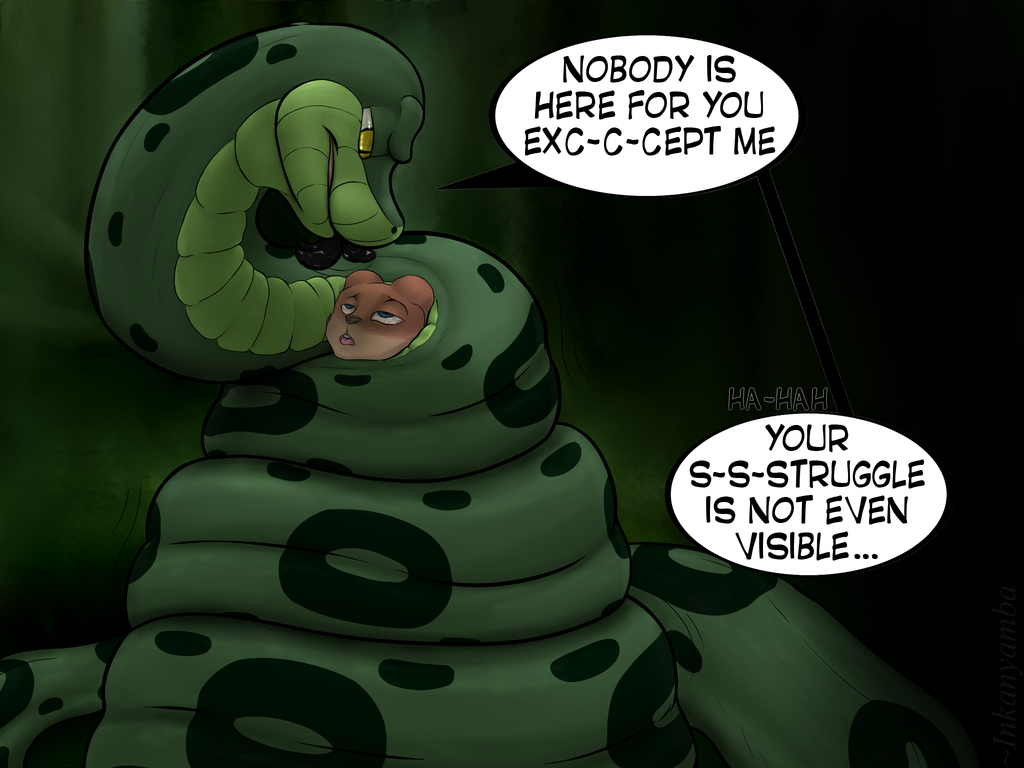 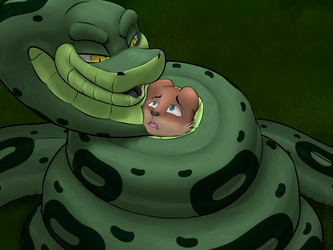 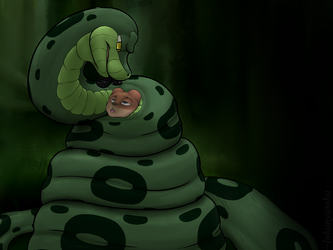 Jajuka repositioned his head above the bunny to look his prey-thing in the eye and as if reading his mind, he taunted in the slow, intimidating voice of his: "Nobody is here for you except me, my little soft rabbit. Listen to the stillness of the forest. The predator came and now he has his prey. No living thing will dare approach us now."

The realisation of that truth was the last drop of fear; the feeling of loneliness stirring his terror into blind panic, Moka completely lost control of his thoughts, basic instinct taking over, thrashing his body, tensing every single muscle to fight the massive snake holding his life in those merciless coils. But nothing happened, not a scale moved as he exerted his body over and over, pushing and squirming, the serpent giving not a hint of freedom to his fresh catch. Animalistic panic was the only thing in his mind and intense heartbeat with noise of blood rushing was the only thing in his ears for a while, until the python's voice stopped him frozen, with a soft, quiet chuckle: "Heh-heh... your s-s-struggle is not even visible..."

The green crushing coffin made another ruthless advance, compressing Moka's body, slowing the blood flow to his brain, pressing on his lungs so hard he felt as if he didn't even have them anymore. Breath was forbidden to him twice over: the immense pressure on his ribs not simply stopping him from breathing in, but denying even the attempt to – he felt his weak lungs try to expand only to be stayed by the pinning strength of the tautening embrace; his neck was strangled with the enormous power treading on from all around, assuring his asphyxiation would not lift even if his chest were released.
Another squeeze of his torso was unbearable, the body of the serpent flexing, his belly scales moving closer together as if inteding to meet in the middle no matter what was in the way. The rabbit's struggle was nothing but weak twitches now, his body overexerted by fruitless resistance, mind starved of oxygen for too long. His eyes rolled back harder, tip of the tongue lolling from his ajar mouth held from opening wide by the massive body around his neck; trying to slump his head to the side as his strength was failing, he only got the serpent to hold his face tighter, preventing any movement at all, conscious or otherwise. He felt the coils around him squeeze harder than he thought possible, the world around turning darker and the heartbeat in his ears slowing down. As darkness crept in from the edges of his vision, the last thing he saw was the hungrily flicking wet black tongue of the predator, his captor's head looming over him, watching, waiting for his prey to resign his resistance and finally accept the python's will.