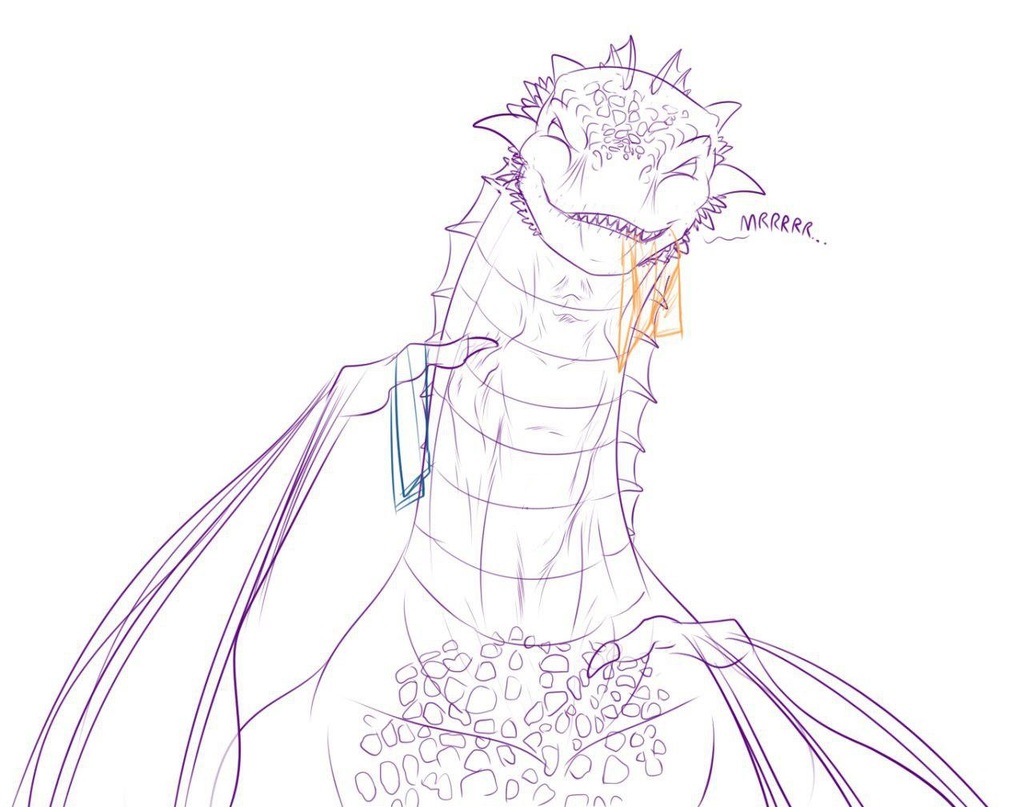 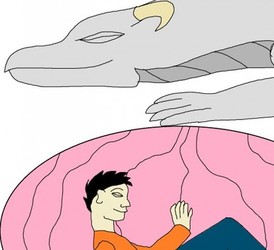 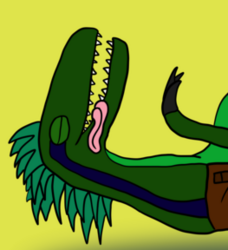 Drogon soared the clear skies, his hunger moving him on. It had been days since the last of the sheep, goats, and horses he had devoured were digested away and he was drooling at the thought of meat again. He picked up the scent of something alive, familiar. It was a human, male, like his mother but of the opposite sex, like him. He found himself squinting his eyes, pondering. He usually liked to cook his meat before he consumed it, and while he has sampled the flesh of humans before, he knew it wasn't always right. His mother would not approve, or maybe she would. She had fed a human to his brothers, they had seemed to like the taste.
Could he stomach the taste of raw flesh, it was something he had never done before. Perhaps this new idea of eating was worth investigating.

Drogon soared through the air and began his decent, landing with a thud before the startled human who had been trundling along a path with his kart of art supplies.
Issac had not had much luck selling his artworks in King's Landing and was on his way up the Kings Road to Winterfell to see if he would have any luck there. Now though, a massive Dragon had landed and appeared before him, growling and glaring. Issac had always heard tales of the great beasts and always believed they would one day return to this part of the world, he could not believe there was one now in front of him, stalking closer, and growling rather hungrily.

Drogon looked this male human over and decided that he would give him a try, his hunger was greedy and Drogon almost gave in to blasting the human with fire and eating the meat as he always did, but this human smelled...good. The Dragon saw the human was unarmed, rather foolish really, and hardly posed a physical threat or challenge. So he leaned his massive head towards the human and sniffed at him, churling and chuffing, flaring his nostrils and neck bristles.

Issac was in awe of the great beast looming over him, his head came closer and started to smell him, then the Dragon actually nudged him and pressed its snout into his palms and nuzzled along his hands. The Dragon was nuzzling him!

Drogon felt rather pleased with this human and he wasn't even sure why. He made him feel as relaxed and affectionate as his mother did, a kind of innocence radiated from him, and the human's scent was deliciously sweet and good. Drogon slid his tongue out and licked the human's exposed hands, and after drawing his tongue back in, he took a secondary taste, licking up the human's front and face.

Issac gasped in astonishment, this Dragon was being affectionate with him! This was going against everything he had ever been told about Dragons, but lined up perfectly with how his heart had always felt about them. His heart leaped though once the Dragon opened its jaws and exposed a dangerous array of fangs and teeth, saliva dripping from the maw and it's tongue wriggling slowly like a serpent ready to pounce. "Oh, gods, he's going to eat me."

Drogon pounced and nabbed the human's legs in his teeth, he did not crunch down, even though it would have been so easy to. He was going to try and devour this human whole, the way his ancestors would have done, of course they were far bigger than Drogon was now. He quickly and with a gentle growl, quickly opened his mouth and lunged forward and swallowed all in a quick motion that sucked the humans legs down his throat. The human naturally flailed and Drogon found that to be exciting, the way his regular animal prey would thrash in his teeth before he burned them alive.

Issac felt the wind knocked from him as the Draogn lunged and swallowed him up to his waist, he was caught in it's mouth and the beast seemed intend on devouring him. He wasn't ready to die, and the thought of being bitten apart and devoured scared him, yet the Dragon had not used it's deadly teeth on him yet and he was already well swallowed, what was going on?

Drogon rumbled and slithered his tongue along the human's front and pulled him in deeper, taking another throaty swallow and gulping him in his throat more. Drogon felt his neck expanding as it made room for the large prey, and he was elated. Drogon swallowed again and felt the human squirming helplessly, it made him drool even more and growl low and pleased.

Issac was slowly being swallowed whole and alive by the beast, he couldn't believe it yet it was clearly happening! The Dragon seemed to have no interest in biting him, the sensation of being swallowed whole though was really something else. Issac could feel the fleshy walls of the Dragon;s long neck pulling him down the throat, and each swallow from the beast brought a fresh wave of pulsing and tugging along his whole swallowed body. He was gulped back into the jaws and the Dragon was emitting sounds of pleasure and enjoyment. Issac could not believe this was actually happening. It looked like he was not going to be going to Winterfell after all, and instead wind up down in the belly of this huge hungry Dragon.

As the human's head entered his jaws, Drogon slowly closed them around it and once he could sense that his teeth would not poke into the human, he swallowed again and felt his prey glush into his throat. He gulped a few more times for good measure. The sensation was delicious and he rumbled out a very satisfied "Rrrrrrr" as his human prey sank down his strong neck towards his hungry stomach. This might have to be Drogon's favorite way of devouring prey now, at least humans. If he ever had he chance to properly eat one again, I would be like this. He'd have to tell his brothers about it, how delighted they would be to try it as well.

As his meal sank and filled out his stomach, Drogon considered how nice this human was, not only in taste but in temperament. He was genuinely pleased about him, perhaps he would not digest this human, but take him back to his brothers and retch him out for them to investigate as well. He couldn't let his mother know, that wouldn't do. They would have to take turns sharing this human between them. Drogon licked his lips of the tasty flavor and took of again, soaring into the sky and roaring in delight as his tasty new discovery.

Issac sloshed and curled up inside the tight sac of the Dragon's stomach, hearing it breathe and growl and roar, the gurgling and blorping of the stomach filling his ears as well. He might not have been chewed up but now there was this danger of being digested alive, and he was pretty sure that would be painful, he squirmed a little and felt as the Dragon took off began to fly, the gravity pulled the belly downwards and Issac felt himself suspended, hanging from the body of the Dragon in a way yet still tightly compacted. It was a strange yet enjoyable sensation, he would have to just wait and see what would happen next. There really wasn't much else he could do right now.

I really enjoyed Game of Thrones, and it's hard to believe that it has already been almost a year since it all ended. (I don't want to talk about it)

The fates of the Dragons was not my preferred choice, ever. They were an obvious favorite and I really wish we got to see and enjoy them so much more. There has been quite a nice amount of Drogon fanart in this community and I am glad that he always will be around in the hearts of the fans and Dragon lovers alike.

Naturally, being the vore trash that I am, I did hope I'd get the chance to be devoured by the guy in artwork form, and I am so immensely grateful to samagthraV2 for doing something so exact.

Hope you all enjoy this fanart vore art as much as I do, and please keep any GOT spoilers to yourselves for the benefit of those who have not yet had the chance to see it all.