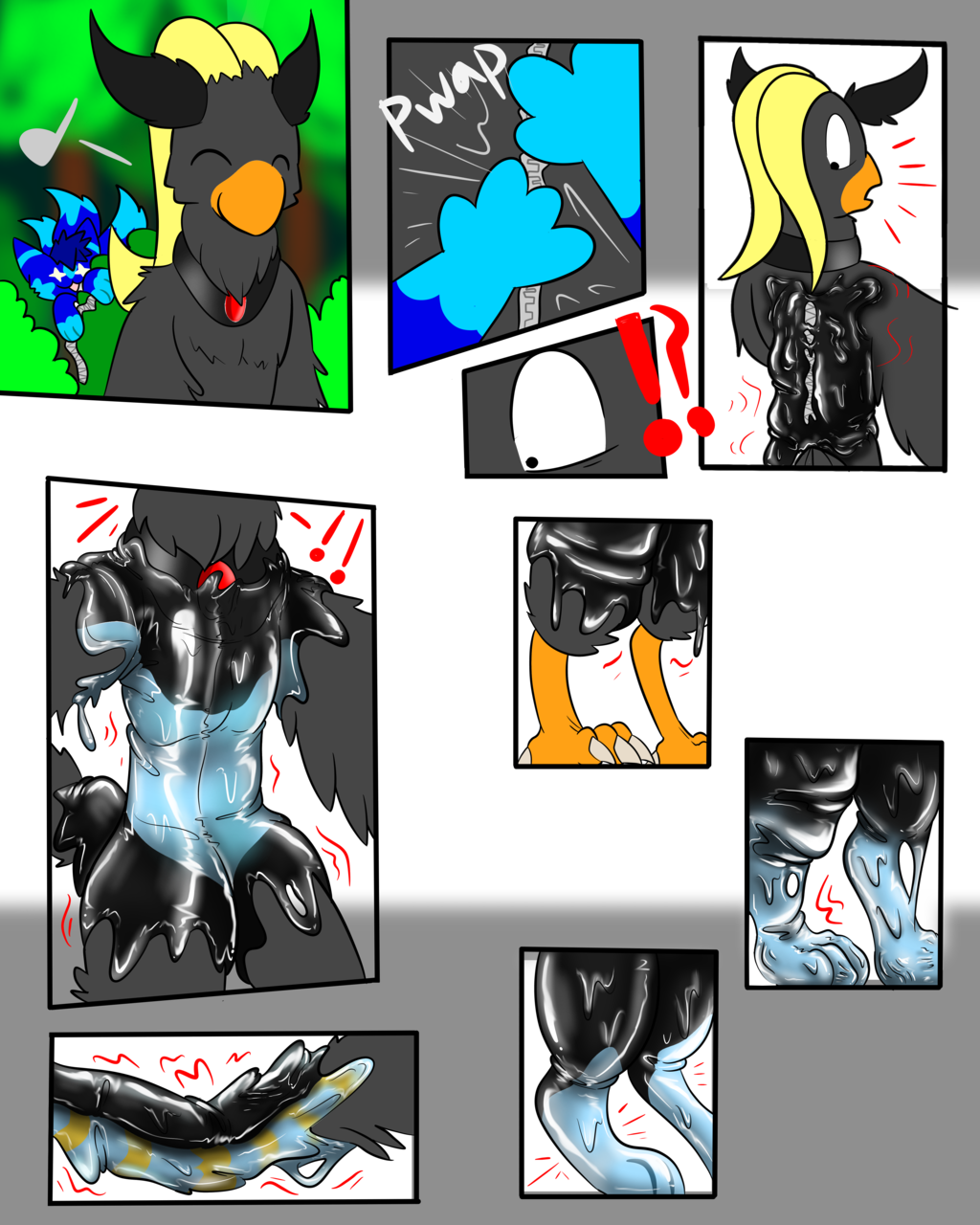 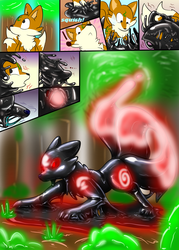 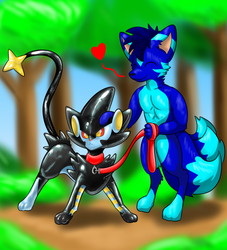 "Ah, what a wonderful day!"

Ciel happily murmered to herself as she strolled through the woods. Ah, just ambling through without a care in the world . . . what more could a magical phoenix want?

Unknown to her, however, someone was peering at her from some nearby bushes. A blue, 3-tailed kitsune was eyeing the traveller with keen interest.

"Ah, she's perfect!" How the kitsune exclaimed, making sure to hush his excitement.

"I've been wanting to test out this little magical creation of mine for a while now . . ." he giggled, holding up an ordinary-looking zipper. "If all goes well, then soon I'll have my own cute, obedient luxray pet!"

Grinning widely, he pounced after the unaware Ciel, slamming the zipper onto her back before she could even react.

"Wha?!?" she screeched loudly, taken completely by suprise. Angrily, she turned around to glare at the perpetrator, not quite aware of the zipper sinking into her tail feathers or the black gooey liquid dripping out.

"Grr . . . How dare you, fox?!?" Ciel yelled, raising up her wings in fury. She was going to give this little kitsune a nice, little punishment for hitting her so severely . . . maybe some time as her pet? Yes, this bratty kistune needed to learn a little obedience . . .

Magic radiated furiously from the angry phoenix's raised wings, ready to act on its master's whims. Ciel began to utter an enchanting spell, her powerful magic swelling inside her. . .

until it suddenly stopped.

Suddenly, the spell faltered, the magic draining from her outstretched wings . . . and into something else.

"Huh?!?" Ciel questioned, confused. Something was crawling on her back . . .

Startled, she glanced behind her to see thick, black goo rapidly spreading out across her back, feathers being smushed and smothered by sticky, thick black rubber. It pulsed and shivered, digging into her skin along with a rapidly dissappearing zipper. This . . . gooey mass was also absorbing her own magic, glowing faintly as the goo's speed and size tripled.

In a panicked frenzy, Ciel tried clawing the goopy stuff off with her wings, but to no avail - the gooey rubber simply stuck to her feathers and began oozing towards her elbows.

The goo felt icy cold, curling around her sides and painting her stomach and chest in a thick coat of blue rubber, which turned black at the shoulders.

Ciel struggled frantically, desperately using her magic to try and disperse the goo off of her. But the more she tried, the goo simply absorbed the magic, growing in strength and speed while leaving her more and more exhausted.

Finally, the goo completely smothered her wings, rendering any magical abilities largely useless. An odd but disturbingly pleasant tingling ran through her wings as the goo covering them began to constrict. Her feathers were forced towards her wingbones, squeezing tighter and tighter as the feathers crumpled underneath the staggering pressure.

However, it suprisingly didn't hurt at all, even as her massive wing feathers were squished and squeezed into painfully small . . . arms?

three round nubs formed at the end of each gooey 'arm', forming a sort of gooey paw. The gooey rubber began to squirm and flatten, digging into the feathers and skin and new colors forming and dividing. The top half became solid black, while the bottom split into blue and yellow stripes, which diverged into a solid black, gooey paw.

Ciel gasped at the overwhelmingly foreign sensation. Her wings were being crushed, condensed, feathers dissolving entirely into gooey mush. Magic spewed from them like gas from a broken pipe, farther fueling the assaulting rubber.

An odd, rubbery scent tickled Ciel's nose, and grew stronger by the second. Ciel gagged and coughed, trying to keep the foreign scent out, but it was futile. Trying to use her goopey wings to block the smell just brought the foul-smelling rubber closer to her nose!

Ciel's mind began to swim, patches of memory beginning to fog up as the rubber assaulted her legs. Small, insignifcant patches, but patches nonetheless.

And those small patches began filling with another . . . set of memories, like tiny pieces of a different puzzle.

Ciel suddenly recognized the designs of the rubber enveloping her - Luxray! Sh - she was becoming a pokemon!!!

The pheonix was no stranger to transformation, but this time seemed different. She couldn't fight back . . . she could barely remember if she even wanted to fight back.

The goo slithered over her talons, reshaping and remolding them like clay into cute, soft rubbery paws.

Wait, no!!! Ciel's mind frantically fought to regain her scattered thoughts. She . . . she was Ciel, and that nasty kitsune did this to her!!!

She silently swore to get revenge . . . but now she had more troubling issues. Her entire body was covered in luxray goop except for her head, dripping and rubbing against her skin. Her instincts, bribed and bought by the increasingly pleasant sensations the goo was sending her, begged for her to submit to the assaulting goo and mindless bliss it promised - But Ciel vowed to stand firm.

However, she wasn't sure how much longer she would last. This wasn't looking good. . .

Part 1 of my comic trade with avianine! Ciel has run into some trouble . . .