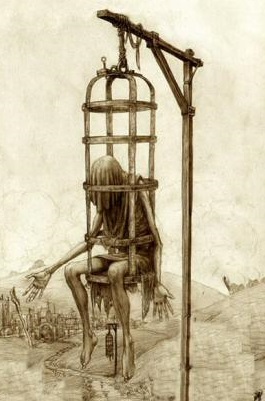 Flies buzzed around Henry's head, fighting to get at the moist corners of his mouth and eyes. He no longer had the energy to swat them away. The iron cage he hung in squeaked as it rocked in the breeze, creating a macabre melody along with the other three cages on the gibbet. There were no other sounds from the cages. The man to his left had finally stopped sobbing sometime last night. Exhausted or dead, he didn't know.

At least it was cloudy today; his skin still burned from the last two day's sun. He watched the dark clouds scudding by and wondered if it would rain. Part of him hoped it would so that he might get a bit of water, yet he feared the cold and shivering it would bring.

Henry studied the iron bars of his cage, noting the pits and scratches, looking at their curves and noting where the joins were. Anything to keep his mind off his family. But it seemed the more he tried not to think of them, the more he did.

But it was hard not to think of it, for he never would have stolen the bread that landed him in this cage if they hadn't been starving. And here he sat, utterly unable to do anything as his family continued to starve. Why was he even in here? It didn't do anything, and his family was worse off without him. Couldn't they see that?

A sharp tang of something hitting iron brought Henry's mind back. There was a whap of something striking flesh and a small grunt. With much effort, Henry lifted his head to see people below throwing rocks and detritus at the cages, cursing them without even knowing why they were in the cages, simply assuming they were criminals merely because they were hanging on the gibbet.

A rock hit him in the thigh, and though it would normally sting, in his weakened, emaciated state it felt like he'd been hit with a hammer. Rocks continued to clang off the bars as shouts rose from below. He was pelted a few more times and once something slimy splattered against him before the people moved on, and the only sound left was the familiar squeaking of the cages. His body ached and stung from where he'd been struck.

The flies returned. The man to his left began sobbing again. Not dead, then. Henry wondered how he had the energy to cry. He noticed that the air seemed to be a bit damper. It didn't scrape his parched throat as much as had before. Or maybe he's just gotten used to it. He rested his forehead on one of the iron bars, glad they were no longer burning. He tried to doze a little in an effort to escape his misery, both physical and mental, focusing on the darkness behind his eyelids to keep his mind from going somewhere he didn't want it to.

God but he was thirsty.

A crow cawed from somewhere nearby.

He couldn't remember his wife's face. Why couldn't he remember?

A horse galloped down the road.

The breeze picked up and he could feel goose bumps forming on his skin in a futile attempt to keep him warm.

The church bell rang, sounding as if were right next to him and startling him. He jerked upright in his cage, his heart pounded in his chest for a few beats before calming, but even that was enough to leave him feeling as if he'd just run from one end of town to the other. He slumped back and closed his eyes again. Though no longer interested in trying to nap, somehow keeping his eyes closed felt easier than keeping them open.

For some reason Henry noticed that something was different, but he couldn't quite place what. The creaking iron was there, the sobbing man was there, the flies were there . . . but no longer on his face. He glanced around and found them clustered around a red mess on the floor of the cage. A few lingered on his abdomen, though the juices had dried, leaving his skin sticky. Henry stared at the blob on the floor. Was it food? His stomach churned at the mere thought. He reached for it, hesitating only slightly at the thought of it being rotten, but he couldn't remember the last time he ate. It was in such a bad state it nearly fell apart in his hand as he picked it up, and he fought the repulsive instinct to throw it away. Maybe if he just swallowed quickly, in one gulp so he wouldn't have to taste it. . .

The smell of the thing, even in its deplorable state, made his hunger kick in and he shoved it in his mouth without further thought. His body was in turmoil, simultaneously wanting to reject the rotten mass and yet eager for nutrients. Finally, with much effort and will, he swallowed it. His body made one more effort to reject it, but in the end, accepted it.

Henry felt exhausted from the trial of the rocks and the ordeal of the food and slumped in the cage. How terrible to be so weak! Maybe the food would help restore his strength, help him last another day.

He shifted uneasily as his stomach roiled. Whether from the bad food, or suddenly having food after going so long without, he wasn't sure. Either way, he hoped he wouldn't vomit. He couldn't afford it.

Suddenly he wondered why he was holding onto the thought of tomorrow so strongly. He would still be stuck in this cage tomorrow. No one ever came out of the gibbets. The bones he had kicked out of the cage and the bloated corpse to his right were a testament to that. Henry thought again of his family and his hopeless predicament, and was overcome with sorrow. He would have sobbed along with the other man if he could have managed to do so.

Perhaps I am already dead, he thought. Perhaps I am dead and this is purgatory. Surely I will be permitted to heaven after this suffering.

Try as he might, Henry couldn't get himself to believe it.

The man sobbed, the flies buzzed, the cages creaked, and it began to rain.

I was reading a book on medieval torture and decided to try to write a story exploring the thoughts and emotions of what it might have been like to be in a gibbet.

I don't really like it and am not very pleased with it, but perhaps someone can find something salvageable in it.

Art is not mine. I just found it somewhere on the internet.