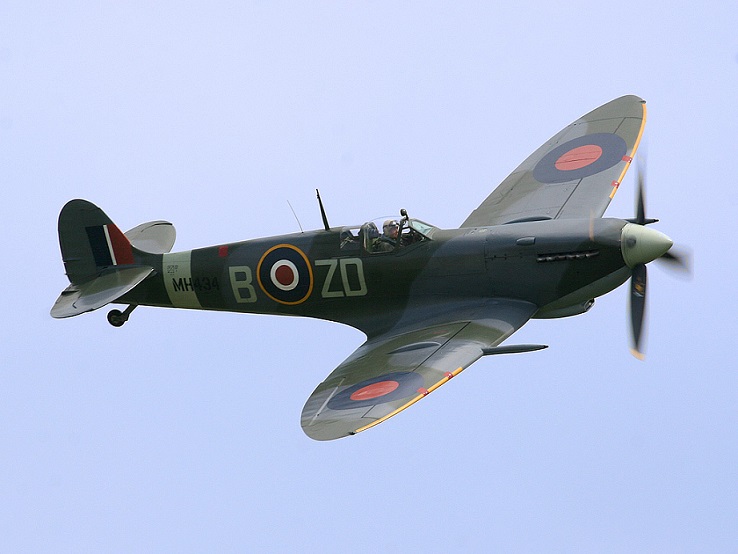 Carter trotted anxiously onto the tarmac. "How's my girl doing?" He asked, affectionately patting the tail of the Spitfire Mark VII. Had any of his wing mates been nearby, they likely would have called him weird. No doubt Hansen would ask when he's gonna marry it.

He didn't care. Let them jeer. Flying was his passion, and the Spitfire was a masterpiece of an aircraft, as sleek and beautiful as it was agile and deadly.

He quickly went through his preflight checks and scrambled into the cockpit. A thrill went through him as he started the engine. He was about to get airborne! He cleared for takeoff with command and headed down the runway. As he lifted off he could see the rest of his squad drifting out to their planes. He could just make out Hansen looking up and shaking his head at him. Carter wondered if Hansen was disappointed that he hadn't gotten to say his marriage line, and chuckled.

Carter made it to cruising altitude. Well, now what? Patrols were not his favorite thing--he preferred more action--and though typically any excuse to get his girl into the air was good enough for him, today he was feeling restless. He craved another battle, another opportunity to see what his lovely Spitfire could do.

Well, why do I need a battle for that? He thought suddenly. A mischievous smile spread across his face, and he pushed the throttle forward. Then, on a whim, he pulled back on the stick and began to climb.

Carter's headset crackled and Hansen's voice came on the line. "Carter, we're at the first rendezvous point. Where are you?"

A moment of bewildered silence then, "What?"

Carter didn't answer, keeping his eye on the altimeter. There. 35,000 feet. Maximum altitude. Or so he was told.

Hansen was chattering at him through the headset--or more likely scolding him. Either way, he didn't listen. He was riveted to the altimeter. Ever foot he rose was one more they said he couldn't. The plane was shuddering and shaking beneath him, giving her all for him.

Then the engine sputtered, and died.

Riding on momentum, the plane continued on for a few more seconds, almost hovering in the air. Then the nose fell, and Carter's heart with it.

The plane plummeted, eerily silent. Hansen was still on the radio, this time yelling at him, his voice somewhere between angry and concerned.

Fighting the effects of gravity, Carter tried desperately to bring his plane back to life, pulling any lever or switch he thought might help.

"C'mon, baby, c'mon!" He urged, willed the plane to work, flipping the ignition.

The altimeter continued to tick back at a frightening pace. What was the minimum altitude to bail? He couldn't remember--didn't have time to think. But he was sure he was approaching it fast.

Then--the most wonderful sound in the world--the engine roared to life again. Carter pulled back on the stick as hard as he could, recovering from the dive and let out a whoop of joy.

"Carter? Carter! Goddammit! What the hell are you doing?"

And for some reason, Carter laughed.

Back on the ground, Carter faced the commanding officer.

"I want to know exactly how you managed to nearly kill yourself on a simple patrol," the officer said, his voice hard.

Carter shrugged. "I wanted to test my plane, to see what she could do."

The officer pressed his lips into a thin line. "We know very well what our planes can do--"

"No you don't," Cater interjected, heedless of protocol. The officer's eyes sparked in anger, but Carter continued excitedly. "Sir, I was over 45,000 feet before the plane stalled!"

The officer hesitated only a moment. "Regardless, that's why we issue limits. . ."

The officer had expertly hidden it, but in that split second, Carter had seen his surprise. He really hadn't known!

Carter wondered what else he could get his plane to do.

I like to play a little game with myself to test out my writing ability. I take a word--any random word--and make a short story of it. Thing is, I don't think about it. I instantly start writing, whatever comes to my head. I fly by the seat of my pants as I'm writing. I never know where the story will go.

I should also note that instant stories are supposed to be short and vague. Otherwise I'll put too much thought into them, and want to work longer, and it won't be so "instant" anymore. XD Although this one wasn't exactly instant, because I kept forgetting to write it for like two weeks. >_>

Since I was both vague and esoteric on this one, I feel the need to explain myself. However, please do not read this until after you've read the story. Anyway, the first thing I thought of when I was given the word "envelope" (aside from a mental image of an envelope) was the phrase, "pushing the envelope." Not too long ago I learned that the phrase originated in World War II, when pilots would push their planes beyond the recommended limits, which was known as a flight envelope. Thus, brash Carter was pushing the flight envelope in this story. Though, I was tempted at the end to make the officer say, "Regardless, that's why we have flight envelopes..." but didn't feel like being so cheeky. I also wanted to avoid using the actual word in the story.

Also, apologies to any pilots out there; I'm sure my lack of knowledge is glaringly obvious. I have a few books about the Spitfire, I just haven't read them yet. Besides, accuracy is not the purpose of these instant stories. Though I did look up the flight ceiling, because I knew I couldn't guess my way out of that one. XD

So, wanna help me? Pick a word.