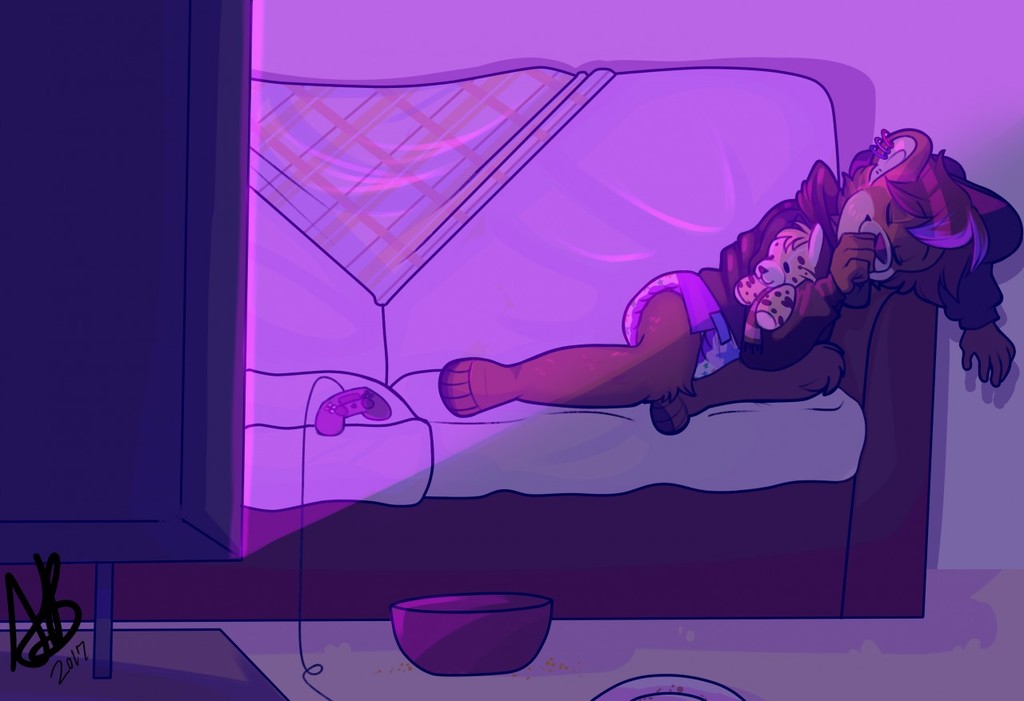 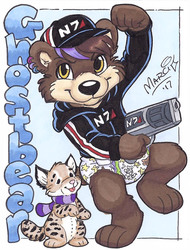 "Now I got it, Sammy. See?"
Sitting on the floor, surrounded by unhealthy snacks and wearing a comfy hoodie with the Deus Ex Mankind Divided Logo, fitting baseball cap with the Transhumanism logo and a thick nighttime diaper, Sascha was carefully sneaking around the corners and had almost reached his destination with his Deus Ex protagonist.
He already had tried this particular mission three times now, each time had been caught early and the augmented agent he controlled shot into virtual pieces.
But he was doing much better now.
For a moment, Sascha let go of his controller, stifled a yawn and stuffed the last handful of crisps into his mouth. Washing it down with some juice from his sippy cup, he climbed from the floor he had been sitting for the last couple of hours onto the more comfortable sofa, before he took up the controller again.
Saving the game, so he didn't have to do the whole approach again he continued the game and Adam Jensen was on his way again.
Yawning again the bearkitty rubbed his eyes and took of his basecap to scratch himself behind one ear, causing it to flick, then absently gave his faithful companion Sammy a few pets.
Suddenly red lights started to flicker, an alarm klaxxon sounded and heavy footsteps approached.
"WHOOPS"
While petting Sammy, his controller fell down on the floor, landed on one of the buttons...causing the player character to leave their cover.
Before he could dive back into safety, heavy fire from automatic weapons filled the room.
Game over. Again.
"Awwww, Poo..."
Snatching the controller from the floor he just wanted to reload the game, when he caught Sammy's expression from the corner of his eye.
The long tailed lynx seemed to be pretty unhappy with his young owner, both for playing videos games for so long, missing normal bedtime by several hours and (which was far worse) for not getting enough cuddles and snuggles.
Feeling guilty for neglecting his plushie friend gave Sammy a little boop on the nose.
"Yeah, you're right. I'm sorry, buddy." Sascha set down the controller on the couch, then stretched out with an audible crinkle, resting his back on the armrest, before pulling his stuffed friend into his paws "Come here, Sammy. Let's snuggle for a bit... then we can continue gaming."
For all his video gaming and all, Sascha was always ready for some cuddles...and despite everything, he was still a little boy.
It didn't take long for him to drift to sleep and within minutes he was out like a light, peacefully sucking at his thumb and still wearing his Deus Ex clothing and basecap.
Cradled into the little bearkitty's arms, Sammy seemed to smile at his young owner.

Very adorable and peaceful and some gorgeous lighting, drawn by the very talented and friendly  starrysproutling

A while ago I got a very awesome latenight gaming picture of my little bearkitty, playing video games and stuffing his face with unhealthy snacks from applepup
( https://www.furaffinity.net/view/23262555/ )
And I though: This picture needs a sequel.
So.. here it is :3 And Starry really nailed down the scene with Sascha being totally zonked out after playing too long and probably a bit of a sugar crash is well.
Thank you very much! It's so adorable and peaceful :)