Time of falling lynxes by Ghostbear 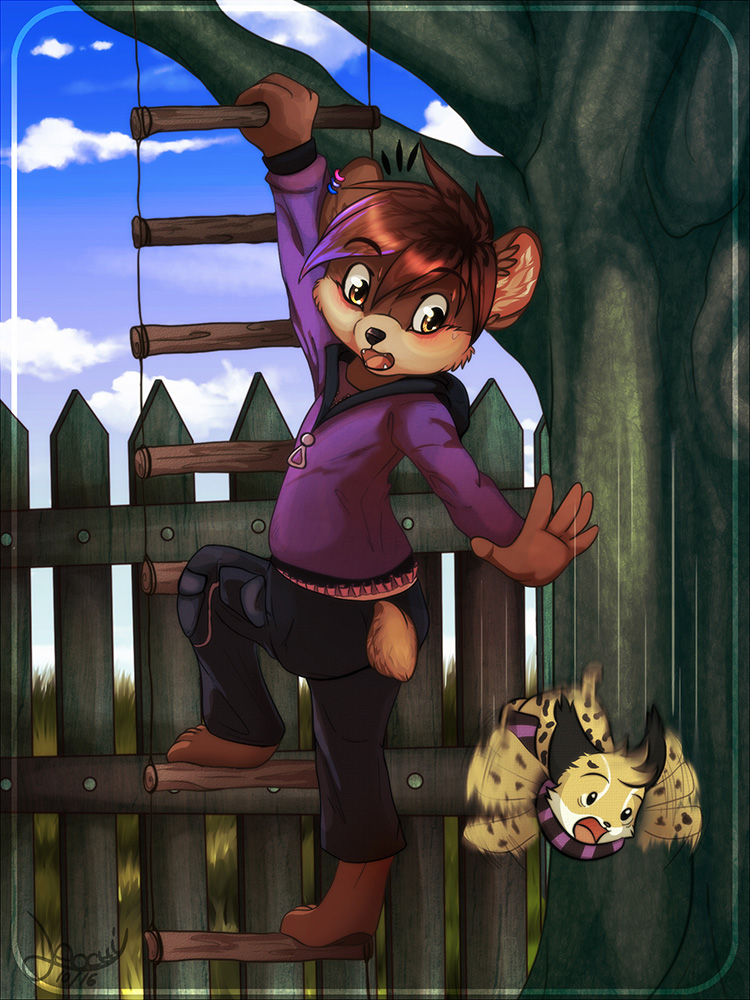 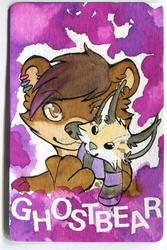 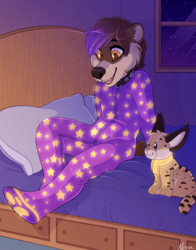 "M...Morning Sammy" Yawning Sascha lifted his head from the pillow and gave his favorite plushie friend a gentle nuzzle. Golden sunlight was shining in his room, exactly on the bed, which woke the up the little bear-lynx hybrid.
And it was warm in the room, despite already being October.
That chased away the rest of his sleepiness.
"Hey ... look!" The young ursine lifted the stuffed lynx up to the window. "See that, Sammy? It's still summer. Let's go play outside in the treehouse, okay?"
Sammy wasn't much for words, but he seemed to agree, so Sascha climbed out of the bed and waddled into kitchen to see if breakfast was ready.
Lucky for him, it already was.
After a generous application of warm rolls, nutella and hot cacoa ... and after the inevitable pitstop, he dressed into his comfy hoody and a pair of pants, which belonged to his set of Mass Effect clothes. Sadly his N7 hoodie was in the laundry, so he chose a purple and black hoodie instead.
Somehow Hoodie always managed to slip up a little, revealing a purple and white waistband, but Sascha didn't care. Playing outside was much more important than a little pull-ups peak.
Grabbing Sammy he kissed his step mum goodbye for the day and quickly headed outside into the garden, where his step dad had built an awesome treehouse a few years back, for Sascha and his brother to play in.
A rope ladder was the only way into the tree house, but the ursine was a pretty good climber.
Well, not surprising, being a hybrid of a brown bear and a lynx.
Quickly he arrived at the platform where he placed Sammy on the edge of the wooden planks, so he had a good view down.
Looking down himself, he noticed, that he had lost his little nylon collar. The collar with the pawprints and white paint blotches was Sascha's favorite collar and he was pretty much wearing it all the time. In his eagerness to play outside however, he had just stuffed it into his pocket and had planned to apply it later. Now it was lying in the grass beneath the treehouse, right next to the big pile of leafs he stepfather had gathered.
"Wait here..." he told his plushie companion "...I'll just get my collar. I'll be right back."
Sammy seemed to nod in agreement, so the little ursine swung himself over the edge again and climbed down the swinging ladder. Gathering up his collar and stuffing it into his pocket again, he was on his way back quickly.
Halfway through his ascent a sudden and pretty strong gust of wind managed to knock Sammy over.
Before anyone could react, the long-tailed lynx plushie was toppling over the edge of the treehouse ... and was on his way down the short way.
"WAAAAAAAAAAH!"
Flapping his front paws wildly in a futile efford to fly (which didn't work of course because cats don have wings) Sammy was plummeting down with a look of pure terror on his face.
"Sammy!"
With an equally shocked look on his face, the bearkitty tried to grab his companion, but it was too late ... the beloved plushie was going down. As an additional effect his sudden movement had almost dislodged him as well and he had to cling to the ladder to avoid falling down himself.
What was it again? Cats alway land on their ... faces.
Ouch.
All Sascha could do was watch and hope for the best. Obviously it was the time of falling lynxes.
Hopefully he would hit the big and soft pile of leafs. Trajectory was looking good at least...

A wonderful, cute, funny and slightly evil commission I got from the amazing  laochi
For a long time I had planned on commissioning her again for a picture of my little bearkitty ... and here it is. ^_^
And it is awesome!
Although Sammy will probably be a little mad at me, if I show him the picture.
Still, the picture is funny as heck and Lao pulled it off great. Love the background and the pure dynamic of the picture.
And Sammy futile flapping of paws ... poor guy. ^.^'
Thank you so very much! I love it!