Folder:
Commisions made for me « Older 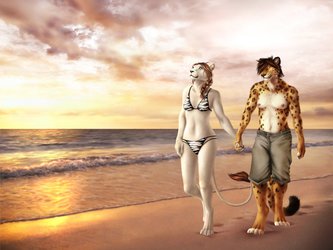 Friends Day Off by Jocarra

I am really proud to present the biggest commission i ever gave. It was created by the very talented and professional working Jocarra.
Its a group picture counting 14 characters, belonging to some of my friends. Hope you enjoy it as much, as we all do. I am lost for word to describe, how much i like it. Sadly i had to really size it down, so i would be able to upload it here.
The orignal artwork is about 0,25m x 1,69m

From left to right you see:
On the left side Pat takes a hike. His charakter is an aardwolf / hyena mix. He seems to be on his way to the beacht to spent a relaxing day there.
Next, sitting on the bench is Johann, the wolf. Always busy, even on his day off, spending time to do some workout.
Momoli the snowhare snowleopard hare. Practicing archery today.
Zero the hare, helping with holding an apple as a target for Momoli. He does not seem to comfortable with that. XD
Furan Ircas the leopard is just sneaking up Asmodina to tickle and startle her a bit. He seems already to picture her jumping up and scream. :P
Asmodina, the pink fennec. She just sits on the ground and watches the others. Seems she did not yet notice Furan sneaking up to her.
Nienna, the northern fox looking from the back of a tree, flirting with Chevalo, the irish cob stallion.
Tigg is a smilodon snowleopard mix. Laying there, trying to groom herself. Brachmiros, the dragon wants to help, but she does not like that, so pushing him away with her paw.
Breehy, the talking horse from Narnia enjoys a good roll in the grass. In his time of slavery at Calormen he learned how to roll around like the normal horses and loved it. He never thought, that the talking horses of Narnia would do that too and his proud forbid him, to roll around like that, as he returned to Narnia. Later he learned, that the narnian horses just love to roll around too and since then he just loves to roll as much as possible again. ;)
Keera, the cat is amused watching Breehy roll around. She just enjoys the sun at the side of Shirecku, the white lion.
On the beach Strife enjoys his sandwich. But thats not all. Just look, what nice stuff he still holds in his basket.