[Fumi in a Nutshell] Part 2: Aging and Classes by fumi-LEX 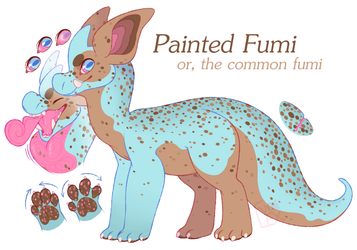 [Fumi in a Nutshell] Part 2: Aging and Classes

Fumis are a closed species, meaning you may not make your own. Customs and MYOs are currently closed

Larger image can be found here

A mother fumi's gestation lasts for a period of 8 months, which typically results in the birth of 1-3 newborn fumis, called puggles.

Puggle, birth - 2 years
A puggle gets it's name from it's wrinkly skin, which a mother fumi can grip easily. A puggle's eyes and smoke sack remain closed for the first week of it's life, and develop slowly even after they open and develop, but it's already acute sense of smell helps it recognize who is mom or a nurse, and who isn't. They can make alarmed gecko chirps to alert the mother if they are in danger, but they prefer to remain hidden and silent, letting their totally brown colors blend them into their surroundings. Baby fumis are fed pre-chewed fruits by a nurse fumi for a short time but quickly adapt to chewing their own food after a couple of weeks.

Rookie, 2 - 5 years
A juvenile fumi is known as a rookie, at 3 years they start going through a process known as 'spotting' where it's adult colors come in as spots that gradually grow until the fumi is completely adult colored. At 4 years of age they go through fumi puberty, non-nurse fumis growing larger in general body size as well as horn(s) and tusks.

Adult, 5 years - death
Adult fumis of the painted and dwarf breeds appearance and behavior as well as their social role is greatly influenced by hormones, there are 3 classes that a fumi will fall under depending on it's hormones. For more detailed information on fumi social behavior, go here.

Nurse: The 'submissive' extreme of the hormonal gradient, they typically are very even-natured and submissive. Nurse fumis are typically smaller in body, tusk, and horn size, and oftentimes have smaller feet as well. The role of a nurse in a fog is to raise puggles and rookies, as well as to protect valuable possessions. They stay in the nesting site and typically grow much fatter due to a more sedentary lifestyle, this may be to attract predators to attack and eat them rather than the puggles and/or rookies they may be protecting, and it is not uncommon for them to martyr themselves for the children. They are considered the least attractive members of the fog and are the least likely to breed (they definitely won't be breeding as the male, as that requires them to win the mating fights which they would not normally attempt, as they are very submissive) HOWEVER they are greatly respected by the rest of the fog and are protected just as fiercely as children would be by the rest of the group.

Thug: These fumis are what you would consider 'average', they fall somewhere in the middle of the hormonal spectrum, and can be more dominant or more submissive depending on the individual. Thug fumis are typically average in body, tusk, horn, and feet size. The role of a thug, when not filling the role of a brute when there isn't one present in the fog, is to gather food and resources for the fog, or to scout the area for danger. They may fill the role of a nurse if there is no nurse present in the fog.

Brute: The 'dominant' extreme of the hormonal gradient, they are more aggressive and dominant. A fumi is never born as a brute, this is a class that a fumi becomes when it wins many mating fights and becomes permanently changed from the surges of hormones that comes from winning. Brute fumis are typically bigger in body, tusk, horn, and claw size, and they have much bigger front feet and smaller back feet, as well as a more lean/muscular build (although a particularly gluttonous brute can still be fat). The role a brute plays (other than just being leader) is also protecting the other fog members and it's territory, much like a male lion would protect it's pride, they generally stay around the nesting site.

Death
Fumis don't seem to age much physically, but often live to the age of 50, where they gradually lose the ability to use their vapor properly and it leaks into their lungs, eventually drowning them. The cause of this has been determined as age or [REDACTED].

Species, art, and character belongs to me. Fumis are, again, a closed species.