[Fumi in a Nutshell] Part 1: Basics by fumi-LEX 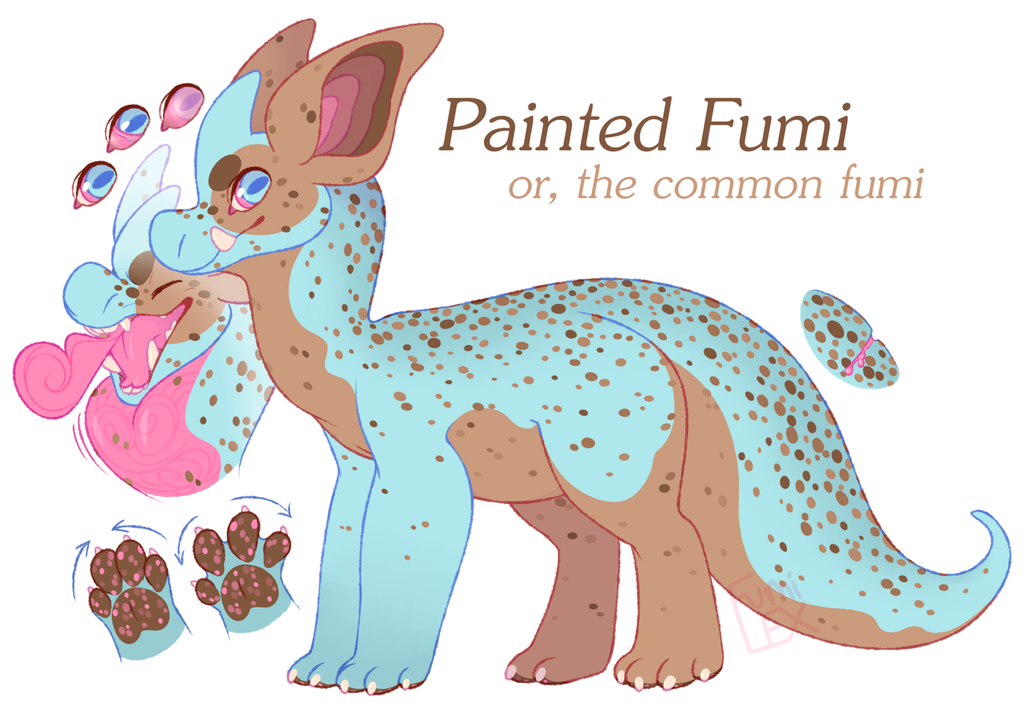 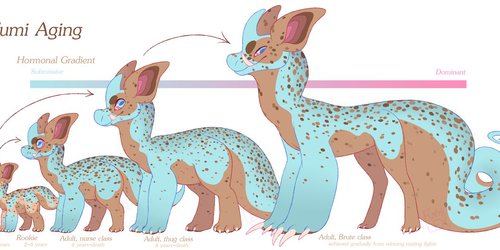 [Fumi in a Nutshell] Part 1: Basics

Fumis are a closed species, meaning you may not make your own. Customs and MYOs are currently closed.

Pictured above is what one would consider the most 'common' type of fumi, the Painted thug class fumi. It is the most practical example of the breed's basic traits, so it will be used as the model for this guide.

First discovered in the [REDACTED] star system on the planet known as Eremus, whose surface is currently inaccessible due to extreme [REDACTED]
Diet: opportunistic omnivores with diets consisting of mostly berries/fruit, fish, and small animals.
Size varies greatly depending on class and breed. Here is size chart, in the chart, the thug fumi's head would be level with the head of a human with average height
Role: companion animal. Most fumis are found in captivity but a few small feral populations do exist. Their vapor is used recreationally for it's soothing and slightly addictive properties.

They are intelligent and social creatures, a level which is comparable to orcas. Whether or not their are sentient is heavily debated, it is generally considered to be [REDACTED] Fumis form groups of 5-15 called fogs with roles determined by a fumi's class, more on that later.
Fumis communicate primarily with their vapor and body language. Any vocalizations are purely for the benefit of species that can't understand vapor communication, and sound like gecko chirping. Detailed information on body language and expression can be found here.

Quadrupedal; digitigrade; 4 digits on each paw. Plump body for nutrition storage (tail, belly, front limbs, and rump) Their body shape, webbed feet, and hairless/thick skin make them good swimmers, and they quite enjoy floating or wading in water. They also most enjoy walking on sand, their wide, flat feet help evenly spread their weight and prevent sinking, and their functioning nictitating membrane (third eyelid) clears their eyes of debris. A fumi's large eyes, ears, and nose help it to be a creature who is very aware of it's surroundings, but they typically show little fear. The fumi's horn(s), tusks, claws, and brute strength/size give them protection against most threats so they don't have a whole lot of things to be scared of, but they won't protect the fumi fr[DATA EXPUNGED]. If a fumi does encounter danger, it can use caudal atotomy to 'drop' it's still-wriggling tail to distract the threat while it makes it's escape. The tail will grow back, but it will commonly grow in discolored and even kinked (unless a splint is used to keep the tail unkinked).

A fumi's body contains a substance known as aether, which is the source of the fumi's vapor. Aether in the fumi's blood help the fumi regulate it's body temperature (yes they are warm to the touch) and most likely serves other undiscovered purposes. The fumi's blood, inner flesh, vapor, and part of the iris are always the same color, as it is the aether that gives them their color, fumis that break this rule have something very wrong with them.

Every fumi has a squishy/delicate area located somewhere on the neck called a vapor sack. This area can be inflated, and becomes transparent enough to see the colorful, slightly glowing vapor that the fumi exhales into it. Some thick patches of skin may remain opaque create a pattern on the inflated sack. The fumi's vapor has a soothing effect when breathed in, it is sweet smelling and slightly addictive. However when the fumi is distressed, they produce a darker colored vapor which, along with smelling disgusting, may cause horrifying hallucinations with prolonged exposure.

Fumis are considered bidirectional sex changers, a type of sequential hermaphrodite, who are sexually female by default. When certain conditions are met and a fog enters a breeding season, dominant fumis duke it out tournament-like style. The champion of the breeding season is flooded with hormones which temporarily allows it to preform as a male, which it will do with the fog members that where the most attractive (this tends to be the ones who put up the best fight, but may be different depending on the individual).

Fumis do not naturally have the same concept of gender as humans do, but may adopt it from their caretakers if they wish. A fumi may identify or be referred to with whatever pronouns hey wish.

There will be more nutshell guides soon. For now, all other information can be found in the following links:
All About Fumi
Fumi information pack
Fumi Ownership Rules
Masterlist account

Species, art, and character belongs to me. Fumis are, again, a closed species.