Arturo and Biro go to Camp (Chapter One) by foxfan1992

Arturo and Biro go to Camp

It was a warm, summers' day at the Birds-of-Prey Camp. Two friends - a twelve year old raccoon and a ten year old fox, were sitting alongside a few other children. The fox was singing with the other children, but the raccoon was unhappy. He got up and wandered over to a log, just a short distance away.

"Oh... what a racket" thought the raccoon as he sat down, "This is the last time I go to camp, whether it's with Biro or not"

Just then, another fox sat next to him.

"I know what you mean" said the fox, "I don't like singing along to those songs either"

The raccoon wrote in his notebook and showed it to the fox.

"Did your parents make you come?" it said

"No... I'm here with my two friends - Jake and Timothy" replied the fox

The raccoon wrote in his notebook again

"I'm here with my friend too. But he's singing with the other children"

"I see" sighed the fox, before asking: "What's your name?"

The raccoon showed Friendly his notebook

Art nodded with a small smile on his face.

"My name's Harry... but everybody calls me 'Friendly'" replied the fox

"I'm glad I met you, Friendly" it said

"Hey! No wandering allowed!" said a camp guard, sternly, "Get back to the group!"

Art folded his arms and pouted at the guard, but this seemed to achieve nothing. Art and Friendly soon found themselves sitting alongside the singing children again, but they didn't sing along.

Once the songs had all finished - much to the relief of Art and Friendly, a camp leader started to speak.

"Right... we're going to sort you into tribes"

Art groaned and pouted at this news. He wanted to stay with Biro - his ten year old fox friend.

All the children took out slips of paper, which read their tribe name on it... (Falcon, Vulture or Owl)

Biro looked at his slip first.

Art looked at his slip next. It read "Vulture tribe"

Art couldn't help himself from crunching the paper in his hand at the news he would be separated from his friend, however he straightened it out as he realized Friendly still hadn't read his slip of paper.

"They must be Jake and Timothy" thought Art

"Owl tribe!" cried the raccoon, excitedly; but then a his face looked sad...

"But... we're separated. We won't be together!" sobbed the raccoon

"Hey, don't worry about it, Timothy" said the german shepherd, "After lunch, we're allowed three whole hours to explore this place together!"

Art couldn't help a small smile from crawling across his face. Biro wouldn't be leaving him for another four hours - and he had some new friends too!

"Well, we're in the same tribe!" Biro said to Timothy, "We're like brothers!"

"But... what about Friendly...?" answered Timothy anxiously

"It's alright... the vulture tribe and owl tribe huts are opposite each other!" said Biro, "Look!"

After the boys had had their lunch, they went over to their bikes - which were sitting between the Owl and Vulture tribe huts. Art and Biro got to their bikes first, but Biro was the first to ride away. Art looked at the smallest bike - it was a red one, with a black saddle and a pair of training wheels.

"Whose bike is that?" thought Art, when he noticed Timothy clambering onto it. "Oh... it's Timothy's"

"Finally... I thought we'd never get to ride our bikes!" said Friendly

"That was a splendid lunch though" answered Jake

"Yay! Yes! I love to ride my bike! Come on Art!! I'm sure I can ride faster than you" chuckled Biro

"I'll go as fast as I can!" answered Art, with sign language. He took off after Biro.

Friendly and Jake clambered onto their bikes and rode with Art and Biro, Timothy rode a short distance behind.

"How far away can we go from the camp?" asked Biro, "Aah doesn't matter!"

Art discovered at the top of a hill just how beautiful the forest was. The lake was really big and clear. He stopped for a moment to appreciate it. He took his notebook out of his pocket and started a quick sketch of the place.

"I like the look of that lake... we should go swimming when we get a chance, Art!" said Friendly

Art nodded his head in reply

"Can I see your drawing?" asked Biro

"When we're in the cabin I'm going to start it" said Art, using sign language

Timothy stopped to catch his breath, with his bike resting on some thick mud.

Art sat down on a rock, really tired and with his tongue hanging out. He put his head on Friendly's shoulder for a moment, but he pulled back quickly and put on an embarrased face, blushing slightly.

"It's alright... I don't mind" said Friendly, putting his arm across Art's shoulder.

Art looked at the eagle with really big surprised eyes, he took his notebook out of his pocket really quickly and started to draw it.

After a few minutes, Biro was getting impatient.

"Well, can we continue? I want to go to the lake!" said Biro

"Yeah, okay!" said Timothy, he turned his pedals, but his bike didn't move.

Everyone else headed down the path, but Biro looked back and noticed that Timothy was struggling.

"Hey, what happened with you?" asked Biro

"Whaa??" cried Timothy, he turned his pedals and looked back - the wheel was spinning but he wasn't moving; "I think I'm stuck!"

Timothy tried harder, but his bike just kept slipping on the thick, sloppy mess under its wheels.

Just then, Art came along and stood next to Biro.

"Hey, look, our friend is stuck in the mud" said Biro

Art started to laugh inside his head. He had known all along that Timothy's training wheels would probably cause his bike to get stuck in something. He looked at Timothy's bike and he felt a fresh wave of laughter in his head as he watched the wheel of the little bike spinning helplessly in the mud.

However, as he looked at Timothy's face and realized how worried the younger raccoon was, he didn't find it as funny anymore.

"Come on, Art. Let's help him out" said Biro

Biro and Art stood behind Timothy's bike and started to push.

Timothy pedalled as hard as he could.

"Oh no! Help!" whimpered Timothy as mud splattered across his shorts.

"Oh wow, you have little wheels..." said Biro, noticing Timothy's training wheels on his bike, "...have you ever tried to ride with only two wheels, Tim?"

"I can't ride without my training wheels!" exclaimed Timothy

Timothy tried harder to pedal his bike, but it just kept slipping and spinning in the thick mud.

Art stretched his arm to Timothy, signalling him to stop.

Timothy stopped pedaling his bike, but he couldn't help a tear from falling down his cheek.

Art wiped the tear from Timothy's cheek and hugged him. Timothy hugged Art tightly, sobbing into the older raccoon's shoulder.

With a final effort, Art and Biro managed to push Timothy's bike out from the worst of the mud.

Just then, Jake and Friendly came back to see what had happened to Art, Biro and Timothy.

Friendly noticed the tire tracks of Timothy's bike, and a deep trench where his bike had struggled in the thick mud.

"Did Timothy get stuck?" asked Friendly

Timothy clambered back on his bike and pedalled it, but he still didn't move

"I'll teach your friend to ride on a bike with two wheels" said Biro to Jake, before turning to Timothy.

"Could you try right now?" asked Biro, offering his own bike

"I'll... I'll try. I will try - but maybe after we've been to the lake" he said. After much slipping and spinning, his bike finally came free of the mud.

"Timothy's bike always get stuck... whether it's mud, snow or gravel. I can only chuckle as I watch him trying to get it out" Friendly whispered into Art's ear. Art almost burst out with laughter, but he covered his mouth with his hand to conceal as much of it as he could.

Once Timothy had regained his breath, the friends continued riding, until they arrived at the lake.

"Oh, what a wonderful place!" thought Art, with a big smile drawn across his face

"I've tried to get Timothy to ride a two-wheeler, but he's just too frightened" said Friendly to Biro

"I told him that I can teach him, I'm sure hes going to learn" replied Biro.

"I certainly hope so... the other cubs will probably tease him for still having training wheels" sighed Friendly

"Wow! I like this place! Let's go swimming!" squeaked Timothy

"Woooooooow yes, it's really nice!! Well, what are we waiting for? Let's go!!" cried Biro, happily. 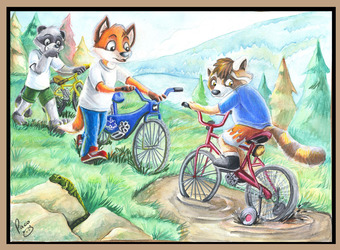 Arturo and Biro go to Camp (Chapter One)

A story based on an RP... (there will probably be a few stories I post from now on that are based on RPs).

This one is about PandaPaco's characters Arturo the raccoon and Biro the fox at a Camp with my characters Friendly the fox, Jake the German Shepherd and Timothy the Raccoon. This is Chapter 1.