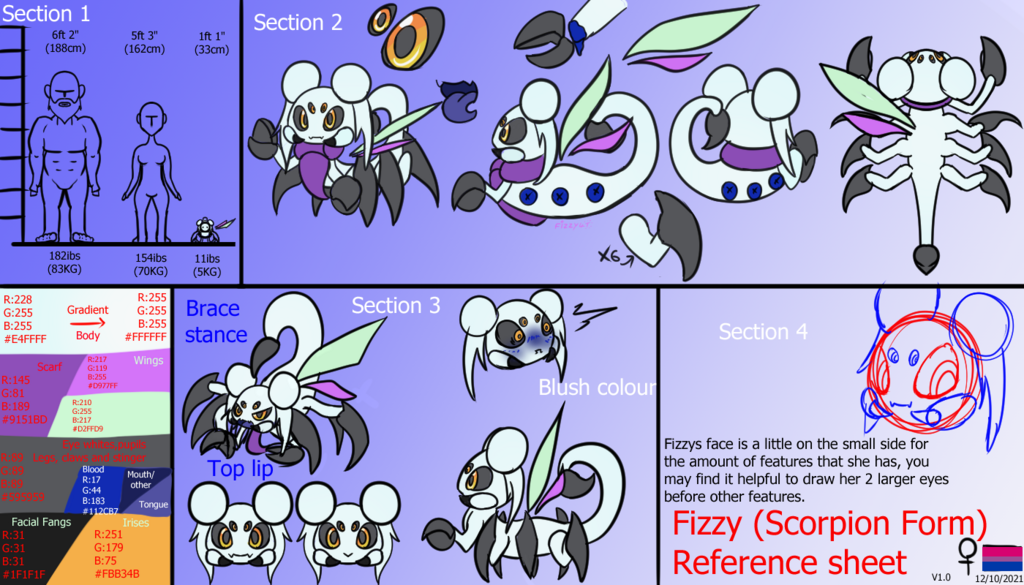 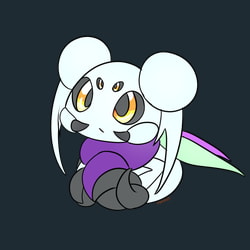 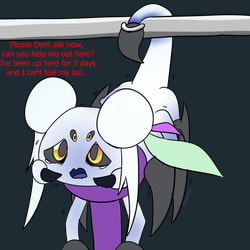 SFW version of Fizzy's reference sheet, should it be needed... Hoping it comes in useful!

Fizzy is my sona, she is a shape-shifting scorpion ghost that can take any form, she pleases.

Fizzy stands at 1ft 1 inch (33cm) and weighs in at about 11 pounds (5KG), The man and woman used alongside the height reference are the appoximate average global heights and wieghts.

Eyes
Fizzy has 4 eyes, two larger ones and two smaller ones. The pupils and whites of her eyes are dark grey in colour, her iris's are honey coloured.

Body
Fizzy's body is a very pale chalk blue and glows passivley, similar to how traditional ghosts look. She likes to wear a purple scarf, however she will take it off in hot weather, or if it starts to get itchy.

Wings
Fizzy's wings are floating spirit essence, they are only ever on one side of her as a pair (eg, the green and purple wing will always be together, you wont find the green on one side and the purple on the other)

Blood
Being a ghost, fizzy has blue blood... litterally, as it runs through her body it makes her mouth and other areas of the like appear blue, a similar thing also happens if she blushes and gets a sudden rush of blood to her head. If she is flustered or otherwise exited she may appear to be bruising, but this is her equivelent of "rosy cheeks".

Brace stance
This is her defence stance, she goes into this stance when she is feeling threatened and will sting you if you get too close. She attempts to make herself look as big and intimidating as possible to try and scare off whatever ruffled her up.

Top Lip
Being a shapeshifter, Fizzy can remove the hardened "fangs" on her top lip and make herself appear less intimidating, she may also do this if she has problems eating something.

Fizzy is a female bisexual, she likes both sides of the team, and isnt fussy in that regard

Additional things not mentioned on sheet

This is version 1.0 of Fizzy's reference sheet