A Glimpse of the Spirit (Art by DarkTownArt) by FeyPhoenix 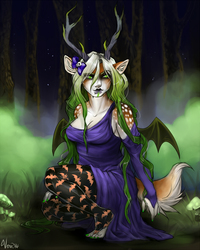 A Glimpse of the Spirit (Art by DarkTownArt)

Whoops, so the accompanying story to this got a little bit out of hand, but I like it. And the holidays infected me, so Analise basically just became like… the basis of a christmas/yule/etc. holiday on Venoma. :B Hope you enjoy! And give DarkTownArt a peek if you can, she does some awesome work. I was happy to be a patron when I could, and will probably be again once I get my finances back in order.

The people of Venoma are familiar with the sight of the nature spirits and elementals. For the most part they do not interact, but the elementals often find their paths crossing with the humans.

In Analise’s case, she finds them much less frequently, unless they are already sick, dying, or dead from poisons or venoms. Because of this, she is a bit cold and standoffish when she encounters them or they her.

Observing quietly from within the forested boundary between the questionable waste of ‘civilization’ and the slowly spoiling grove beyond, she saw a parent and their young child, both filthy and dressed in mere rags, collecting false morels. They were quite poisonous to humans if not cooked properly, and given their malnourished bodies and the mirth at which they gathered them, they were fully intending to ingest.

Analise stood by as the two separated a bit, moving from patch to patch of the wrinkled looking fungi. The child drew near her, gathering from a patch at her feet before realizing she was there. When the child looked up, Analise stared back disinterestedly. The child recoiled, shocked at the discovery of her and her lack of attire. “Nini! Nini! There is a big naked lady over here!” They cried out, the parent running to and cradling them.

The parent stared at Analise a moment before the rush of adrenaline wore off and they were coherent enough to discern what she was. “Ah, forgive us, spirit, if we have caused some offense.” They apologized and an uncomfortable silence hung in the air while she peered at them. “Umm, I’m sorry if these were your mushrooms. My child and I are very hungry, so…”

The child raised their voice to protest, but the parent quickly shushed them and responded, “I understand, spirit. We will leave them in your care as you wish...” The parent choked on their words and tears welled up in their eyes as the prospect of a meal seemed farther away than ever.

“Actually, you do not understand, human.” She bent over and picked up a cap then crouched to get closer to the cowed and cowering pair. “If you eat these, you will die.” She offered the cap to the parent, who took it gingerly, still clutching their child. “You can dry and boil them or boil them multiple times to remove the poisons, but given what I know of humans and your attire, I’m assuming you do not have the means to prepare them properly.” The parent nodded solemnly as tears started down their face.

“I’m so hungry, nini…” The child protested and cried into the parent’s shoulder. Analise grimaced at the child, perhaps uncomfortable around them in these circumstances, but the parent took it to be disgust at their inability to care for the child.

“Don’t worry, my dear, my beautiful child. I’ve been trying my best, but I don’t think we can stay together for much longer.” They both cried in each other’s arms. There was an understanding between them that indicated this topic had come up before.

Analise stood and lowered at them and then turned toward the grove. “Follow me.” She spoke and strode through the trees. The parent carried the child and struggled to keep up, traveling nearly a mile before they came to a font. Analise gestured toward it, barely turning her head to see them in her peripheral. “The water is pure. Drink your fill and then wash up.”

She left them to their own devices, making her way deeper into the grove to gather things for the humans to eat without becoming ill. As she gathered, a timid voice rose from behind a birch tree, “why do you share these gifts with the humans?” Analise turned to look at the deer-centaur woman peeking from behind the safety of the tree’s trunk. Analise huffed and turned back to her task. “Their waste is spoiling our grove, yet you wish to share with them anyway? I don’t understand.”

Analise tried to continue ignoring the other spirit, but the deer-centaur stepped closer and placed her hand on Analise’s shoulder. “You and the others hardly care what I choose to do beyond how much of it you can look down on, so if you don’t mind. Leave.” She stopped, but didn’t bother looking back at the other spirit.

“Dear Kin, do not speak like that, we care deeply for you as we do each other.” The deer-centaur kneeled and attempted to still Analise’s hand, but she smacked it away.

“You are no kin of mine, Satu. You and the rest of my ‘sisters’ made that abundantly clear when I was formed from the Great Venoma.” She stood, cradling the items she gathered for the humans, and scowled at Satu before heading back.

Upon her return, the two humans were exiting the font, looking refreshed and in high spirits. Analise sat cross-legged and put the various herbs, fruits, nuts and vegetables in front of her. “Carefully take these and soak them thoroughly in the font, as well as whatever they come in contact with on your body, and then be on your way.” She told the child, but stopped the parent when they went to join them. “As for you…” She beckoned them close so that she could whisper, but was careful not to contact them, lest she poisoned them worse than the fungi ever could. “Sometimes our duty as caretaker requires us to relinquish that role to another. If you cannot provide, if you cannot protect, it is best to leave the task to someone better suited.” She spoke and the parent nodded. “If it is pride that keeps you from seeking help, swallow it. If it is sentiment, just think of how you’d feel letting someone capable take care of your charge in lieu of the guilt and pain you’d feel when your charge returns to the Great Venoma before maturity.”

The parent nodded, bowing their head. “Thank you, spirit. May I know your name, so that I may offer my prayers to you?”

A final scowl from Analise almost gave them a chuckle. “I’d rather you didn’t. I am called Analise.”

“Very well, great spirit Analise. Your kindness will not be forgotten, either way.” And with that, the two humans finished cleansing the food and left. Analise sat there for a long while, wondering what exactly motivated her to help them. It was uncharacteristic of her, but she felt it was the right thing to do to keep balance. Little did she know that her actions would have such an impact, that the two would start a tradition that they passed on through the generations to family and friends that became a commonly celebrated holiday for most. ‘The Eve of Analise’s Blessing’ it was called. Eventually shortened to ‘Ana’s Blessing’ or ‘Eve of Blessings’, it was a day to create a feast for family, friends, neighbors, and especially the less fortunate. Decorated with ribbons of purple, typically lighter like lavender and Analise’s lips, antlers, and coloration around her eyes, people used twigs to represent antlers as she has.

As the tradition was passed down, many things got distorted from the original, but the purple decor and deer-like representations of Analise were a constant, as was the idea of giving gifts and a feast.