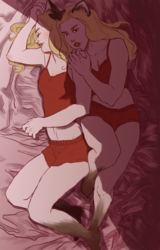 Tobias — the scholar, the alchemist, father to both Carmyne and Ava. He's a real gentleman figure who can usually be found holed up in his study surrounded by scrolls and books, hiding away from the real world in history and magical theory. He caused a huge stir in the community when he not only married a woman who was much younger than him, but also completely human. Despite his reserved nature these days, he was very rebellious and outspoken in his youth, a trait that has passed on to his daughter — much to his dismay because he's so tired and they won't stop. Much of the time he's hiding from them in his study, or he's actively trying to drag them out of trouble. Lilah, his wife and the twin's mother, thinks it's hilarious.