I Liked That Shirt... by Dragonien 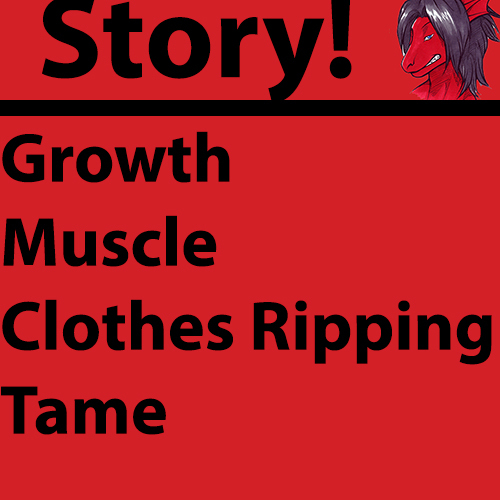 A soft grunt escaped the fox's lips, filling the air of the otherwise silent apartment he stood in. his body let out another involuntary shudder, sending him stumbling a step backwards. A broad handpaw gripped at the edge of one of his chairs for support to keep himself upright as he felt that shuddering cramp jolt through every muscle group across his body.

A third, more powerful one rippled through him, causing his fingers to clench and abruptly smash right through the solid stained wood of his chair, splintering it into debris that fell down around his feet. His heartbeat pounded through his chest a mile a minute, his lungs pulsating with deep throated gasps for air. His body felt like it was burning up, a thick sheen of sweat washing across him and dampening his fur.

His chest heaved against his shirt, stretching it out to the brim and then some. Each panicked, labored breath pushing out a bit further than the last. Further and further the taunt blue fabric stretched until finally he heard it. The faint, quiet 'riiiip' of strands of fabric splitting apart. Each inhalation flaring out his chest, and snapping a few more of them apart. A small V shaped tear beginning to form around his collar.

Another involuntary shudder shot through his body as abruptly one of his arms jerked, fingers closing into a fist and slamming down on his desk out of reflex. A loud chorus of shredding fabric filling the air as his biceps suddenly surged thicker, ballooning to near half again their previous size. The sleeves of his shirt were simple unable to contain the new, rapidly expanding girth of the fox's arms and split apart around them. His shirt, now more of a muscle shirt than T shirt, was not going to last much longer at this rate.

His pants were faring no better as the hefty girth of his thighs slowly thickened and swelled along with the rest of him. What before had been loose fitting cargo shorts were now pulled tight around his plump calves. Each second brought more and more girth too them as they filled out the tan shorts to the bring. Seams beginning to split apart and tearing down the sides of his legs to release some of the pressure. The expanding tree trunks that were his legs demanded more breathing room and his shorts were in no position to argue.

His pectoral had ballooned into thick, dinner plate sized steaks of meat, his abs had split into the beginnings of a near impossible washboard 8 pac, while his biceps now nearly rivaled the size of his own head. And probably thickest of all were his new legs, each one nearly as plump around as a telephone pole. So thick and bloated with raw, steely muscle that they ground together even when relaxed, desperately fighting each other for more space.

“Fuck” he huffed softly, still panting a bit to try to catch his breath as the 'hot flash' of his sudden growth spurt began to fade. The fox stood there, in the half torn tatters of his clothes, having gained a good 50 pounds of muscle at least, swollen well into professional bodybuilder sizes now.

“I liked those clothes.”

I Liked That Shirt...

just some simple, quick growing out of clothes