Hi, Im Dominoms, but you may call me ALI.

I came here from a few other recognizable art sites, such as DeviantART, FurAffinity, SheezyArt, and TLKFAA.

Why not follow me at these places, too? v 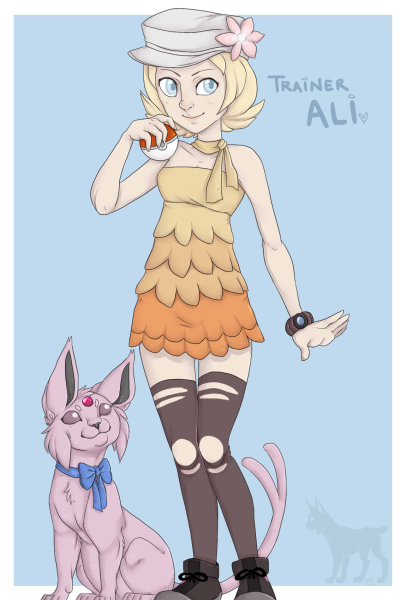 WARNING - JUST A HEADS UP

Hey everyone, just got some information I thought you all should be aware of.

A friend informed me just now, that there is an Artist Beware page about me, on Facebook. However, it is NOT a legit "beware" at all, but rather a petty complaint from a friend of an ex-friend I know irl.

See, true Artist Bewares are supposed to call out consistent flaws in an artist, or their work... but THIS particular AB page only made false accusations and negative statements about me, as a person.

This person chose to remain Anonymous, and they're REALLY lucky I don't remember their name, or I'd be plastering it all over my Wall of Shame, right now.

Anyway, they complained about a few separate, spaced-out incidents, that occurred between said irl ex-friend and I, but they crammed everything together to make it seem like I did everything right after the next. First, they cried about how I was upset not to have photos taken at Otakon... TWO YEARS AGO. Which, was true at the time, but Im way over that by now. I know Im an amateur, and that's fine. I simply didn't know any better, as that was literally my first time attending any convention.

Second, they cried about an anime-hate rant. This did happen, but the thing is, everything I wrote was merely a personal opinion, and NOT meant to be aimed at anyone specific. Yet, she took it to heart, as if I directly threatened her, and then she told a bunch of other friends, and had them all come and attack me for it, via private message. I received a slew of hate messages and nasty insults from them, basically all telling me how terrible of a person I was. For having an /opinion/... I don't care if you obsess over anime or not. Point is, I used to be that way once, but I grew out of that phase, and now I simply can't associate with "otakus" anymore. That's all.

This rant though, is EXACTLY the reason why they stopped talking to me, though, so the mention of this, is really what gave away who was behind all of this libel.

Lastly, they cried about me getting back into cosplaying, and building a fursuit. They stated beforehand, that I should use the good cosplayers as encouragement to be better, instead of cry about it. And well, I DID??? So yeah... and the fursuit bit comes from the fact that said ex-friend originally wanted to build fursuits for both of us... once again, 2 YEARS AGO. However, after waiting nearly another year, no progress started on either of them yet, and I was beginning to get impatient. She traded me a free fursuit, for a free reference sheet for her fursona (...which I'd usually charge about $60 for), which I COMPLETED MY HALF OF THE BARGAIN. She did not. In fact, I even offered to re-draw her reference for free, after that. But still no fursuit... and I had the feeling she was never going to begin working on it, so I took the initiative to start on one, myself. THIS, in my opinion is what deserves to get an AB page set up. An unfair and incomplete trade!

Also, the poster claimed she met me at a convention. No. That's a lie. She "met" me on Facebook, and knew next to nothing about me, up until I posted that rant, which is where she randomly exploded at me and began tossing insults at me.

OH, I almost forgot to also mention, that this poster shared links to my DeviantART, FurAffinity, Weasyl, AND personal Facebook page, in a beligerant attempt to sabotage me and my art business. However, I'd like to make it known, that sharing my FB link publicly, is a violation of privacy, and if it isn't removed, I WILL call the police on her for harassment, libel, AND public humiliation.

SO DO NOT BELIEVE THE AB, GUYS

ITS ONLY A PERSONAL IRL ISSUE BEING RE-STATED 2 YEARS LATER, BY SOMEONE WHO JUST CANNOT LET GO.

ps. my birthday is tomorrow and this was not the best first thing to wake up to, so Im really LIVID right now

.You may request work to have a simple, or transparent background, at no extra charge,

*HOWEVER, to purchase a work with a painted background, the price may be upped by $10 - $20, depending on complexity.

.Headshots are typically half the price of full-bodies.

.There will be a $5 increase per character requested.

Simple Refs include a basic template, with only a few panels of character info, and 3 views of character (face, right, and left sides).

Complex Refs include a thoughtful template, with multiple panels of character info, and 5 views of character (face, front, back, right, and left sides).