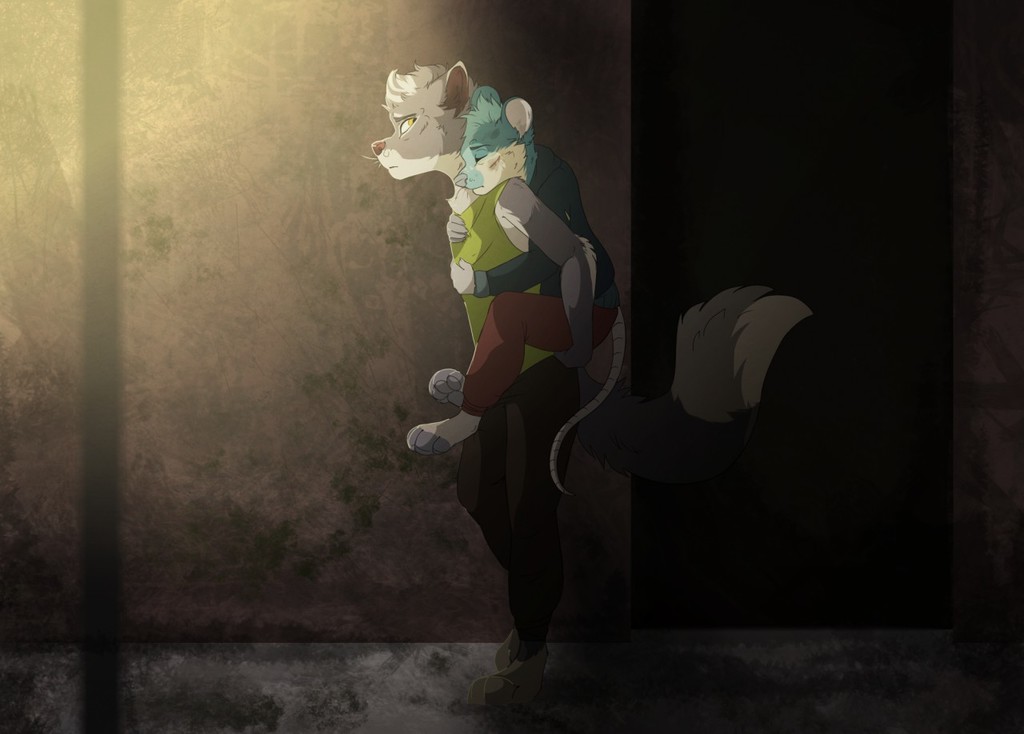 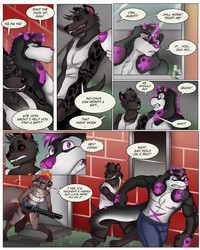 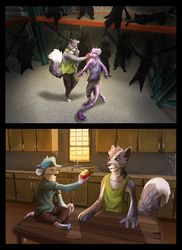 A bar filled with anthromorphics. Large, small, laughing, shouting and fighting. In a distance a squirrel watches from a table exhausted look upon his face. yawning from working long hours in various jobs, Leaning his head against his wrist watching it all happen in front of him. “Yo! Tonto You listening? Im tellin ya, this could help us big!” An otter in ragged dirty clothing sits across from the tired squirrel explaining an idea, but only seems to only fall on deaf ears “Yeah. Not interested...” the squirrel flatly refused the otter’s request.

Scratching his head, the otter shows slight irritation from his quick reply. “Aggh! Why are you always hard to get through?” but presses forward persuading him. collecting his composure, He slides a sheet of paper with an address on it. “It might even help you keep that little spot you got in human territory.” The squirrel glances at the paper for a moment and thought on it, and returns looking at the patrons. “Pan. I told you before, I don’t fight unless it’s necessary…” The otter stands up walking out in a grumpish manner scratching his head, he speaks to the squirrel one more time in hopes that he listens.” Look...Think on it for a bit, lots of money can be made on this if we partner up.”

"And I told you don't call me that, it's Lucien." The otter walks out the bar, Leaving the fatigue squirrel to his thoughts. His eyes gaze the sheet of paper once again, he remembers what Lucien mentioned maybe this could be something…his paw reaches but hesitates to grab. doubt in his mind he stands up crumbles the paper, but ceasing himself from tossing it on the floor he places it in his pocket and leaves the rowdy bar.

The sky was dark, the night is breezy. Tonto enjoyed the winds that brushed against his fur as tired as he was it felt somewhat relaxing to end on a long day such as this. His pocket begins to vibrate on and off, his paw reaches in picking up a phone to see who was calling. the name luna appeared on the I.D. tonto stared and sighed at the sight of the name, dismissing the call placing it on silent.

Placing it back in his pocket, he noticed something. the street lights flickering, some on and out but it didn't bother him much, walking forward in a darker area Tonto tripped on something. Paws to the floor,he let a swear slip out under his breath. "Shit" a street light flickers on and revealed what the squirrel tripped on. he froze a Moment ,A rat curled up on the dirty side walk. Tonto goes closer, checking his condition the little rodent had cuts on him, clothes and face dirty, torn as if he's been in a fight. "He..hey kid..you okay?" the squirrel asked,but no response..the cubs eyes were open but it was as if he was in a state of trance.

This moment, brought him back to a memory he wished never had.for a second the squirrel saw someone in place of the young cub. He started to feel remorse from This, snapping back to his senses tonto knew he couldn't dwell on this especially since theres a kid in need of attention. "Alright..hang on kid ." tonto places the young rodent on his back, a bit troublesome at first being as unresponsive as he was,by surprise the young rat wrapped his arms around tonto's chest, clinching firmly,his hands shook and eyes began to close. The squirrel could only look back and ask himself. "What happen to you?" concerned,saddened he carries the rat to his home. He could only think who knows how long he's been out here, no kid deserves this life hardship. There wasn't much the squirrel could even give him at the moment but maybe.. This home could be a start .

Anywho to those read hope it's tasteful..

Artist to this lovely piece. http://www.furaffinity.net/user/justinefox/