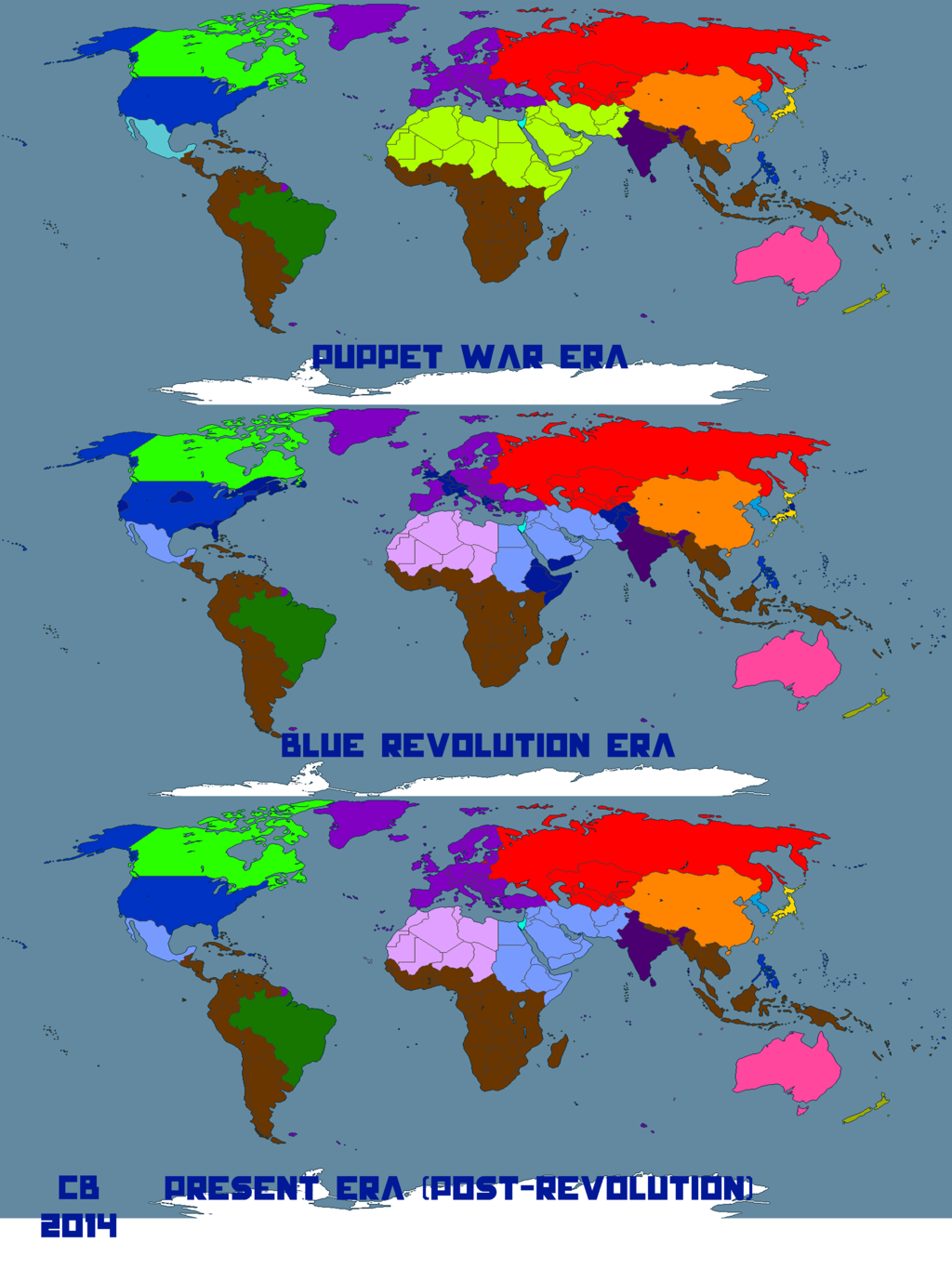 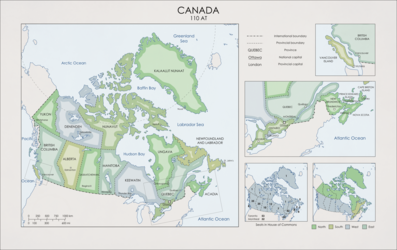 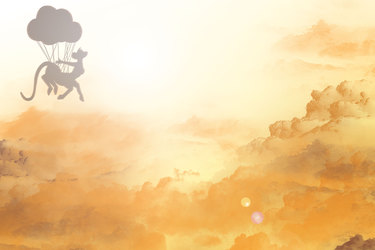 The main hyperpower is US-Land (dark blue) and its allies (Europe, light purple; and the various countries of the Anglosphere: Canada, green; Australia, pink; New Zealand, light brown; India, dark purple). Other power blocs are Russia and its sphere (red); China (orange); Korea (blue); Japan (orange); and Brazil (dark green). The main battlefields through which the Ami robotic infantry and flocks of drones went through were the Middle East and North Africa (yellow-green). Mexico (light blue) made some spectacularly poor geopolitical maneuvers and also ended up as an American Protectorate. Unaligned countries are dark brown, of which sub-Saharan Africa is undergoing a number of changes, from the stable and rising East African Federation to brand-new nations based on old cultures, such as the Zulu Nation and Mandinkaland.

The Puppet War was sparked by a WMD terrorist attack on American soil. After taking a couple of years to improve internal counter-intelligence and shift the economy to a war footing, an attack launched from Pakistan into India was used as the justification to launch the 'Puppet Soldiers' (remote-piloted infantry robots) and 'Pigeons' (20-lb helicoptor drones which could blow themselves up at any target, and were deployed in 'Flocks' of 10-50,000). Once these weapons started moving westwards out of India, they basically kept on going, mowing down anyone who shot back. Even without the use of any WMDs on either side, some areas were nearly depopulated; when some settlements started hanging would-be guerrillas and putting up 'we surrender' signs, the fighting finally started to ease.

Meanwhile, in order to reduce the logistical tail of the robotic military forces, the old idea of satellites that gather solar power and beam it down as microwaves is revived. Mines are opened on the moon, launching material from its shallow gravity well to orbital factories.

US-Land has only claimed the Middle East and half of northern Africa as Protectorates (light blue) in addition to Mexico; the western half of north Africa is essentially a European Protectorate. The very dark blue areas are where the Blueist revolutionaries were able to completely replace traditional government functions (eg, crowdsourcing policy proposals, prediction markets to estimate the results of those proposals, liquid democracy to determine which results the population actually wanted, an ad-hoc currency based on cell phone minutes, etc).

Due to the advances in robotic technology from the Puppet War, especially when robots could match human capability for a cost lower than minimum wage, an enormous number of people lost their jobs due to automation. The official trigger for the Blue Revolution was when the military robots were brought back from overseas to suppress protests. The Blues are a hodge-podge of diverse interests, such as labour unions, communists, cypherpunks, anti-corporatists, environmentalists, and so on - basically, every group that's been dissatisfied with their government but has been unable to change policy in any way disliked by the wealthy oligarchs and plutocrats.

This map is shortly before Greenland secedes from Denmark and joins Canada in 110 AT.

By now, the various traditional national governments have been able to infiltrate, subvert, and sabotage the Blues' systems, causing their would-be replacement governments to collapse, allowing for an easy resumption of control by the standard powers-that-be. In the more peaceful regions, many Blueist movements shift their efforts from revolution to forming political parties to try to change the system from within, with greater or lesser success. (For example, in Canada, a settlement was reached which included several Blueist demands, such as a Basic Income Guarantee.) While still shaky, the peace seems solid enough to be likely to last for years to come, or maybe even decades. The Blues no longer run any states anywhere on Earth...

... meanwhile, off Earth, the orbital habitats who style themselves as 'New Attica' continue to exert their independence from any Earthly control.