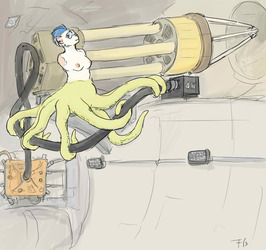 Both of Dee's parents believed in astrology. So much so, in fact, that they worked out what would be the most auspicious natal horoscopes that would be feasible for their offspring, and then worked to arrange to have their children born at those times. Including arranging to (safely) induce Dee's birth when she showed no sign of arriving on schedule.

Dee was conceived and birthed with a horoscope that, supposedly, would give her the maximum intelligence: with Mercury lining up with both the Sun and Moon, with as many planets as possible in Gemini, and as many others as possible in the other air signs. (And, importing a foreign magical system, for her to be born during the Hour of the Rat.)

Dee's parents were also practical numerologists, and since her last name was already fixed, chose to maximize the number '4' in her name by dubbing her: Deanna DiDi Dee.

Dee, of course, believes that the whole thing was bollocks, and credits her high intelligence to less supernatural causes, such as good nutrition, plenty of freeform study, and moving away from her parents while she was in her teens.

(In case you're wondering, Lavosier 20 corresponds with June 13.)