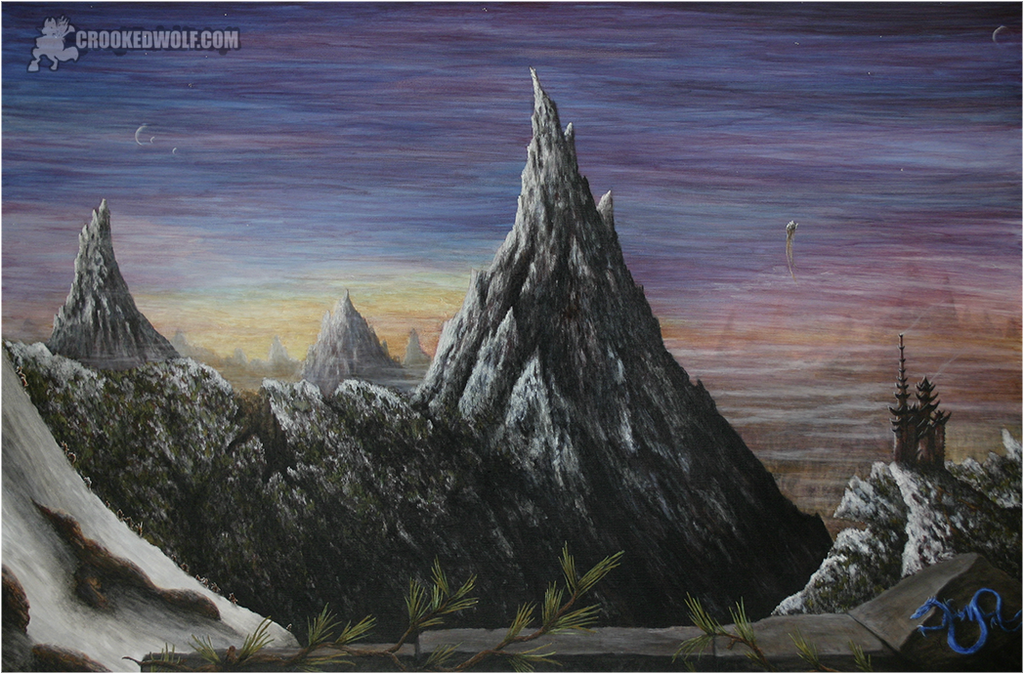 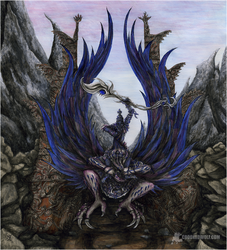 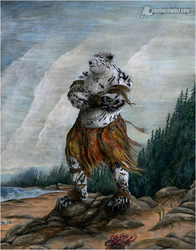 Here Kyllikki Oskari and Goran, along with some fellow demon hunters, are about to board an armored zeppelin that will take them even further north beyond all friendly civilization. Kyllikki had traveled to Briga Dun a few days earlier with Oskari and they convinced Goran to aid in finding the remains of Kyllikki's mate and bring peace to his disturbed spirit. Goran carries in him a spirit of war that is always attempting to control his actions and thoughts so his motives for helping Kyllikki and Oskari are twofold. It's risky for Kyllikki and Oskari to enlist the help of a possessed fighter but they need his supernatural toughness and power to be able to travel through the demon's realm with minimal numbers and still stand a fighting chance.

These three mountains are a widely recognized boundary marker between the demon tribes to the north and the kingdoms to the south. The little blue lizard is a common bug-eating creature that lives all over the north (in Eternalfold there are lots of active bugs and lizards in even the coldest of places). Cool thing about them is their blood and grease is a natural anti-freeze. The castle on the right is Briga Dun, the current home base for the demon hunting guild that took over the responsibilities of Goran's old guild (http://keefengrind.deviantart.com/gallery/#/d30io5t) after they were destroyed in a doomed expedition. Legend has it that the demons somehow conjured an earthquake to break the world's back and it was the strength of Briga Dun that stopped the shockwave in its tracks and held the mountains together, leaving the castle perched upon that jutting piece of rock and a gigantic canyon below. Ever since it has become a symbol of resistance against the horrors that emerge from the distant rocky north. In truth though nobody knows who built it or why it sits on that particular outcropping. The floating jellyfish looking thing is a gigantic armored zeppelin that is the common vehicle for long range travel over the mountains. In Eternalfold jellyfish float through the air as well as water in humid regions. Dragons find them poisonous and usually avoid disturbing them so by shaping the zeppelin like a jelly it typically keeps hungry dragons from targeting the airship. The center mountain is about 63,000 feet in height and the other two are both over 80,000 feet but these heights are small compared to the monster rock formations further into the demon's realm that can measure hundreds of thousands of feet in height. In this world there is no outer space; it's a geocentric universe where the sky goes up forever and you can dig down into rock forever while the land is a kind of table with no edges. On the slope to the left are a group of demon hunters heading up to an unseen docking tower for the jellyfish zeppelin, about to embark on an epicly dangerous quest that I will paint later. About the middle of the slope is a whiter figure that's Goran and the last two figures in that center clump of warriors are Kyllikki and Oskari (he's the one with the long whiteish spear poking straight up and Kyllikki's 6 foot longbow can be seen across her back to the left of him).