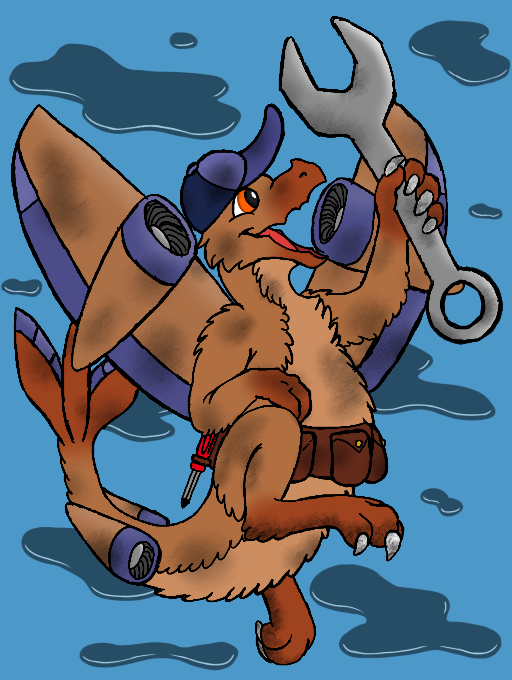 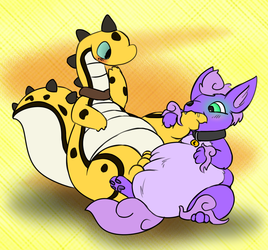 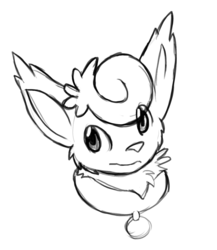 Spanner the Repair Planedragon! - by Rijolt & Me

A lot of you know by now that I can be quite the capable planedragon! I have my own airlines, Shadoxian Airlines, tied to me after all, and take quite a few commercial flights which generate a lot of income for the airline. I'm also a jumbo-jet, so I can hold a lot of passengers in my behemoth frame~

But as you might have guessed, a planedragon can't run an airline all by himself! I have many staff under me to manage passengers and luggage and all sorts of things. But I am the only planedragon my airlines have...for commercial flights, anyways. But there is another planedragon on staff...and he plays a very important role~

Meet Spanner, the planedragon mechanic! He's very small for a planedragon, only standing about as tall as a human being, so he's (mostly) incapable of being a passenger plane. That being said, he plays a HUGE role for his small size. Since I AM the only commercial plane in my airline...well, as big and strong as I am, I still need to take breaks and have some repairs now and then! Fortunately, every time I return to my home airport, I've got a cozy hanger to settle down in for a half-week or so, and the little Spanner to attend to me~

He lives in the hanger itself, keeping it always ready for my stays, and himself always eager and energetic to don his tool-belt and clamber all over my massive frame - both inside and out! - to make sure I'm not suffering any wear and tear. And if I am...well, he REALLY knows his mechanical skills, and can fix nearly any issue with his impressive array of tools. Even if I'm not in need of repair, he's a great conversationalist and friend, keeping me from feeling lonely when I'm on break from my job. ^^ With his chipper British voice (his name alone should spoil his nationality ;3) and his almost-birdlike and rather-adorable squawks he makes from time to time, it's hard not to smile while talking to him.

Spanner's certainly not afraid to get dirty in the process of doing an excellent repair job, as is obvious from the many dirts, oils and greases that stick to his fluffy fur by the end of even a routine maintenance. But don't take that to mean he's a slob; he actually takes good care of himself, always making sure to shower up all clean after a hard day's maintenance in his little 'apartment' that's in the back of my hanger.

That being said, a solo shower isn't the only way he enjoys getting clean... The silly little planedragon has some interests all his own, including a love of getting a bath from someone else. He loves any interactions with those big, strong footpaws of his, too; including those pawsies being licked clean, if he finds somebody willing to do so... He'll blush like a madman and squawk out a squeak, but you can bet he RELISHES the attention~

But can you blame Spanner? He spends all day cleaning up the hanger and maintaining me...so it makes sense he enjoys getting a little decadence and maintenance himself from another party once he's off-work. <3 Even a hard physical worker like him deserves a little doting~

I figured it was about time I showcased this cutie, with all the planedragon stuff I revealed. ^_^ While I make for a pretty cute planedragon, it's still 'just' an alternate form of my base self, obviously. So I felt inspired a while back to bring about a 'full' planedragon - a fella that is, was, and always will be one. My friend   rijolt was quite interested in this, and actually helped me bring Spanner about - even having an adorable RP with the cutie and discovering his interests. She really helped shape who he was...and then shaped him more literally by drawing this absolutely-adorable image. <3 Just try not smiling while looking at this cheery fellow!

I colored the image myself afterward...and decided, as I was learning Spanner's personality, that I wanted to make three versions. You can see the other two versions as links at the top of this description. Spanner's favorite is probably the 'dirty feets version', as he thinks it makes his feet look very lickable. ;3 Though he'll never say that out loud...so I did. Hehehe~

Part of Spanner's creation was inspired by a simple thing I noticed: for all the people who were creating planedragons on Twitter and FA, and for all the sorts and sizes they were, nobody was considering how their planedragon would be maintained. And after remembering that there are indeed planes meant to maintain other planes (such as mid-air refueling planes), I decided it would be a great idea to create a maintenance planedragon.

There's even a double-meaning to pairing Spanner up with me, beyond just the fact that it makes sense that he would repair me...I'm a gigantic dragon, and he's a tiny dragon... In fact, you may notice Spanner size and appearance almost looks...kobold-like, you could say? A lot of classic RPG lore states that kobolds worship dragons, and tend to be in the service of such large beasts when they can be. Sounds a bit familiar, now doesn't it? ^^

Also yes, he's British. For the unaware, 'spanner' is the British term for 'wrench' as we call it in America...which is what he holds, and often uses! The British decision was heavily due to a few Brits I know whom I greatly respect and admire, and since I DO adore a British accent...well, Spanner just had to be. <3

One more funny fact: I do love paw-play much like Spanner, but I don't share his interest in dirty-feet-stuff. That's an interest that's all his own. ;3 Though I think it's silly and cute, that he's 'unique' from me in that regard, and I fully support people licking his feet clean if they want to~

There will be another Spanner-art eventually...once I color it~ ^^ I may get more for him later... Do tell me what you think of him; I'm curious what reception he'll get from you all. :3