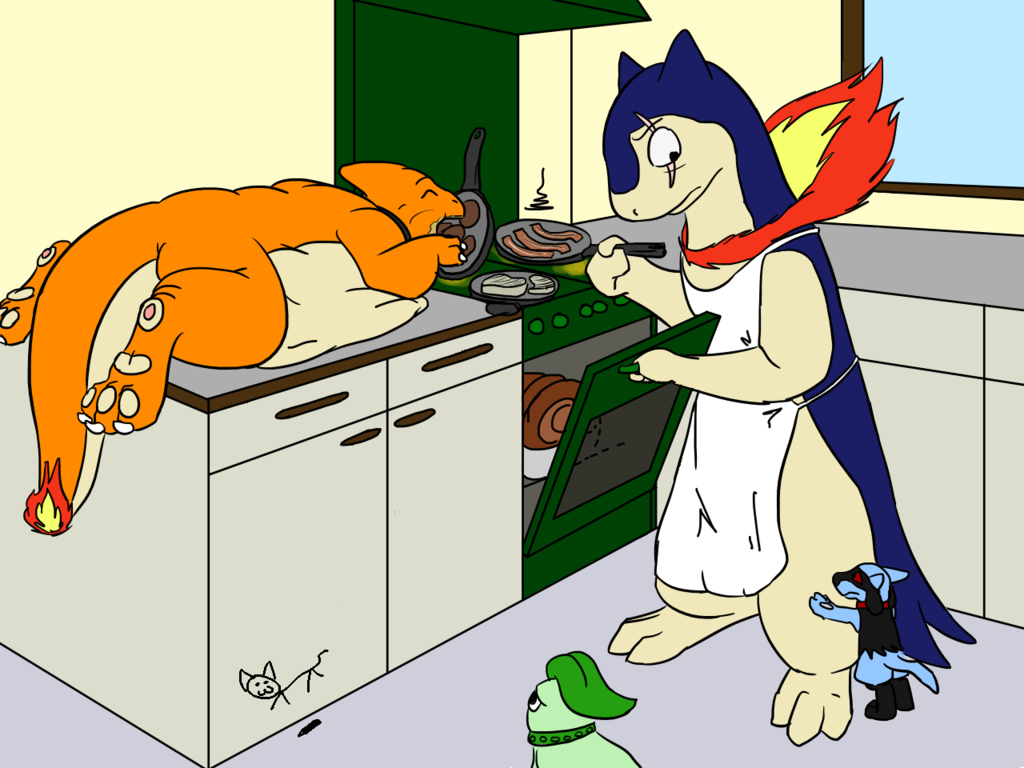 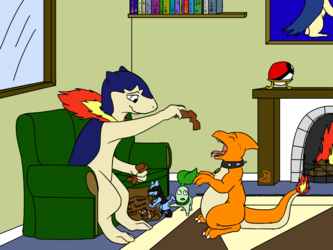 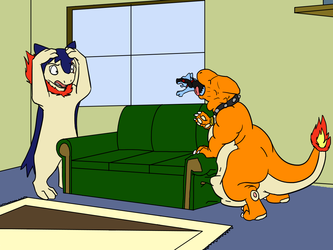 The Charmeleon sat off to one side of the kitchen as Night got out some bacon from the refrigerator. The lizard observed the fridge was well-stocked, and began to hatch a plan.

"Well, strips of bacon aren't too different from strips of jerky, right?" reasoned Night to his pets as he got a pan heated on the stove, slipping a nearby apron over his body. He didn't have to worry about getting burned, being a fire-type, but cooking grease did no favors for his soft fur.

Rolly seemed more than eager about the meal his master was preparing, but Chica's focus was divided. She had her eye on the Charmeleon, who had followed them into the kitchen with an even hungrier look on his eyes than before. How was that lizard not full by now?

The cooking began in earnest, with half the pack of bacon being added to the large pan by the Typhlosion. It sizzled and made a greasy, tasty smell waft into the air as Night shuffled and flipped the bacon strips, licking his lips to the meal as it was soon nearly cooked. But...so focused was he on cooking that he did not notice Charem climbing up the side of the nearly counter, until the Charmeleon had settled down atop the space and suddenly invaded his snout over the stove.

"U-uh..." Night stammered out, taken aback a bit as the firelizard shoved the meat into his mouth with his paws, the burning-hot meat's temperatures hardly a concern for the fire-type pet as well. "You...are still hungry, Charem?"

Charem looked at the Typhlosion wantingly. "Rowr! Rowwwwwr!" exclaimed the Charmeleon, glancing between the fridge and Night.

"You want me to cook more food? Well...I...guess I did just restock recently... I guess I could cook up a number of things... Then I could save the leftovers, and not have to worry about cooking for a while. Yes, I suppose that would work..."

The Charmeleon panted happier at that, but watched intently as Night brought out a roast and placed it into the oven. Still, the Charmeleon stared over to the fridge, prompting the Typhlosion to return to it and bring out some hamburger meat. And chicken. And some more bacon...

After a good deal of time, ALL the burners of the stove were active, the kitchen quite hot indeed from all the myriad of active pans cooking away at various delicious meats...certainly enough to feed several people for a week! It was then, as Night juggled and flipped and tended to all these items of food, that he realized that the Charmeleon might have been eating a bit too much...

As each item finished cooking, the observant lizard learned over and chomped away at each pan's contents, even lapping up all the hot grease present in the containers. The fatty diet added quickly to Charem's previous weight, his belly soon smooshing out from under him.

The counter-top soon had trouble fitting all his girth onto it, forcing the Charmeleon to vacate back to the floor...but it was just as well; all the stovetop meals were gone, the pans cleaned, and their contents all packed away in his fat gut. The roast had finally finished as well, and the firelizard simply bumped Night out of the way, opening the oven himself and essentially climbing in to munch away at the roast within it.

The bewildered Typhlosion simply took off his apron, shaking his head for a moment as he stared at all the licked-spotless pans. "At least he...cleans his plates, I guess..."

This is a 7-part series drawn by   imperfectflame, starring   ottahdragun's Night the Typhlosion and me. :3 (As well as a guest appearance by my Master   Guan.)

This series was inspired by   meanybeany's interesting style of vore/fattening art, where the feeding creatures gain not only fat and girth, but also overall size - eventually becoming a macro and beyond. I always wanted to try that sort of growth with myself, and so this series is the result of that. <3