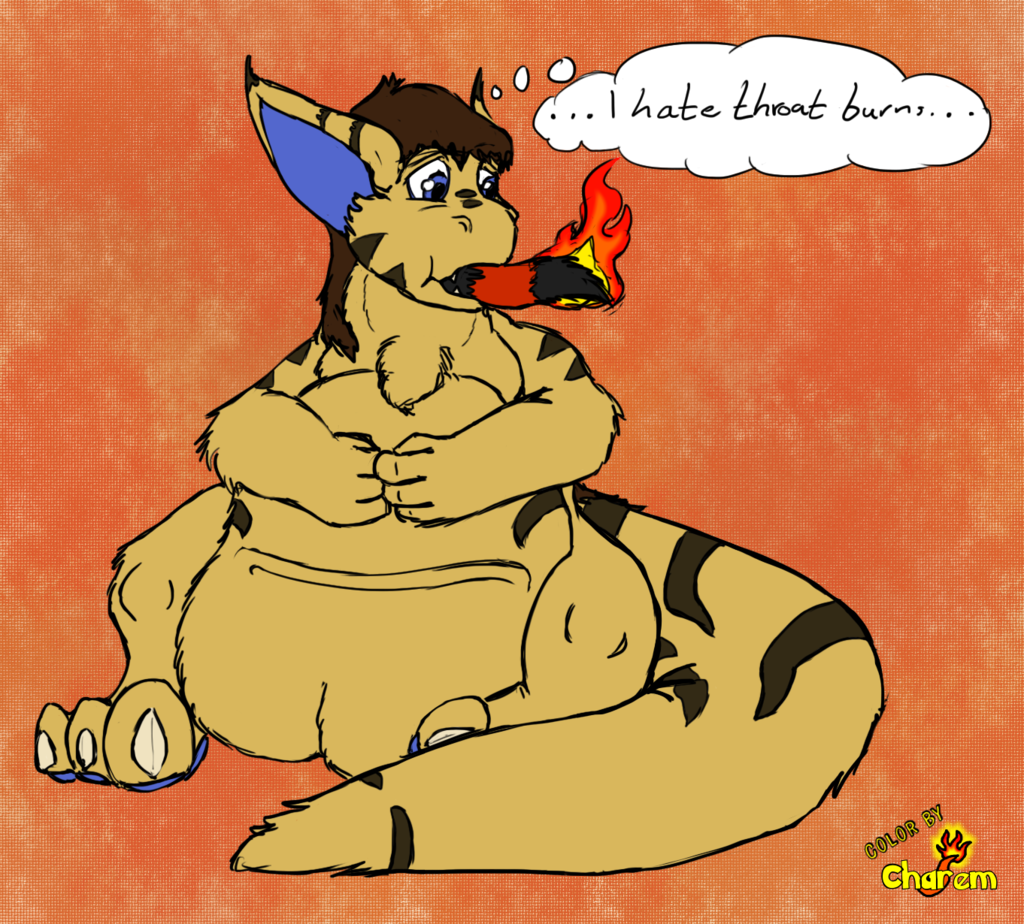 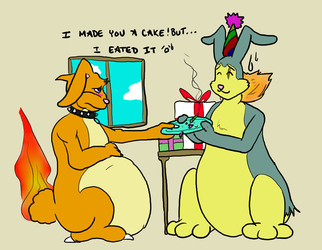 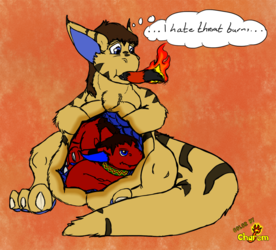 Zat the desert igwulf was quite the laid-back sort, as many igwulves tended to be. He also loved to cook and eat, perhaps moreso than many of his species, if his larger gut said anything!

He wasn't entirely lazy though, and enjoyed a good exploration, having much curiosity about the world. Zat knew to bring a large amount of supplies for his expeditions, of course, especially those that involved travelling around the arid environment he grew up in. And he generally hired a fellow igwulf to go out with him, as it is always better to avoid travelling alone.

That said, sometimes you can never plan just how long your travels might take you... One particular trek through a massive canyon had taken a grievous toll on Zat's supplies, as well as the supplies of his igwulfeon companion for this journey, Charem. Water was thankfully still in good supply, due to the occasional spring to refill at, but food was simply scarce. There were barely any animals native to the area, and those that were were simply too much energy to catch, for too little the nutritional payoff.

Zat didn't like going hungry very much, though. Two days of his stomach growling, and normally-peaceful igwulf was getting quite fed up with the lack of feeding. So much so that his igwulfeon friend, also quite fat and plump, was beginning to look very appetizing indeed...

Travelling in point, Charem had no time to react as his companion suddenly grabbed him from behind, the tan-colored wulf opening his drool-coated jaws and STUFFING the igwulfeon's head right inside! The redder iggy strugged, but the positioning left him at a disadvantage. GULP, GLURK, GULP... Methodically did Zat swallow his companion further and further into his wanting gullet, his stomach only rumbling louder as the meal began to push into it. "FEED ME! MOOOORE" it seemed to be saying!

It didn't take long for Zat to fulfill his body's wish. Grabbing the igwulfeon's feet, he simply SHOVED the igwulfeon deep inside in one strong push! Panting, his belly filling out heavily, the tan wulf collapsed onto the ground, licking idly at the tail sticking from his snout - the last remnant of his companion still outside.

'I hate throat burns...' thought the stuffed igwulf idly as he delicately swallowed down the flaming tail of his meal's. Spicy food usually didn't agree with him, but as hungry as he was, the igwulfeon tasted HEAVENLY...!

Inside the fatty's gut, Charem groaned and curled up in the cramped confines, squinting drool out of his eyes as he looked around the dimly-visible belly. "This wasn't the 'duty' I signed up for..." he grumbled to himself.

Yee! ^..^ This was a collaboration between me and   talrion a looooooong time ago! Tal did all the lines, and I colored and came up with a fun background. :3 Tal, I'm SO sorry it took me this long to post up what I'd done. ^^; I've had this finished for a long while but ended up sitting on posting it.

Zat the igwulf is Tal's own igwulf, while Charem the igwulfeon is obviously mine. ^^ When Talrion came up with his own igwulf character, I suggested a collaboration between us involving our two iggys interacting. Of course 'interacting' quickly turns to 'voring' for people like me... XD

Igwulves were invented by   emusal, and are totally frigging awesome creatures that everyone should have. <3

This is the external-view version of the picture; see here for the internal: http://www.furaffinity.net/view/8844027/