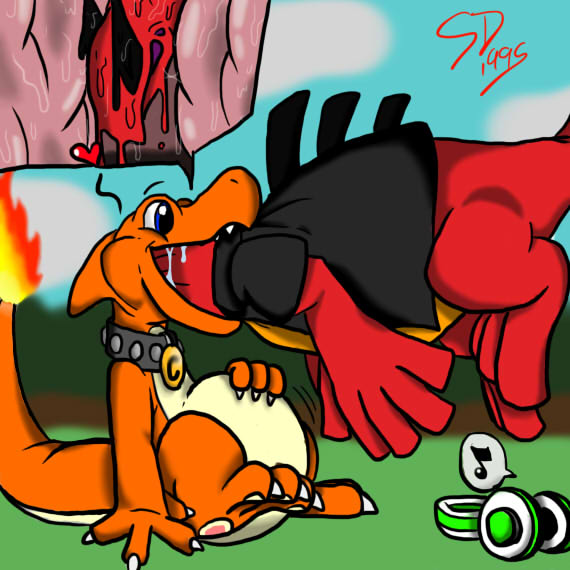 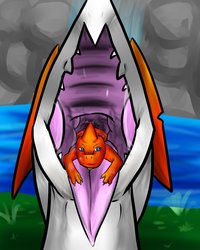 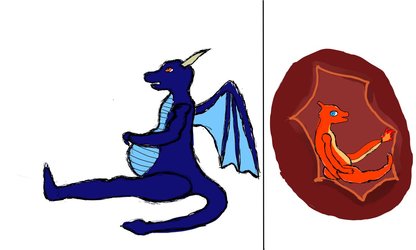 It seems that Lugias can come in many different shapes and sizes...and compositions too! Drax is quite an interesting fellow, having been turned into a latex dragon thanks to a Lugia friend of his. Then, that same friend granted him the ability to gooily shapeshift. And naturally he would honor this friend of his by sometimes shifting into a Lugia form of his own!

Latex creatures can be quite dangerous to those avoiding vorish encounters. They're naturally quite stretchy, and tend to have some unusual ways to digest or even merge with their prey. However, there's certainly ways to nullify this threat... Especially if one has a taste for shiny creatures. ;3

I stalked Draxgia for a good ten minutes from the bushes, waiting for the squeaky Lugia to let his guard down... Then, I pounced! It was quite easy for a vore-trained Charmeleon such as myself to grab his shoulders and glomp over his whole head! He struggled - naturally - but I simply sat down and raised my head up, lifting his body off the ground. Another useful thing to know is that latex creatures, while not weightless, are significantly-lighter than their flesh-and-blood counterparts!

I held the position as he roared and kicked into the air, his form squeaking as he moved about. I focused and allowed my fire to blaze hotter, my internal temperatures rising to great heights... This was not something I did under normal circumstances when eating other creatures, as this would burn most of them to a crisp, and I wasn't nearly violent enough to want to do that. But for a latex creature like Drax, it would have a different effect... I purred as I felt his face being to melt, hot globs of latex sliding deeper into my throat. The latex Lugia's struggles weakened as this happened, and I swallowed him deeper and deeper, causing more and more of his form to soften, then melt... He only became easier to consume as I continued, his form breaking further and further down into mere goo.

Drax wasn't truly harmed though; sentient rubber-creatures thankfully don't perish when melted, nor do they feel pain. They're simply broken down into a less-stable form, and become, essentially, helpless until they can reform. Still, I could feel Draxgia resist pointlessly, the globs of gooey rubber jiggling about under their own will. I simply enjoyed the extra movement, as I grabbed Drax's feet and shoved him MUCH deeper. My throat bulged out greatly for a good few minutes, my greedy hunger not being patient enough to wait for his form to melt before I pushed it in; but inevitably, the bulge in my gullet shrunk, as he turned to goo and dripped down into my belly with the rest of him. The only real 'resistance' I faced was Drax's shirt, but even this melted away as it was surrounded by the boiling hot goo.

"Glurp...gulp...guuulp...!" Drax's toes wriggled slightly as I pulled them into my grinning maw and swallowed them heartily down, the end of his tail being pulled right along with them. I lazed back as the remainder of Draxgia melted away into my belly, feeling his gooey new state collecting entirely within. As he pooled together, Drax seemed to regain some of his strength, and the hot liquid latex soon poked and prodded against my stomach walls. My large belly was perfectly rounded by the meal, but this roundness was broken by the gooey bulges the melted Draxgia caused, the movements also wobbling my gut around quite dramatically. I simply laid back and purred contentedly, kneading my toes into the soft grass below me. It felt like I had just eaten a ton of hot, living jello!

I urp'ed a rubber-flavored burp, licking my lips of the last few bits of Drax's melted body. It seemed that, from now on, goo-creatures would be gaining a new section on my menu...!

Yay! <3 I rather enjoyed this unique picture.   slimedragon1995, aka Drax, drew this picture of me and his Lugia form. I do believe his Lugia self is normally a predator, but now he certainly knows that Fire-types are super effective against Rubber-types. ;3~ Bwahaha! I do rather love the idea of non-fatally 'melting' somebody into a sentient mass using my own fiery temperatures. ^..^ Especially if that wonderful goop can move about!

Heh... I also just noticed. The submission before this has me getting eaten by a Lugia, and this one has me eating a Lugia. :P And I love 'em both! So if anybody ever needed proof that I'm a true vore 'switch' (being hedged right in the middle of the roles of being prey and being pred), this would be a good example. xD