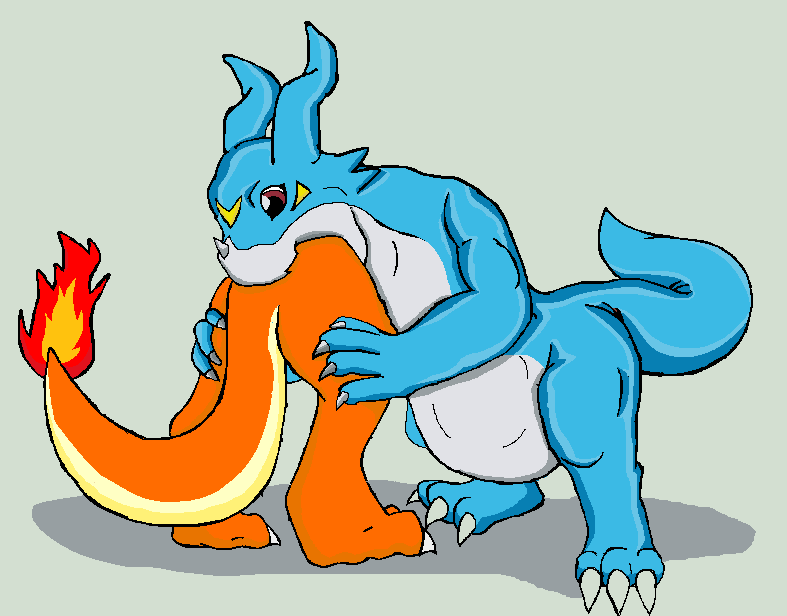 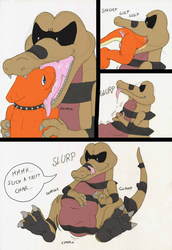 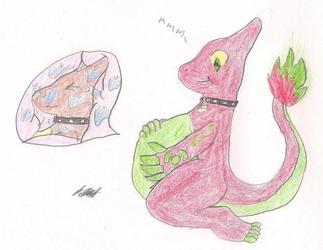 While I personally like and appreciate my Digi brethren, Digimon and Pokemon had always sort of contested one another, having similar concepts with both trying to appeal to essentially the same audience. Perhaps it only raises tensions further that Pokemon is the clear winner in popularity, having better games, a more successful anime, and more merchandise. Still, I like Digimon to a degree; after all, those little handheld Digi-pets existed well before Pokemon, making Digimon technically an older franchise than Pokemon. Gotta respect your elders.

Of course, not all Digimon see Pokemon in the same light. Some are rather upset to be robbed of the more-popular spotlight, such as a Veemon I ran into one day. After a bit of confusion over my name ("No, I'm a Charmeleon, not a Charmeleonmon...!"), it seemed Vee was only getting more upset.

"Look, let's chill out over lunch or something." I offered, not one to enjoy a fight bred from such anger.

"That's a good idea...I think that would be very satisfying!" seethed the Veemon in response...before gaping his jaws and jumping at me!

Glurk, gulp, swallow... I struggled to no avail as the Digimon shoved my head and hands into his throat, swallowing energetically and pulling me lower and lower... This wasn't at all what I had in mind...! x..x

Digi-gullets were apparently quite powerful; before I knew it, I felt my scaly feet wriggling just outside his lips...before those too were covered in slobber and warmed by the Vee's hot breath. I wormed onto my back as my body collected fully into the digital monster's belly, curling up in the cramped and gurgling space.

Well...Pokemon may have won the 'war', but that doesn't mean Digimon can't win some battles...

This was drawn up by   JettAilchu-92, who's a very friendly fellow that often does requests. He's very giving like that. n..n

I figured getting nommed by a Veemon sounded fun. <3 Guilmon is my undisputed favorite Digimon, but I've nommed and gotten nommed by him already in the past, and Veemon is so often ignored over his insanely popular evolution (Flamedramon). So he kind of reminds me of me - being that I'm rather overshadowed by my evolution Charizard and also my pre-evo Charmander. =P