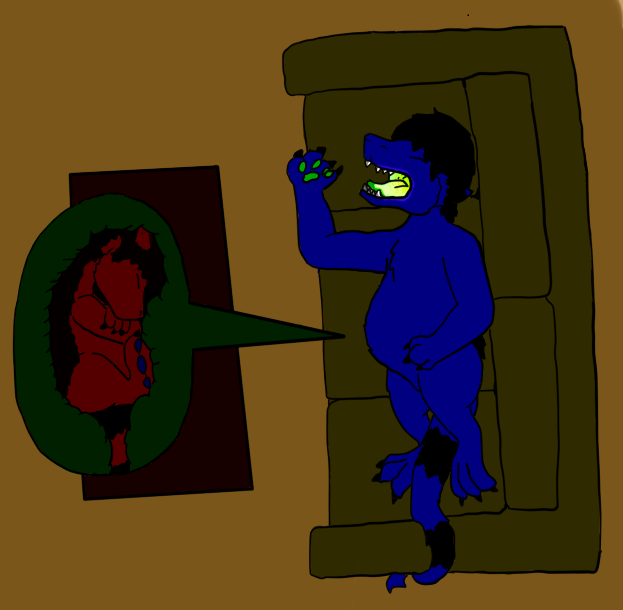 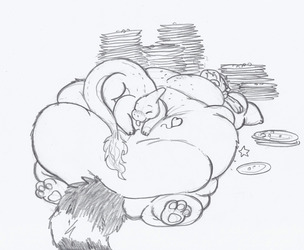 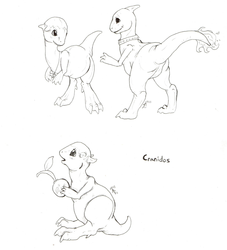 Frost, the blue igwulf, simply rested on his sofa, slumbering a deep sleep. There was nothing out of the ordinary about this. But the room, dark from the moonless night, did brighten lightly every now and again, almost on cue with the igwulf's snores. A careful and quick observer could spot the light-source, flashing out from past Frost's lips on the off-chance he opened his maw. It was a strange light indeed, one that almost...flickered.

Frost, the blue igwulf, curled and stretched relaxedly as he dozed, jiggling his chubby belly about. There was nothing out of the ordinary about this. Except that the pudge seemed just a slight bit unusual, as if the belly sometimes jigged on its own accord - only barely, only rarely. It seemed as if...something were in there. But it could just be a trick of the eye...?

As if innately sensing the critical observation from unknown sources, the still-asleep Frost thwaped his tail against the cushions, rotating his body to face the back of the couch. Frost hugged his arms against his belly, his stomach pressing and squeezing tightly down on...something? Something there, inside...? But...the strong compression hid it well, making it impossible for those in the outside world to discern - indeed, removing it from the world's presence entirely.

There would be no more spying, no more discovery. Frost had something that belonged to him now - a treasure - trapped away and imprisoned tight, following his every whim. He had a treasure he had vowed to protect, care for, and safeguard. For both his desires and duties, the stance was the same - he would not give up what he had.

This picture was drawn up by an igwulf i recently befriended,   Frostbite-w. You could say we sort of hit it off, and we've talked quite a bit. =3

I've always been a big fan of igwulves as well... Creatures created by my best friend   emusal/Reed, if you didn't know. They're fuzzy and cute, but strong and agile as well, being vorishly-capable and quite sleek. I would go as far to say they're my favorite 'original species' that any furry has ever created; Reed's put a lot of thought into them. So, of course, I made myself an igwulf form; a hybrid igwulf/Charmeleon to be exact, an 'igwulfeon'. I drew a picture of this form over a year ago, and strangely, I've not had the form drawn again since, even though my interest in igwulves has only grown.

Well, Charem the igwulfeon has emerged quite a bit in the last few days... <3 Getting to know another igwulf - Frost, of course - really spiked my love of the species, and Frost's friendly personality only compounded that. So, casually, I started appearing as an igwulfeon online, rather than a Charmeleon...and eventually, Frost and I engaged in our first RP. <=3 At first, he simply wanted a meal. But as the RP went on, we discovered that we had a mutual interest in...something neither of us have ever really done. The concept of a prey being stored inside a pred's body...well, quite literally, forever. Not digested, not harmed, just...there. The prey seeing the pred as its world and existence, eventually forgetting of the world outside of the gut entirely. To punctuate all this, the predator would keep his belly squeezed tight...not only in dominance, but also to hide the prey away from view outside, and make it seem like there wasn't even a creature inside the pred. Well...it's all sort of a breath-taking concept, for me. And I had no clue Frost also liked such a thing...until, of course, he did indeed store me away, and the intentions were made clear... In the plot of that RP, at least, I was claimed and made his belly-meal forever. <=3 And I really couldn't be happier.

This picture shows one of the later scenes of our RP. Having eaten me, Frost leaves my long igwulf tail still in his throat and maw, and we both rest together. My tailflame flickers in his maw the rare times he opens it, the only 'evidence' of my existance. <=3 You could say, poetically, that the only thing he lets show of me is my light. <3 (Of course, he eventually nommed this down too, hiding me completely away...)

This description has gone on long enough. <=3 To sum it up? We had a wonderful RP, one of the best I've had in a long, long while. I am very happy to have Frost as my friend. ^..^