That Squirrel’s Been Spyin’ On Me: Image Concepts by CCritt93

HOW DOES SHE KNOW WHAT MAKES ME LAUGH
Secret laughs at a funny face Penny makes at her desk when only he is looking. When Morocco and Chief turn to see what’s going on, Penny puts on her innocent face, complete with halo.

YES, AND HOW DOES SHE KNOW WHERE TO SCRATCH MY BACK
Penny gives Secret a backrub. After a few beats Secret instinctively thumps a leg.

HOW DID SHE FIGURE ME OUT SO EASILY
Secret’s color fades away as Penny sees right through him.

I SWEAR THAT SQUIRREL’S BEEN SPYIN’ ON ME
Secret, now transparent, points two thumbs at himself.

WHERE DID SHE GET THOSE BIG BROWN EYES
Closeup of Penny’s eyes. She bats them at the end of the line.

HOW DOES SHE KNOW TO WEAR WHAT I LIKE
Closeup of Secret’s eyes. Start neutral, then blink into wide eyes. Zoom out to a seduction shot a la “The Graduate.”

HOW COULD ANYBODY FIT ME RIGHT DOWN TO A TEE
Penny spin-changes from her office dress into an oversize T-shirt with the CCritt93 icon and the phrase “Secret Admirer.”

I SWEAR THAT SQUIRREL’S BEEN SPYIN’ ON ME
Zoom out to Secret pointing his right thumb back at a waving Penny while holding his left paw up as if giving an aside to the camera.

’CAUSE SHE’S BEEN USIN’ INFORMATION I HAD LOCKED UP DEEP INSIDE
Penny opens a file cabinet and pulls out a dossier prominently labeled “Critterden, Cranston C.” She leans back against the cabinet and casually peruses the dossier while nonchalantly twirling a keyring around a finger.

TO BE THE PERFECT WOMAN I’VE BEEN LOOKIN’ FOR ALL MY LIFE
Penny pauses to heave a dreamy sigh, then hugs the dossier, swaying to the beat.

EITHER THAT OR THAT SQUIRREL’S BEEN SPYIN’ ON ME
Secret ducks out of Penny’s embrace and steps aside. Penny continues to sway, oblivious to the fact that she is now dancing with thin air.

NOW SHE KNOWS ALL MY INNER THOUGHTS
Penny lounges on a sofa and reads from Secret’s diary. She finds a passage that makes her gasp and blush.

’CAUSE SHE’S GOT WAYS OF MAKIN’ ME TALK
Penny pounces and tickles Secret.

WHILE SHE REMAINS A MYSTERY
Penny standing in a stock pose. Fade her to a silhouette filling with red question marks to the piano riff.

I SWEAR THAT SQUIRREL’S BEEN SPYIN’ ON ME
Secret stands on the witness table in a Congressional hearing room, his right paw raised as if under oath. Use a low camera angle modeled after TV coverage of Oliver North’s testimony in the Iran-Contra hearings.

’CAUSE SHE’S BEEN USIN’ INFORMATION I HAD LOCKED UP DEEP INSIDE
Penny digs up dirt on Secret online. We see browsers open to FurAffinity and Yahoo!, IRC and instant messenger windows, and details from some existing Secret fan art.

TO BE THE PERFECT WOMAN I’VE BEEN LOOKIN’ FOR ALL MY LIFE
Webcam view of Penny typing briefly, then resting her chin on her paws and lowering her eyelids for a sly look.

MAYBE WE’RE JUST TWO CRITTERS MEANT TO BE
Secret at his own computer, evidently in a video chat with Penny. She jumps partway out through his screen and kisses him, then ducks back in.

EITHER THAT OR THAT SQUIRREL’S BEEN SPYIN’ ON ME
Secret becomes googly-eyed as he reels from the kiss. A thought cloud forms.

MAYBE WE’RE JUST TWO CRITTERS MEANT TO BE
Zoom in on the thought cloud as we see Secret holding Penny’s paws and looking into her eyes. He’s wearing a top hat and a tuxedo; she’s in bridal attire.

EITHER THAT OR THAT SQUIRREL’S BEEN SPYIN’ ON ME
Penny gives Secret the I’m-watching-you sign from “Meet the Parents.” The thought cloud pops.

OH, THAT SQUIRREL BEEN SPYIN’ ON ME
Penny walks to a mirror disguised as Secret. She flings off the fedora and flips out her unfettered hair.

TALKIN’ ’BOUT THAT SQUIRREL BEEN SPYIN’ ON ME
Penny musses her hair and poses a la Marlo Thomas in “That Girl.”

THAT SQUIRREL’S BEEN SPYIN’ ON ME
Follow Secret walking along a sidewalk. Penny peeks out from a tree, a fence, a nearby building, a manhole cover, etc. At various times she may wield binoculars, a telescope, a dish microphone, a smartphone, etc.

SQUIRREL BEEN SPYIN’
Hold camera as Secret continues to walk out of frame. Penny pops up right in front of the camera, holds up a book titled “How to Keep a Secret,” and gives a wink and a thumbs-up. Fade out. 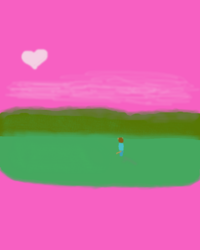 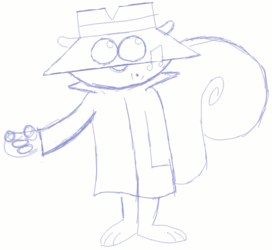 That Squirrel’s Been Spyin’ On Me: Image Concepts

Lyrics adapted from Billy Dean’s 1996 single “That Girl’s Been Spyin’ On Me” (Tom Shapiro/Max T. Barnes).

A skeletal treatment for a Secret cover video.