Where I've Been~ by Brown 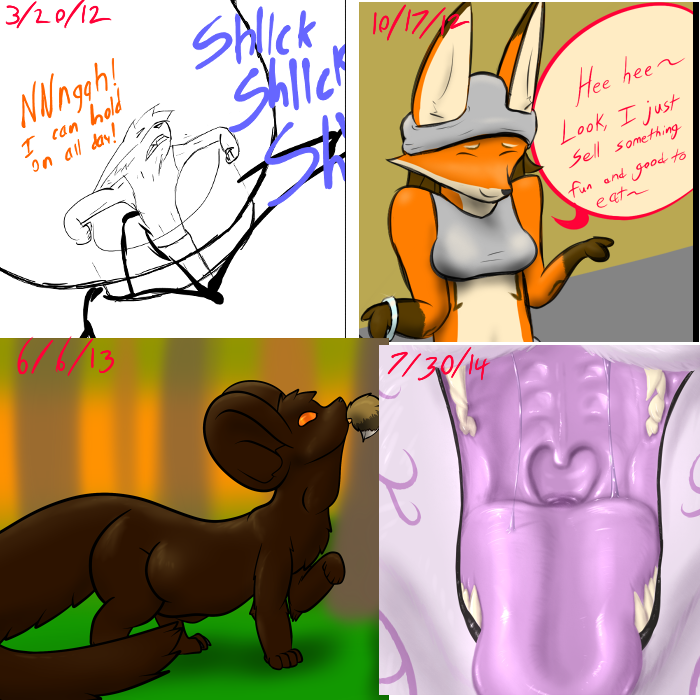 So, I have been reflecting on my art a lot, as I always do, trying to look at what I can improve. And I derno. I thought you guys might be interested in a little thing, showing bits of my art from the time that I started to a few weeks ago, with my current most proudest work~

When I posted these to FA is listed on each, and at the point I posted them, that was the best I knew how to do. Each of these are or were a part of a project that I was super proud of at the time~

And here are Links to each, should you like to go look at them full size~

Now, I just wanted to say some things that might get a little long... Because seriously, when I started seriously trying at art, I actually never expected to stick to it.

You see, growing up, I always wanted to draw, and I did try for a long time to draw on pretty much anything with open space so long as it was made of paper, specifically in school. This... was not particularly well received. I mean, I would do my work in class and I wouldn't draw on anything but paper. There would be stick figures or houses or trees or tiny stupid comics in the side margins of homework or tests that I completed, this because a lot of the time I did not actually have any free paper to doodle on.

It was a problem that under a number of occasions would get my mother involved by the teacher, and she would come in and they would speak about me like I wasn't there, and at the end of the day I would just get to go home and get a pretty stern reprimand.

This was the biggest trouble I really caused growing up, was I wanted to draw. And so when I was finally given charge of my own lunch money for school, I could only think of one thing to spend it on for a little while~ I got 2 dollars for lunch per week, and after a few weeks, I could afford a nice notebook full of lineless paper and a couple of nice pens~

I was always reading during those time, I read everything in the school library in one year even~ I would have read all the time, if I had been allowed to read in most of my classes. Buuuut, I couldn't~ So, I took my paper and my pens to class, and would doodle when I had finished my work~ Pretty quiet kid, really. But then one day, a particularly unpleasant english teacher had taken a disliking to me, and she seemed quite displeased that I would even consider TRYING to draw or read in her class, and one day confiscated my notebook in few minutes before class ended. Not because I was drawing, I knew better by then, but simply because the notebook was out. She then looked through it.

I wasn't bothered by her looking at it, there was nothing to hide in there, just my stick figures and attempts to draw dragonball z armor and such. [Okay maybe I should have hid it better] So, while I was annoyed that she had taken it, I figured I would just ask for it back at the end of the day. To my surprise, I was called to the office later that day, where the principle and one of the councilors sat down with me and questioned and scrutinized over everything in the book. I answered honestly about depictions of spiky stick figures being dumb and poorly drawn anime things jumping around for most of an hour. I got sent home early that day, suspended for a few days, and the school decided that I needed to see a psychiatrist during that time,

Fortunately, the only one who seemed to have any sense in the situation was indeed the psychiatrist. I talked with him for a while and happily showed him what I had done. In the end he didn't seem to understand why I had been sent there. I was being a kid, expressing creativity. He even applauded me for doing so without causing damage to anything.

Even still, my drawing had caused problem and at this point, had cost my mother money. As such, it was quite against the rules from then on for me to draw much of anything. What I did, had to be done in secret, outside of school and away from the house. Here I was, smuggling my dumb doodles around like it was a crime, what I was doing. And eventually, the risk became too great. I quit drawing.

My upbringing was really either entirely dismissive or openly hostile to my attempts at being creative. Not that especially wanted recognition in those days, but I look back on it now and wonder... why didn't they just let me take an art class? I know they had them. The schools I went to only allowed that class for half of one year. Which as you might again imagine, was not nearly enough time to get all of the art out of my system. And that class was more about sculptures and general 3d art than it was about drawing, which was what I really wanted to do.

So, for the majority of my schooling years I did not draw. I read and all of that, and was generally pretty quiet.

Cut to a number of years later, and I am considering drawing again... after all, school is over, I have had a job for some years now. [since I was 16~] And here I was, living out on my own with a girlfriend. Life was pretty sweet. Except, for some reason said girlfriend decided that she was quite jelous of me doing anything that didn't involve her, specifically. So, I wasn't allowed to draw what I wanted... no biggie~ I would draw her! :D

That did not go over well, and that relationship would eventually fall apart, not that I didn't try for a couple of years.

And so through a course of events I'll not bore you with, I had more or less lost most of the things important to me eventually. I was no longer really welcome in the company of my family, the majority of my friends had been run off my girlfriend, and now, I had lost my girlfriend too. I worked in a job I hated, and was hoping would only last a couple of months (was there just over 3 years) and. I was all alone, with the tablet I had bought a couple years back...

And so, I doodled. I got used to using the tablet again. I opened an FA account, though I never intended to post anything. The name of that account did reflect my state of mind and self worth at the time. But, I found that there were some ideas that I wanted to draw, and I had a LOT of pent up energy.

I saw some things that I liked. I saw some art which I looked at and said. "I want to draw like that.... Buuuuuuuut, I'll never do it. I haven't got the ability. It will never happen."

So, I drew. And not even a month after I had opened the account, I started posting things.

So, that's pretty much my life story. I wanted to tell it, because that's where I have been. Some folk have commented about this talent I have at drawing or whatever, like it is some natural ability, and then go on to tell me about how they can't because they don't have that.

I fought for every bit of skill I have so far, and fully intend to continue doing so for as long as I have eyes, hands, and life.

And, just saying, if there is something you want, it's probably not gonna just come to you. You have to go get it, grab ahold of it, and hang on. Life is bumpy, but if you keep at it, one day you might surprise yourself.

about blabbering draw i just me on things why