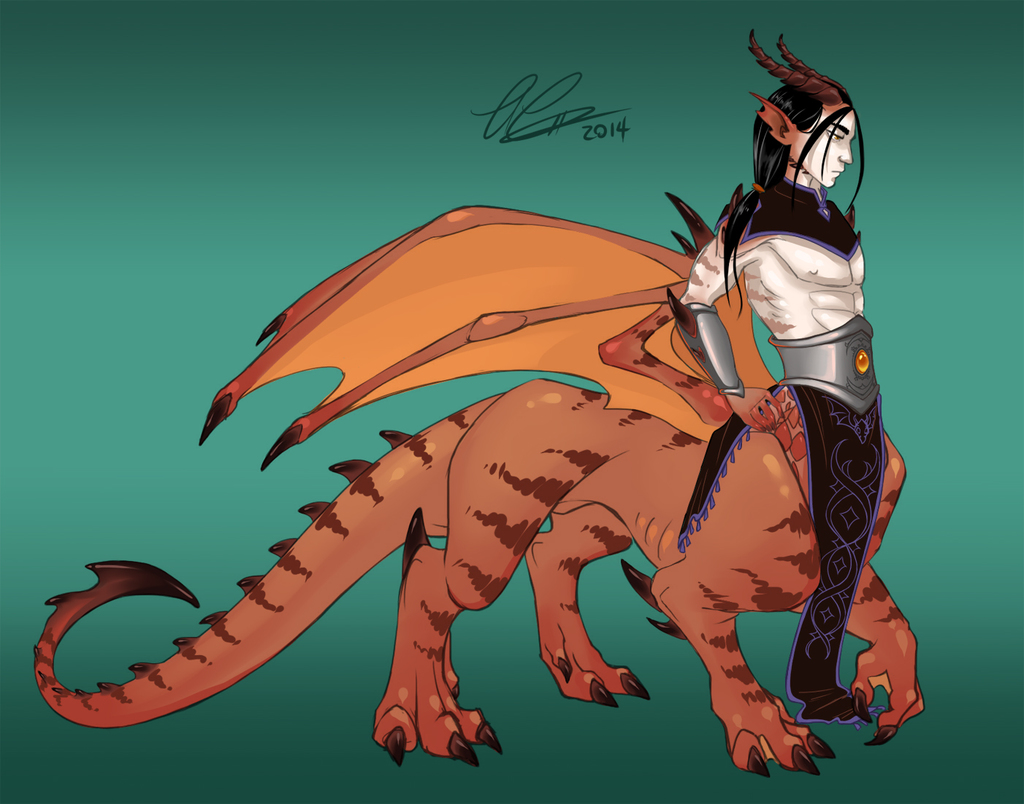 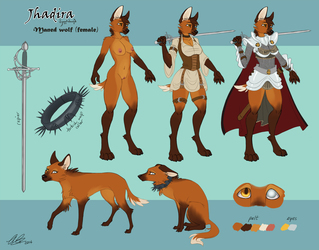 After a lot of sketches and scribblings, I finally finished a fullbody colour of this guy :3 Meet Abraxas! Antagonist to my Protagonist, Aurora.

Now for a lil' story!

The doors of the Council chamber flew open; the meager barrier that had held it shut seemed to crumble like a twig underfoot. The thunderous stomp of his quadruped gait shook the ceremonial talismans and knick-knacks that hung from the musty walls. The collection of aged Drakids who were seated around each other gave a shout of alarm and complaint before they simultaneously muted themselves to a dismal mutter of discontent.

Abraxas slid casually into the room, thorned tail swinging in time with his step, dangerously close to several guards who now stood baffled and dumb by the gaping door, looking as if they'd flee at any moment through the only path of escape. He approached the end of the ancient wooden table that had no doubt held witness to countless meetings and plans of action and boring law-makings for several centuries and, after the previous occupant had fled the scene, promptly seated himself. The chair, under the heavy burden, immediately shattered underneath him though he didn't seem surprised, merely lifting his beastial body to assume the polite crossing of arms, only to crack the solid structure into a shower of splinters straight up the middle.

The room was sent into a frenzy of "Abraxas! You have no power here!" "Leave now boy, don’t be foolish!" "Abraxas, Thorned One, with all due respect-!" until the dragontaur’s cool voice arose in a tone that came just short of causing a chill in their old bones. "I apologize… for my tardiness. The meeting may commence! I’m very interested to contribute to the conversation, on the topic of Thylea-"

"Abraxas!" One voice rang out in a shout amongst the group, the rest immediately hushing in terrified silence. “You are not in command here, you have no say! You are not our King!” The man appeared to be in his later years, his spine slumped from the ache of bearing his girth for so long, his scales faded from their youthful palor, his bottom jaw jutted and quivering, with rows of crooked, stained fangs. He paused and regarded the 'not-King' from the shelter of the other end of the long table, allowing his shrill voice to dissipate from the air. Abraxas fell silent, smiling politely, listening intently, until the elder’s courage returned. "You mock us! Monster, who should never have been hatched!" The last word hit a shrill note of disparity, his yellow orbs dancing back and forth around the room for any sign of support in the matter, to which he found none but the cowering countenances of his fellow dragon-men.

The crimson gentleman's jaw tightened and he simply drew in his breath, his movement punctuated by the creaking and crumbling of wood underfoot. Soon the quadruped dragon-half was at an upright, towering the height of at least two men above the crowd. "I apologize again, my fellow Drakid... some of those present... have been misinformed."

The walls of the Council room were coated in a thin mist when he was finished, the majority of the carnage pooling now in the corners of the stone flooring. Abraxas stood, painted abstractly in a crimson that barely stained his charming scales, and smiling to himself in pride of his good work. "Misinformed and mistaken." His cool voice raised again in nothing more than a subtle purr. "I AM your King."