US Army Caps by Bellumsaur 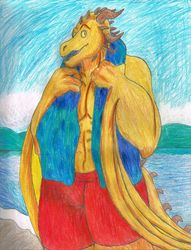 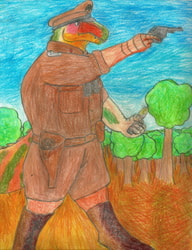 A little something I did in Krita about two years ago now (how time flies), I decided to do a rudimentary overlay at an attempt at lighting and shadowing, and I feel the results are... mixed. Anyway, since the USA in my weird Alternate Earth is aligned with Imperial Germany, I thought it would have a lot of Germanic elements when it comes to the uniforms and whatnot. On the left is a Camptosaurus lieutenant in the infantry of the Regular Army (that being the pre-war standing army) wearing an M34 Garrison Cap, an improvement over the M18. On the right is a Reservist Sergeant in the Corps of Engineers wearing an M42 Patrol Cap, introduced partway through the war and inspired by the Austrian-style caps worn by the Mountain divisions fighting the Californians in the Rockies and Sierra Nevada. It's also a good showcase of the shoulder boards and collar buttons, intended to show rank and unit affiliations.