Balina roars loud between the earth and the sky by Balina 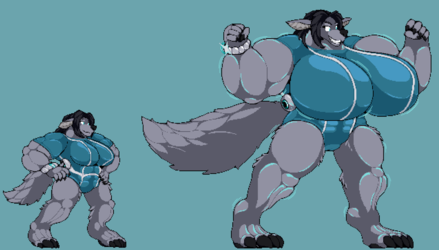 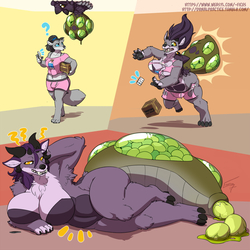 Balina roars loud between the earth and the sky

For anyone having trouble with the flash, the video is up on Vimeo as well.

As covered previously, footage taken from Balina Amarini's reality is routinely taped and repurposed into an only slightly fictionalized version of itself, marketed by BTI as "Boom Moof". Like any hit prime-time series, it needs a catchy intro. This is that intro, which serves as the rough outline of an episode. A capsule, sent by forces unknown somewhere in the Carina constellation, lands somewhere near a population center. Inside lies one lifeform from the alien homeworld, modified with a Credulic Reactor, along with an inordinate amount of liquid plotonite fuel. Upon crash-landing, the capsule deploys, flooding the creature with the entire supply and creating an nigh-unstoppable monster. Prior to the project that yielded Balina Amarini, this resulted in a long, protracted battle with conventional military equipment, resulting in massive losses in dealing with a single monster.
With Ms Amarini on the job, matters are considerably more upbeat. Alerted to her weekly fight, she scrambles to the hangar in order to prepare for action. Her own Credulic Reactor is brought online, bringing her up to scale with the current threat. She is then fitted with the most advanced weaponry ever created, most of it powered by her own unique biology, before being deployed and sent into battle against the alien menace.
They never stand a chance.

This may be the single most ridiculous thing I ever get to commission, and it's definitely another one of those things that me-minus-ten-years would ever believe would happen. "Animated intro to a show you invented for the sake of using a bunch of kaiju ideas, to the tune of Japan Break Industries" sounds like crazy wish-fulfilment even before you factor in that Commoddity utterly crushed it in making the animation. This is better than I could have possibly hoped for, hitting all the right notes and capturing that same boundless enthusiasm I want people to get from Ms Amarini.

I would strongly recommend that anyone who wants to see more of this kind of excellence hit up his various accounts below, then subscribe to his Patreon and keep an eye out. The next animation was raffled off earlier this week, but this is both where he informs people that they're happening and where the preview materials go up.