Chaz didn't understand why they called the space station Polenta. It bothered him every time he sat in the foreman's office, counting the floor tiles and the ceiling tiles while his boss spoke; wishing they'd work out how to send messages direct to his brain so he could avoid wasting time in rooms like this one.

Polenta. The station orbited the single Moon of Earth, and these days Polenta Station was an important waypoint in the mining of lunar resources, both for people and for cargo. And as far as Chaz could tell, cornmeal wasn't involved at any point. His own best guess was it being a totally arbitrary name, dreamed up so that people like him would stress over it.

Beyond the name there wasn't much he didn't understand about the station, at least in terms of its electrical systems. Chaz was a technician, and a good one, and in just four months on station he had improved and consolidated all manner of computers and machines to the point that they almost ran themselves. Sadly, this allowed the station to lay off half of his team, and those who remained had few kind words for him as a result. Computers were fine, but he thought the people of Polenta Station were all crazy, and he kept out of their way as much as possible.

Chaz was a serir, a creature somewhere between squirrel and armadillo, with flat teeth and a stumpy tail. Mostly he had sandy brown fur, with brown hair and square glasses. He wore hoodie and jeans most of the time, with a pair of flip-flops or open clogs, and no force on the station could compel him towards anything else; whether he was knee deep in engine oil or reporting to the station's executive board. Usually in that order. For him it was comfort, and principle, and; who the hell really cares anyway, they're clothes, mind your own business.

Despite appearances, Chaz was quite content. He looked very blunt and grumpy, and didn't say many words, but he was honest and straightforward. His foreman, a jumpy squirrel called Florin, had gotten used to it.
"Are you listening? I wouldn't ask you to do it if I could avoid it," he said. "But the solar array alignment isn't working, and yes it's probably one of your colleagues' fault, and yes they probably should go down and sort it. But they won't, because Jen's sleeping for her late shift and Rafael is in Medbay. So it's down to you."
"If you'd approve my funding for robot tech under Station AI control, we wouldn't have this problem."
"And Control would fire more techs. You can't fix this station by yourself all the time."
"No, I know that. That's what the robots would be for."
Florin pushed his hooves against his temples and tried to will away his headache. "Yes, you've made your point. Now please go fix the thing."

Chaz had a few friends on board Polenta, but the one he spoke to most was Station AI. Messages would flash over the display in one of his artificial eyes, and he'd respond out loud, which tended to confuse passers-by.

[You are being quite hard on your foreman,] it said, as Chaz descended in the lift. A toolkit in his hand, a toolbelt around his waist, and a few snacks in his hood; all was as it should be
"I just don't want to roll over and clean up after everyone else. I'm not a trained puppy."
[They aren't making mistakes to spite you. Sometimes things just happen.]
"Mm. It's funny how it only ever seems to affect my shift, though, isn't it?"
[Statistical analysis suggests you are talking bollocks. (p < 0.05)]

This particular solar array was all the way at the bottom of the station, where few people tended to go if they could avoid it. Chaz passed a row of hazmat suits, and while most of the station crew would need one, he just headed on through. A little radiation wouldn't bother a serir, and he wasn't going anywhere particularly dangerous.

When he reached the control room for the solar array, he paused at the sight, with those thick clogs sliding on the polished floor. The great mechanism was spread over two floors, internal gears and long reinforced arms that pushed out through the hull of the station. A great pipe had split, and thick purple coolant ooze poured out; it had gummed up the machine, and formed a pool on the floor and underneath the machine. No wonder it couldn't operate.

Chaz rolled up his sleeves and selected a large wrench from his belt. "So, I go to the source and stop the coolant flow. Then I patch the leak and somehow we flush out the mess… hey Station, can we open this deck out to vacuum?" he wondered, clogs walking over the thin sticky coolant, each step punctuated with a gentle sucking sound as he lifted up his foot.

Station was oddly quiet, and the serir wondered if he had found a radio blackspot. Or maybe the coolant was magnetic and that was the cause. Secretly to himself he found the noise of his footsteps very satisfying, and slowly crossed the room; his expression was about as close as he got to a smile. The white clogs were messy underneath now, but they'd clean just fine.

"I don't know why it should be so sticky, actually," he said out loud, partly to himself and partly to Station if it was able to hear. "I guess the coolant is for working in a vacuum, not our air." He had to stop suddenly, as he wasn't able to lift either foot from the gooey darkness underneath; slowly and surely his clogs had become one with the coolant. Even worse, he seemed to be sinking, like perhaps there was not as much solid floor under him as it seemed.

"Err, Station, I think I'm stuck," he said, dropping his wrench with some surprise and a wet squelch. Both clogs wiggled as he tried to free them. He pulled very hard on one of them, deforming the goo as though it was solid rubber, but he was literally glued to the spot. And with Station quiet and nobody else likely to come looking for him for a while, it would be quite a long wait ahead! Unless there was something he could do from here.

Although his shoes were caught, his feet were not. He hadn't waded too far into the goop, so a cunning plan came to mind; he would just dash out the way he came, barefoot. It was a good plan, and he slid his paws out of the shoes, balancing on tiptoes for a bit before he chose his moment to flee.

One thing Chaz hadn't counted on was how much stickier his fur would be than his smooth sided clogs. Each footstep squelched as he touched floor, and at first it was working. But, soon the ooze had clung around his toes and his heels, and his paw sank down deeply into the thick layer of purple, and it didn't come up again. The serir balanced on one paw for a minute or two, and then gave into the inevitability of his plight and set the other down as well.

On the other hand, Station was back online over here, and a few messages popped into his view as the AI caught up with events.
[Nice try. I'll let Florin know you've been caught up. Are you really that stuck? The floor isn't that far down…]
"It is really that sticky. It's like it's set around me," said Chaz, crouching down and pressing one of his hands into the goo, lifting it out to leave a neat pawprint which slowly filled itself in from all sides. As for the coolant on his hand, it stuck quite tightly to give him an almost cartoony shape. At least he could be amused while he waited.

Jen was sleepy, and did not appreciate being disturbed. Still, after some convincing and a big cup of coffee from her foreman, the jumping spider girl stepped out of the lift and walked towards what was Chaz's last known location, with Station guiding her along.

When she arrived at the spill site, Chaz was stuck not just by his two feet, but by most of his legs, and one of his arms as well. The free hand waved as he heard footsteps, for it seemed he had just become more and more curious and surrendered more of himself to the sticky coolant, trying to test its limits. Anything to keep an idle mind distracted.

"I woke up for this?" she grumped, a bit bemused because of just how silly it was. "You goofball. Maybe I should leave you there."
"Please don't! Although I don't know how you'll get me out."

Jen held up a laser cutter and gave the biggest mean grin she could muster. "This might work! It'll be interesting, in any case. Now hold still, if you wanna keep at least one of those precious few legs of yours…" 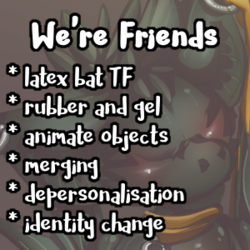 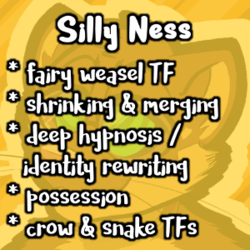 A one-day story commission for chazgelf where Chaz the serir goes all the way to a space station, which is about the furthest from a tar pit you can conceivably get, but he still manages to meet up with some sticky goo anyway. It's like it's following him or something. Gosh. :3