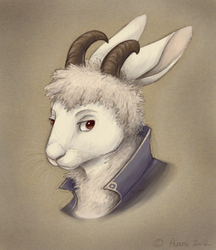 The third bookmark (and sadly, also the last) of this series: the element Fire. The portrayed characters all have Fire as their dominant element, which means they are energetic and creative, but also have short tempers and can be very hot-headed at times. Clockwise, starting at the top: Esben the beech marten, probably one of my more "villainous" characters, very changeable, both in his decisions, but also in appearance: he is a trickster character and can change shape at will, like flames, he never looks exactly the same way twice. Can also be very creative with his shapes and definitely doesn't limit himself to existing lifeforms. Jacke the fox, Lamia's brother. Jacke is clever and creative, being a city fox, he has come up with several food sources 'wild' foxes wouldn't think of. But he also is brooding character, he was always the one being picked on by Lamia and his anger is never far away, it smoulders within him like embers, waiting for a breeze of oxygen to flare up. Millie the mouse is a very happy girl, full of energy and a desire to do and see as much as she possibly can. She's got a great imagination and loves listening to stories, forming pictures in her mind. She's easily insulted though, and often takes things personally while they may not have been meant that way. Sibirica the Siberian weasel. Probably my most elemental character, to me, Sibi personifies her element and started out that way too: the very first concepts had her as a guardian of fire, and a little later as a fire demon shaped as a Siberian weasel (who are known as 'Fire weasels' in German, which fuelled the idea even more). Unlike the others, she also has control over her element and can manipulate and control flames, as long as there is a source. She can't create them out of thin air unless it's very sunny, dry and hot (so not like a Pokemon does, but more like the firebenders in Avatar, to give you an idea). Sibi too is very impulsive, hot-headed and has a short temper. Her power excites and terrifies her at the same time and she does have some issues one might take for insanity. Finally, Lamia the fox, Jacke's sister. Lamia too has "villainous" traits, most notable she's pretty sadistic and self-centred. She's energetic (very fast runner) but has little patience. A very beautiful fox (unlike Jacke, who's scruffy and too thin) she's like fire: beautiful, but come too close and you get bitten.

I wanted the fire bookmark to be red, not orange or yellow, but real red. I don't use the colour too often but I really like the result. Also another reason is that most of the characters are orange in some way and they stand out better with such dark red. The flames are more stylized, like the upward triangle on the bottom, than the animals, again to provide contrast.

Like the Water and Earth bookmarks, this one is made of Bristol smooth paper, which is very thick and works great with both markers and China ink. The painting is mostly done with Copic markers, and has some Prismacolour pencil details. For some reason the scan looks so much harsher and messy than the original, I'm not sure which settings I need to change to get rid of that effect. Also, my scanner eats red so I had to touch it up in Photoshop. Sorry for the watermark, but I am very proud of this and don't want it stolen :/ I drew this back in the summer months, but never got around to scanning it. Anyway, enjoy!

Art and characters are © to me, Avanii
Please do NOT use or repost this, this is NOT free art, thank you!