“So, you see, my lord, we were sent to investigate, but it seems to be nothing so far as we can see,” Nathan explained while their magnanimous host poured wine into goblets. “We haven’t seen any bandits or raiders or found any other signs of malevolent forces, so we came to you to see if you had any further information that we could go on.”

The elven lord only shook his head as he offered Nathan and his lupine partner a pair of goblets. “Unfortunately, I know of nothing that could be causing these supposed disappearances. As you can see, my lands are quite peaceful. My people are obedient, and all we wish to do is to continue to produce our crops for the king.”

Dawn nodded agreement then shook her head in frustration that Nathan could agree with entirely. It hadn’t been an especially large bounty, but the reports that had piled up had warranted investigation, and they had taken on the task in the hopes of having an easy win and chunk of gold to spend afterwards. The guild kept reasonably good tabs on its people, mostly in case any of them turned bandit, and tried to maintain good records on the whereabouts of all of its affiliated members. It had taken a few months for the recordskeepers to realize the discrepancy, but it looked like several individuals and teams had come through Lord Velcost’s area of influence, all heading for different parts, but none had arrived at their destinations.

The only connection that anyone could find was this little chunk of the realm. It was a major agricultural center, slowly growing as its population increased and more land was granted, with nothing of more value than grains and the lord’s coffers. There was little for a bandit or raider to want to take aside from a little rest and relaxation, especially with rich goldmines to the west and a diamond mine to the east. Even the south had better pickings with a trading port. There had been no traces of a more malevolent force or power gathering either; no necromancer killing heroes and raising them for an undead army, no rebel uprising bribing them to its cause, no raider warlord sweeping through on a rampage, nothing at all.

“I just don’t understand how so many people could just… disappear without a trace,” the wolf stated. “Have you heard anything about adventurers passing through or any reports of fighting at all?”

“Adventurers pass through all the time,” the elf replied, relaxing back into his plush chair with his own goblet and taking a long sip. “No word of them ever comes to my ear unless they cause trouble, and those are reported to both the guild and the king. You’d do better to ask the innkeeps along their routes.”

“We have,” Nathan grumbled. He sighed and took a long swallow of his own drink. “We’ve talked to anyone and everyone we could think of, which is the only reason we came to trouble you with this now. We apologize for the inconvenience, but could we perhaps speak to your own recordskeeper? Maybe some reports have come by that they thought didn’t deserve your attention?”

“Of course, of course, but take your ease for a moment first! From the sound of it, you’ve been hard at work to discover the cause of these disturbing disappearances, and you deserve at least a short rest, yes?”

Nathan sighed again and sank into the chair the lord indicated, Dawn doing likewise. It was frustrating and utterly wearying to come up with dead end after dead end, and the wine was very good. Then again, this realm was graced with an excellent wine vineyard, though they didn’t do any of the fermenting themselves. Perhaps he was a bit more weary than he had thought, because the softness of the chair and the calm voice of the lord had his eyes drooping. Then a phrase caught in his mind.

“There’s no need for heroes and adventurers in my realm, but you’ll soon understand why. Or, well, you won’t.”

It wasn’t the words so much as the tone that caught his interest, and he perked up to ask a question, but found his words muddled, his tongue and lips gone numb. The doziness fled his mind as he jolted out of his chair only to stumble over his own feet and fall to the floor. Poison!

“Oh, yes, such hearty folk you adventurers are,” Lord Velcost chuckled, stirring the fire with a long poker, then leaving it standing in the flames as he paced across to stand over Nathan. “You make this so much more difficult than it need be. Just go to sleep, and it will all be over when you wake, and you won’t even care or worry about it.”

Nathan glanced back to see his lupine partner woozily attempting to struggle against the two guards that had been standing by the door into the lord’s study, but it seemed that the toxin was affecting her just as strongly. The human turned back and clumsily grabbed the elf’s ankle, attempting to trip him, but to no avail. He had no strength in his limbs, and all he did was paw at the leg ineffectually.

“Well, no matter, if you’re awake or not. Just watch the sparkly lights and try to think pleasant thoughts. It will make things easier on you.”

Nathan saw sparks flick between the lord’s outstretched hands and braced for a lightning spell of some kind, but only felt an odd warmth wash over him. He glanced back up in time to see the elf direct his hands towards Dawn as well. A rippling wave went towards her and seemed to meld into her now-bared fur. The guards had discarded her armor and now dropped her to the floor. The pair of boar anthros came towards him and began removing his own, and he couldn’t even fight back against them with more than a light slap.

As they stripped him, he saw the first changes begin to creep over him. The tips of his fingers blackened and hardened, fur beginning to sprout and crawl down his arm. His nose began to press outwards turning his face into a snout. He was being transformed! He had to fight, had to get to a weapon, had to… had to… do… something…

He paused in confusion, his thoughts grinding to a halt, and tried to remember why he wanted to fight and what against. Nothing came, and he wondered why that was. Then movement caught his eye. Near the door, someone was lying on the floor. A cow, it looked like, but a strange one, with a cow’s head on top of the wrong body, hooves and hands right but limbs wrong. It was fixing itself, though, white crawling up along the limbs to leave only patches of darker fur, thickening the muscles and filling her out more.

He felt ticklish and sat up to look down at himself. The same thing seemed to be happening to him. Brown fur was sprouting from his arms and legs, creeping down his torso, muscles growing larger and firmer beneath it. There was a slight hint of alarm in the back of his mind, but it faded quickly. Whatever was happening to him, it didn’t hurt, and the cow seemed to be fine as well. His lord wouldn’t let anything hurt him, anyways.

“Adventurers… heroes… bandits and raiders and warlords and whatnot, such rabble!” the elf drawled. “What use are any of them? Nothing but war and conquest and destruction and waste, and the king allows it all! Well, that won’t be the case for much longer. Another year or two, and I will have enough lords under my control to force him to step down. Then I can take his place and subdue the rest of the kingdom, make it peaceful, make it pleasant. Doesn’t that sound nice?”

Nathan nodded his head in agreement. Peaceful and pleasant did sound nice, much better than fighting and hurting people did. His lord was a very good lord and only wanted the best for his people. Everyone else would come to see it, too.

“Now, unfortunately, we do have to do one unpleasant thing.” Lord Velcost pulled the poker from the fire, revealing a glowing brand. “Now, I know you wouldn’t mean to wander off on purpose, but you might get confused or some raider band might take you as a slave, and we can’t have that. This will make sure that I can find you, no matter where you are, and make sure that you are safe. Do you understand?”

He nodded again, though he only really understood that his lord wanted a way to find him and keep him safe. He followed instructions to roll onto his side so that his flank was exposed and watched as the branding iron was pressed into his flesh. It took a few moments for the heat and pain to sink in, and he let out a bellow, jerking away from it. Those few moments were long enough though, and the lord placed a soothing hand over the wound to wash away the pain with coolness and pleasant feelings.

“That’s a good horse, a very good, very dumb horse. Only a little bit of unpleasantness, and now everything is better.”

Yes, everything was better. The lord made everything better. He hoped that soon everyone could be under his lord’s command so that they could all have safe and happy lives. 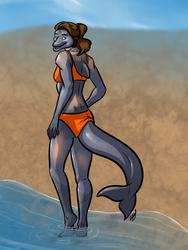 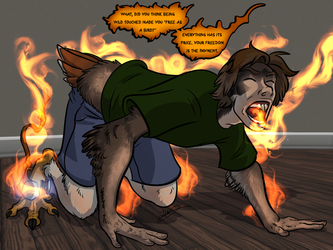 Nathan and Dawn come to an unfortunate end. Inspired by https://www.furaffinity.net/view/14559361/