A Price For Everything by ArrowQuivershaft 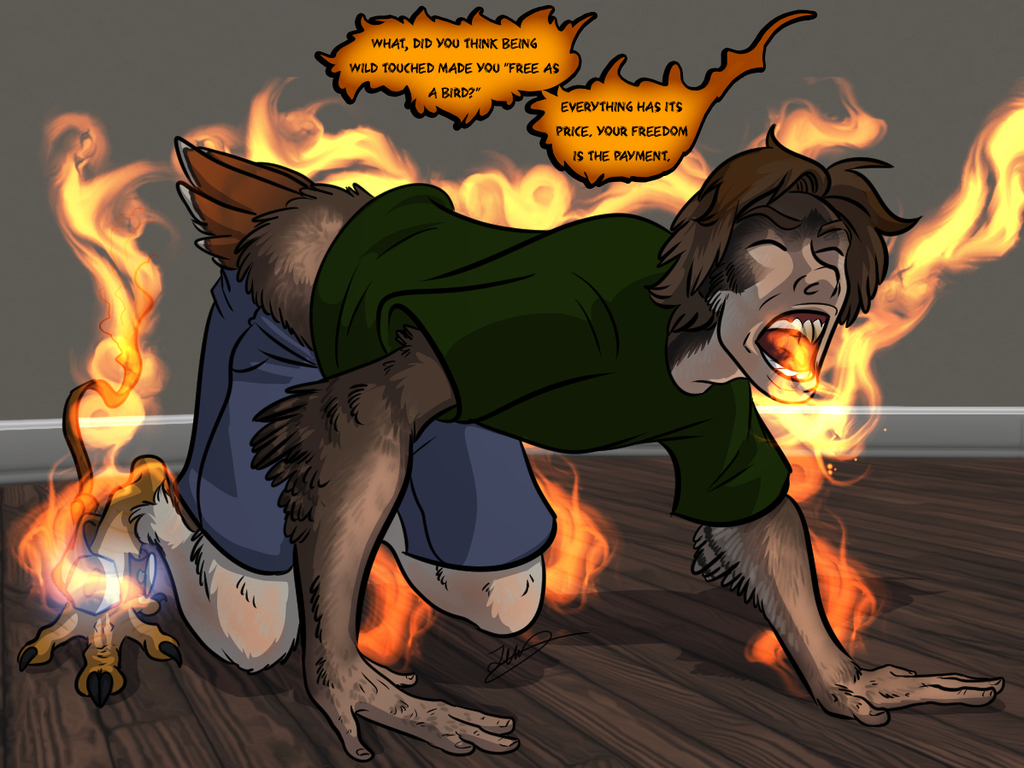 Rich entered his apartment and immediately knew that something was wrong. It was nothing he could point directly at, just a feeling, but it was strong. The door had been locked, nothing was out of place that he could spot from the entrance, and no shadowy figures lurked in the corners, but there was definitely something wrong. He set his bag down by the door and closed it as quietly as he could, keeping ears and eyes perked for anything that might help indicate what was going on.

It was a tingle on the skin, a slight scent in the air, something just below normal perception, but Richard was not a normal human. While he did his best to keep to himself, and especially to keep out of the way of other beings of the veil, there were still things that might come hunting him instead. A spellcaster out for some rare ingredient that he might provide, another shifter looking for a tryst or a fight over territory, it could be any number of things, and they all left unique traces that could be found. In some cases, it might be nothing more than a specific magical resonance, but what he was feeling didn’t match anything he was familiar with.

He performed a thorough search, living room, kitchen, bedroom, and bathroom, turning up nothing still. It wasn’t until he completed the search and stood once more in the living room that he finally got a clue in the form of a knock at the front door. A careful glance through the peephole gave him a view of a fair-skinned, long-haired hippy-ish person, gems woven into their hair and clothes looking like upscaled thrift store rejects.

“What do you want?” he called through the door, not exactly eager to find out but unwilling to let them go without at least an idea of why they were after him.

“I’m a… friend of the family,” came the reply, a light tenor that could belong to either male or female. “I came to see how you were doing. It has been quite a long time since we first met, Richard.”

Rich blinked. There weren’t many people who he would call a friend of his family, and this person certainly wasn’t any of them. Their accent was odd as well, vaguely and generally European without being precisely from any region that he could pinpoint. He considered for a moment, but it was never a good idea to let a stranger into your home, especially if they were other-than-human and had unknown motives.

“Go away, I’m busy.” He turned away from the door, willing to call the matter done with. The wards scratched into the wood of his doorway along with those around all his windows should keep out almost anything, and those things that it couldn’t keep out wouldn’t have bothered knocking on the door.

“Why don’t you invite me in?” he heard through the door. “I promise that I mean you no harm, on my word and by the laws of hospitality.”

[i]Oh… fuck…[/i] Rich facepalmed, frustrated and furious. With that kind of pledge it could only be one of two things, and it wasn’t likely to be a vampire with the sun shining brightly outside. “One sec…”

He opened the door to let the fae in and checked the hallway for any bystanders before closing and locking it, then hurried to brew some tea and get out a few snacks. The few minutes of preparation gave him some time to think, mostly to wonder who he might have pissed off or trod on the toes of. The faeries, especially their nobility, were very touchy about honor and easily offended, but he couldn’t think of anything he might have done to offend one. That being the case, the fae might very well be telling the exact truth, though they most often skirted the edges of it and only very tentatively flirted with the actual truth.

Armed with food and drink to play at being a proper host, he returned to the living area to find his “guest” looking over his collection of electronics with interest but being very careful not to touch anything. There were many ways to break the laws of hospitality, and any fae who wasn’t after a fight would always be very careful to follow them to the letter.

“Would you like something to drink or eat?” Rich asked, and the being turned to face him with a wide smile, showing teeth that were most definitely sharper than a human’s and brushing back its hair to reveal the pointed ears that helped to mark its kind.

“Ah, I see you’ve been schooled in proper hospitality.” It took a cup of tea and a pair of cookies from the tray he carried, then sat itself on one end of his sofa, patting the space beside for him to join. “I would take it that you do not remember me, but then again you were barely born when we first met. You may call me Lord Angelmaris, Richard Gallian, and I have known your family for a very long time.”

Rich sat, both curious and wary, setting the tea tray on the coffee table in front of the couch. “You said you came to see how I was doing? My Lord, I don’t think anyone in my family ever told me about your… friendship.”

“Oh, I suspect they wouldn’t have.” The fae lord dipped a cookie into his tea and took his time eating the softened treat, keeping a sidelong eye on Rich as he did so. “You see, I performed a favor for your ancestors several generations past. It has come to pass that I am in need of recompense for that favor, and [i]you[/i], my dear boy, are the youngest of the line. As such, it falls to you to fulfill repayment.”

Rich narrowed his eyes and thought over everything that had been said so far. The fae had promised him no harm, and in those exact words, so it couldn’t hurt him without breaking the laws of hospitality and drawing down the wrath of whatever lord it reported to. However, should he agree to repayment without digging further into what price the lord required, it would be free to do as it wished with no repercussions.

“I would appreciate,” Rich began, careful of his own wording, “if you could explain what price you plan to extract. I don’t have much that I can give, but I am willing to negotiate a bargain that would be… equitable to both of us.”

“Ah, so cautious! Why, I promised you no harm, and I will offer you none, on pain of punishments greater than you could ever imagine. However, the Queen Titania has required my presence at the Great Hunt, and I find myself at a lack. I have to hand bow and quiver, sword and dagger, but the Queen is a great admirer of the ancient art of falconry. Alas! My favorite hawk has recently expired, through no fault of my own, I assure you, and I have only one recourse left me, as none of the lords or ladies will lend me a bird.”

“I… So… You just want me to… to hunt for you?” It was probably the simplest and least personally disastrous result that he could have asked for.

“Of course, my dear boy! Take to wing, down the prey, and return to hand. A simple enough price in return for a favor from a lord of the fae, would you not agree?”

His words cut off as a flash of heat raced through him, a familiar heat that he knew well from his favorite pastime. And he silently cursed himself for not having watched his words more closely. Never, [i]ever[/i] agree with a fae unless you were absolutely sure of what you were agreeing to. It wasn’t painful, as his transformations usually were. He could still hear the creak of bones shortening and hollowing, the pop of them realigning, the liquid gurgle of muscle and organs changing and repositioning themselves, but it was dulled down to more of an itch. Even the feathers that sprouted from his skin were more ticklish than anything else.

His body shrank as he lost mass, his chest pressing outwards as he gained a keel and flight muscles piled on top of it. His shoulders slid up along his back to meet nearly at his spine, fingers lengthening and growing flesh between to form wings. A hooked beak pressed out from his face, his eyes enlarging and growing sharp enough to spot a flea on a hare from half a mile in the air, his feet forming into gripping, killing talons.

At last, it was done and he struggled free of his shirt to screech outrage at the audacious fae. The lord had stuck to his word, giving neither harm nor any offense that could be voiced and yet had taken advantage of Rich in a way that easily broke the laws.

“Oh, my dear boy, don’t squawk at me like an offended hen,” the fae chided, eyes becoming slitted and golden, glowing with magical power. “What, did you think being wild touched made you ‘free as a bird?’ Everything has its price, and your freedom is the payment. I gave your kindred wings so long ago on the agreement that they would fly to hand when called, and I am calling.”

Rich wanted to fly at the being’s face, to claw and bite and rake out those felinoid eyes, but found himself instead awkwardly talon-walking across the cushions to climb onto the outstretched arm. He couldn’t even offer a shriek of complaint when a leather hood was slipped over his eyes and tied off.

“Now, it wouldn’t do to have you sneakily slipping any unwarranted whispers of trickery into the Queen’s ear nor any of my fellow lords and ladies. I think I’ll leave you just enough of a mind to be the best hunter on the field, but you won’t have any further need for words, not even to think in them. All you need do is obey me, and I will ensure that you have a very pampered life.”

[i]No harm my feathered ass,[/i] was Richard’s last coherent thought, and the last he might ever had, leaving him only with an impotent feeling of rage and regret as the fae formed a portal to its native realms and stepped through.

A Price For Everything

Richard has an unexpected guest...