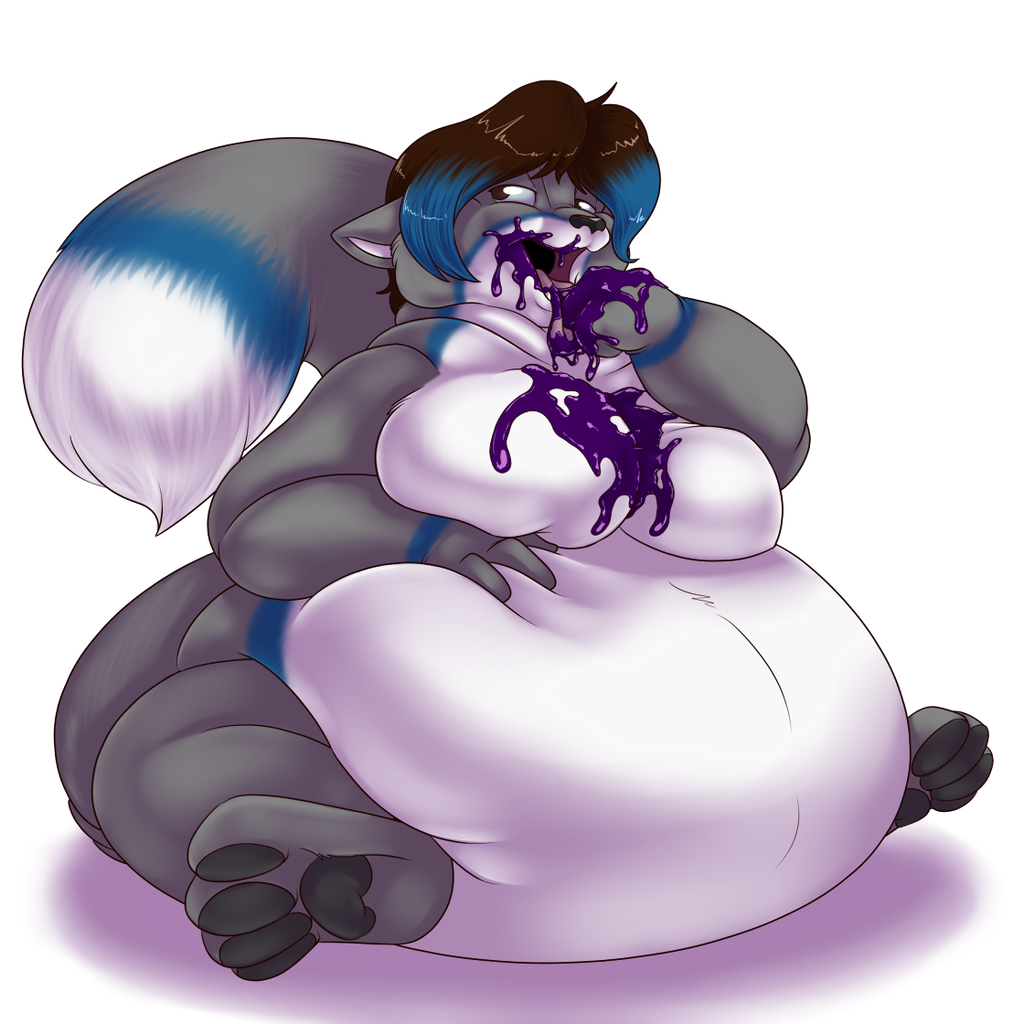 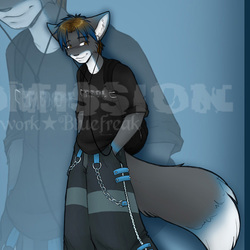 So! Y'all have been waiting so patiently for the next part of Nano T, so here it is! This'll also give some hints as to what other stories I'm gonna do for this series to finish it off. Meanwhile, enjoy a positively plump, goo-filled Ark enjoying his fresh, fruity discovery, and a story to boot!

The lab was ablaze with purifying white lights, bathing the room with the cool glow. The solid white floors were thick and heavy, but still couldn't resist the lights as they reflected outwards. The room was dotted with spots of sand, seeming to be in large rings around the room. This square room only had one small window, mirrored as it added to the bright reflection, centered on one object. The object seemed to be sitting directly on the floor. It was large, round, and unnervingly fluffy.

The tail swung back and forth, sweeping the sandy floor with his white tip while the blue ring rippled. Equally moving was an oversized belly, resting against the floor, swollen outward between his thick thighs. His ass was immense, giving plenty of pudgy padding, much like his large paws. That chest was swollen too, making it more than easy to confuse the creature for a female. However, the face was unmistakable. The face was all over the news. The city was nearly destroyed thanks to an escaped bioweapon, but a single person had encountered the weapon, fought to control it, and had settled down to rest. This swollen creature had restrained this tool, and it was now a part of him.

This creature was Ark.

'Alrighty, subject X-489g, Akkeresu Alsea Daikon. Nicknamed "Ark". Network engineer, athletic professional, and multimedia specialist.' A hidden loudspeaker sounds off into the room. It sounds like the scientists are explaining this situation to some officials.

'He has encountered TS-1, a supposedly lethal bioweapon, contracted by an unknown government and developed by TSTech Nanoengineering Corporation. Instead of that weapon consuming the city, he alone, managed to get the creature inside of his body, only destroy a few small houses and storage facilities, and neutralize its' mechanisms.'

Ark was settled back into his own thick, fat body. His eyes were closed, hands resting on his swollen chest as he listens to the explanation of what he already knows. He was a lot more comfortable with the body he now had, but he was still getting used to the excess size. A lithe, 150 lbs runner, he was not, at least anymore. His 400 lbs body was thick and heavy, keeping him in place easily.

/Akkeresu! Please explain, in your own words, a general timeline of what had happened, starting with the night when you were infected./ This time, it was the executive speaking, a much deeper voice booming outwards. Ark's eyes flitted open, giving off a chirp as he looks at the mirror. He grins.

"Sure! Easy enough. So, it was a dark and stormy night. I came home from work, it was New Year's Eve. Heard something odd, didn't think much of it, had a shower, and that's when it flung out at me. Then it. It got inside me, filled me up like a it was a garden hose. After that, I had blacked out. I woke up the next day, was swollen up, like I was pregnant. Um, I had...ah..."

"I do realize this is being recor-" Ark is cut off as he leans back.

'Don't worry about explicit content. Every little bit helps us figure out how this thing works.'

"Well, okay...I jacked off. After that, I went back to sleep, and when I woke up, I was about 25ft. tall. It was all a blur...my vision was tinted purple, I couldn't control my actions...I was screaming in pain, but at some point, I realized I was hurting people, and I stopped."

The scientist whispers to the official. 'He thankfully didn't hurt anyone, the scream alerted everyone. We also launched a stabilizer from a nearby helicopter that locked the biomass down and allowed us to bring him in. Still made a freaking mess. It unfortunately decompressed the goo after some time, hence his swollen state'

"I got control back, sat down in the street, and then was really sleepy. I woke up...groggily...in this room, but I was about...two, maybe three times bigger? I felt like one of those fat documentary folks. Just couldn't move. Was super sleepy most of the time. But, I've been getting smaller. Still can't move easily, but at least I haven't been hungry! How many days has it been?"

'About 4, Ark. So, it sounds like your hormones gave the weapon something to lock onto and the endorphins caused an outflow. After the stabilizer was applied, it settled down, and you were able to regain control and sit.'

"Ah! Well, what's your intent of me now that my house is destroyed and my body is all jacked up? I mean, shit, work's pro'lly been calling me constantly." Ark seems a bit irritated now, sitting up and swinging his tail back and forth as he stares into the mirror.

The researcher opened up the side of the mirror, allowing two-way viewing. The main suit and scientist are up front, along with about 4 additional of each, taking notes or watching. Ark gets a good look at the labcoat and the suit. The suit doesn't seem to be much. Just a man in a suit. Same with the lead scientist.

'We hope to be able to release you soon. We just don't know how that goo inside you is going to react, but we've noticed that you no longer have organs. No respiratory, no digestive system, no CNS...but oddly, your body still responds like it has a CNS, muscles, skeleton, and so on...see for your self.'

"Wait, really...how's that possible." He starts as the labcoated voice finished. "Okay, um..." Ark grabs his index finger, gives it a tug, and listens. The joint pops, then there's a slight struggle. Ark closes his eyes, pulls harder, and his finger slowly lengthens like a plastic tube! First inches, then more, then a foot long finger is being held by the catox, still flexing across all of his joints.

The coat speaks. 'Right, just like that. See if you can pull it back in.'

The hybrid closes his eyes, focuses and slides that finger right back in, letting it snap with a pudgy pop.

The suit speaks, seeming to not pay attention to the catox. /We've already talked with the contractor. They supplied that stabilizer, but we will be monitoring any further activity related to their research. Also, any findings we locate with your body will help us get you back to normal. Meanwhile, we'll help you recover your assets and repair any damage, or get you relocated soon. Your job has already been notified, and you will retain your position. We'll have a cover story ready for you. You will need to.../

Akkeresu was listening to the suit as he played with his hand. Eventually, he tuned him out for a moment. What exactly was this body capable of, between being 25ft. tall, fattened up to half a ton, and malleable like a Stretch Armstrong? The hybrid thinks for a moment, taking that same finger, then tying it in a knot. Then undoes it. Ark pauses then gives himself one more pop with with his fist, cracking all of those knuckles at once. With another push, his skin seems to rupture, dark purple gel spilling out of the pseudo-wound.

The other scientists rapidly step back, some of them running from the observatory. Those wounds seal up, but as that goo runs along his chest, but instead of just dripping around, it seems to multiply, slowly gaining surface area across the white fuzz. Ark gathers some of it in his paw. Is this really what he had become? Just a huge bag of goo? Then how was he still alive?