Oh no, Minerva by Amelia-Skunk

Jimmy, was just a man who never believed in treated women with any respect. He would, tell his girlfriends that they were no good and he could do better. Also, Jimmy always say to himself he was the most handsome man in entire world, but that would soon change. Sitting, at table in a burger joint eating a double cheese bacon burger with a small root beer for a drink. Suddenly, a good looking girl happened to walk by the table he was sitting at.

Jimmy, got up, held the girl’s hand, and asked her out on date. The girl, thinked for a minute about going on a date with some random guy that she barely even knows. Kindly, she accepted the date and sat at his table with him. Jimmy, sat back in his seat, and began talking about how good he looked. The girl, asked if she looked pretty, but Jimmy cared too much about his looks to even care about how is lady friend looked.

The waitress, walked over to them and asked the girl what she was going to have. She told, the waitress that she would just have a chef salad and a nice iced tea. Jimmy, then asked the waitress how he looked to her. She just, ignored him and walked off to get his lady friend her order. Jimmy, then told Lacey that he would get her a mink fur coat, but she told him that she didn’t wear stuff made from animal fur.

He just, told her that the animal was dead so she, didn’t have to worry about it. Lacey, soon realize how selfish he was by not understanding why she didn’t like wearing animal fur. In her, eyes it was wrong to kill animals just for their fur. When, the waitress brought over Lacey’s salad she just, dumped the bowel on Jimmy’s head and saying good-bye to him after paying for her salad. Lacey replied as she was storming off in a hurry, “You know, I wish you could see what it’s like to be a women and to be a mink with hunters wanting your fur all the time. Maybe, you should keep your good looks so men would be all over you like you were with me!”

Finally, she left the burger joint leaving Jimmy alone, but a strange old lady overheard Lacey wishing that Jimmy could be a female mink. As Jimmy, got up to leave the strange old lady grabbed his left wrist cursing him, “You’ll, soon learn the meaning of respect for girls and animals.”

Quickly, Jimmy pulled his wrist from the lady’s hand and told her not to touch him ever again. Soon, as he left, Jimmy started to feel like his inside were burning up. He rushed, into the men’s bathroom because he thought he was going to be sick, but instead he just sneezed. When, got a good look in the mirror he noticed his nice short black hair was getting longer and it was starting to turned light blonde. His heart, began pounding against his chest rapidly, he opened his mouth to ask himself, “Why did my... Ah! My voice I sound like a girl!”

Quickly, white fur began covering his face as his body began taking on a feminine shape. Slowly, his body became less masculine and became more feminine. Hoping, this was just a dream that he was transforming into a girl, but he felt his body starting taking on more feminine proportions. His hips, became more curvier and his arms were now slendered and elegant as white fur covered his arms, hands, and fingers. Next, his ears grew to the top of his head as they became “floppy” as white fur began to cover them.

From his, face to his fingertips including his chest was covered in white fur. Then he could feel the shape of his skull rearranging as he felt a small muzzle pushing out with his nose turning into small pink triangular and round nose. As he, got a good look in the mirror a perfect reflection of Minerva Mink was shown. He was, now just missing the female parts, but they would soon come. Suddenly, Jimmy’s chest felt like it was getting heavier, but when he grabbed his chest he could feel that his breasts were getting bigger they grew to a DD size.

Then Jimmy, felt a burning sensation around his manhood. He could, feel it slowly sucking back into him as he was left with nothing, but a pussy. Not wanting, to admit that he was turning into a female mink he could feel his anatomy changing to that met for a girl. After, a sharp pain shot down her spine as a big light blonde fluffy grew from his tailbone. Jimmy’s heart, began pounding against her chest still trying to fight the truth that she was now a female mink that looked like Minerva Mink.

The clothes, she had on felt a little too big on her, but the lady’s magic turned her shirt into a light blue strapless shirt and her nice black jeans turned into a dark purple skirt. Suddenly, she began to like how her new clothes looked and fit. Then, Jimmy, began having these strong headaches which indicated that Minerva wanted to take over her mind and not just Jimmy’s body. Fighting, to stay in control of her own mind Jimmy began to worry that she wasn’t wearing any eye shadow, but she didn’t have any on her. That was, when she was going to head to the make-up store across the street.

Quickly, she opened the bathroom door some, poked her out to see if anyone was watching, and she quickly ran out of the bathroom to the front doors. Finally, making it out of the burger place quickly she rushed over to the make-up store to buy some blue eye shadow, red fingernail polish, and other beauty supplies. Then, she felt her toes starting to merge together leaving her with only three toes on each foot. Slowly, she began to lose memories of ever being a male, but she still knew her name was Jimmy and she used to be human. That, started to change soon she began losing memories that she was ever human and always remembered that she always has been a mink named Minerva Mink.

After, buying her new beauty supplies she quickly rushed back to her home where Jimmy’s home was turned into Minerva Mink’s home including everything inside. As she, entered her home she began thinking about a dreamy guy that she saw on her way home. Quickly, she pulled up a chair to her mirror, and began fixing her beauty issues. First, Minerva applied light blue eyeshadow to both eyes. After, applying her make-up she began brushing her hair and tail.

Next, after she was done brushing her tail and hair, she began painting her toenails, and fingernails red. Finally, she was done with that took off her current clothes and put on a bright red dress. Saying, to herself, “You can’t beat, a pretty red dress.” 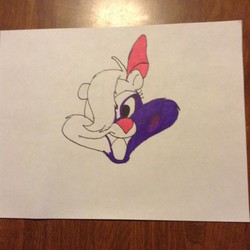 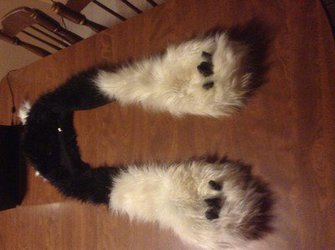 Enjoy, a story about a man turning into a female mink.