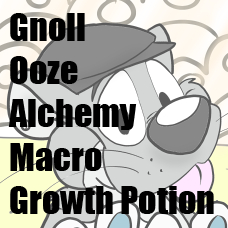 Alkali carefully, gingerly tipped a test tube until the single drop of bright green liquid dripped into a beaker. This reagent needed to be measured extremely carefully. Drops worth, and not a milliliter more. Concentrated potions like this Elixer of Enlargement had many uses for an alchemist in a hurry but could be very volatile. The gnoll stuck his tongue out, focusing on the tilt of the test rube with trembling fingers. One more drop was all he’d need-

“Happy Macro March, Al!” a voice called as the door to Alkali’s potion shop opened. The sudden shout caused Al to yelp. He fumbled the test tube between shaky hands, catching it just moments before it shattered on the wooden benchtop. Gently, very carefully, he placed the tube into a carved wooden rack and replaced the stopper. Okay. Now it was safe.

The gnoll breathed a sigh of relief, turning away from his components table to see who’d entered. There was no one on the other side of the counter at first glance. Al raised an eyebrow, looking through the seemingly empty store. A soft ‘ahem’ drew the alchemist’s attention downward, to the ooze standing just below the level of Al’s store countertop.

Din smiled nice and wide, with no eyes to speak of on the green ooze’s face but still expressive enough to see the gleeful emotions beneath. “Hello Al! I brought back more components to experiment with. It’s Macro March so I found mushrooms and Enlarge Person-”

“Oh, Din, it’s you,” Al muttered. He ruffled the pointy hat atop their head. “Be careful next time. You must always knock before entering another alchemist’s work space.”

They paused to consider this for a moment, putting a gloved hand onto their amorphous chin. “Right. I’ll be careful, sorry Al. If you’re going to be dropping growth potions, it should be on purpose, not by accident.”

“Exactly. Experiments with dangerously concentrated growth potions should be intentional-” Al started before sputtering out halfway through. He adjusted the tiny glasses on his muzzle, pushing them up closer to his eyes. “Well, what I mean is, that’s not the lesson to take out of this Din. Y’see-”

“Oh! Right, that’s what I was doing before you arrived. Some Macro March experimentation of my own,” the gnoll said, directing Din’s gaze to the green liquid inside the ‘Elixer of Enlargement’ tube. It glowed slightly giving the components table an eerie emerald tint. The script on that label must’ve been hand-made, with beautifully flowing penwork detailing the chemical properties, safety warnings. It was fascinating. The ooze couldn’t help but stare. Before Din knew it, they’d been staring at the tube for a full minute without listening to Alkali.

“…and that’s why you need to be careful with it. Do you know how to make an Enlarge Person potion using the concentrate? I could let you practice with my components,” Al finished, looking down at Din expectantly. The ooze gave a confident thumbs up. They hadn’t heard a single word of the gnoll’s instruction, but that was fine. They were sure that the details would be easy to pick up while synthesizing the potion.

Alkali trusted the little ooze, even if they didn’t have as much experience yet. That sort of thing could come with time and practice… and probably some transformative mishaps. He opened the area behind his shop counter and Din slithered over the wooden floor to the components table. Al nodded his head appreciatively; Din’s body completely cleaned and dusted his floor anywhere they creeped. One less task for the day.

The ooze slid right up the nearest wall and landed with a light ‘splat’ on top of the components table. They deformed slightly on impact, settling into a ball before their limbs and head reformed into a bipedal position. Din reached inside their chest to pull the pointy wizard’s hat out; it hadn’t quite settled in the proper place when reforming. Setting it atop their head, they went to work brewing a potion per Alkali’s recipe.

What Din lacked in experience they more than made up for in desire to help friends. They didn’t want to let Al down. There were lots of complicated instructions written in flowing, flowery language across the delicate spellbook’s pages. But the most Din understood out of it was generally ‘add ingredient X to ingredient Y, mix together and bottle’. The ooze shrugged. It would be easier to learn as they went. They started dumping test tubes and herbs into a beaker, turning up a gas burner beneath the glass to boil the liquid. It slowly congealed before flashing bright green. According to the recipe this was the most important part. Now they needed the Elixer of Enlargement to complete the synthesis and imbue it with magick.

Din dumped half the elixir in and watched a sparkling reaction explode within their brewing liquid. “Done!” they exclaimed, lifting a bottled potion into an awaiting gnoll paw.

Al’s nose turned up in disgust the second he smelled the slight scent of burning hair that emanated from the bottle… but he didn’t want to insult the helpful little ooze. Besides, how would they learn without experimentation? The gnoll wouldn’t deprive Din the chance to learn.

“Bottom’s up,” he mumbled with a half-hearted smile. The taste was… somehow just as bad as the scent. Al wasn’t sure how, but the green liquid tasted like burning fur too. He was half tempted to search the empty bottle for traces of gnoll fur on the off chance something contaminated it. Gulping the potion didn’t remove the flavor from his mouth either; it lingered on the tongue, popping slightly as if tiny bubbles covered his tastebuds.

“That is… a fascinatingly bad taste,” Al said, gagging slightly. But seeing Din look up, awaiting feedback like a patient student, froze any further criticism on Alkali’s lips. Swallowing as best he could, Al gave a thumbs up and a pained smile.

The gnoll’s stomach began to gurgle as the potion kicked in. His whole body expanded in a dramatic burst, tearing the gnoll’s breastplate and pants off with enough force to send the shreds tumbling to the floor. He was forced to take a seat as his head bonked into the ceiling with enough force to crack the wooden ceiling beams. Al placed a chunky hand on the ceiling to brace himself, looking down at Din over his comically tiny glasses resting at the base of his snout.

“Din. What concentration and release time did you use for that Enlarge Person potion?”

“…Oh, uh. Lots of concentration! I was super concentrated on making it for you,” they replied. Din seemed just as surprised as Alkali; that potion worked much better than expected! Maybe the next batch could be a little less sudden though.

Alkali could feel the potion still gurgling in his stomach, and made an educated guess that his growth was nowhere close to being done. The once-spacious potion shop was filled to the brim with the bottom heavy gnoll’s bulk after another burst of size. He felt glass bottles shatter under his butt, the ceiling creak and crack, and a small ‘splat’ from Din being pressed up against the far wall by Al’s tummy.

“One second Din, just hold on. We’ll be out soon,” Al growled through gritted fangs. He turned around inside the room, paying no attention to the crunches of more furniture and alchemical reagents. This was no time for delicacy; he needed to get out before he ruined the entire shop from the inside. Once he faced the doorway, Al crawled forward as best he could manage. Already his shoulders were cracking beams of the ceiling with each movement, and the way his belly dragged across the floor pushed his backside up into the second floor of the shop. The exit was within reach-

When Alkali felt his stomach gurgle this time, it shook his poor potion shop to the building’s foundations. Suddenly he found his face rammed up against the wall, practically grown straight through it. His muzzle had pushed free of the doorway, knocking the entrance nearly off its hinges. Both paws were pressed against the windows on either side of the door. No, scratch that, his right paw had just crashed through the fragile glass. He wasn’t sure how bad the damage was from the backside of the house yet but he had a sneaking suspicion it wouldn’t be cheap to fix. Luckily for the gnoll, the way the walls framed his muzzle hid the blush on his cheeks.

Regardless of his enjoyment, Al knew he needed to pull himself free. It was now, or never. He gritted his teeth to focus on the task at hand. The gnoll mage pulled himself free of the debris of his shop, brushing wood off his shoulder. Saving the shop was a foregone conclusion by now. Better to just get out of the wreckage and be done with it.

So, the growth was finished for now. That was a relief. Al sighed, scattering birds off the next-door shop’s roof with the force of his breath. First, he’d find Din and make sure they were okay. Then… well he wasn’t sure what step two would be. Probably finding a counterspell or waiting for the Enlarge Person to wear off.

Din climbed onto the gnoll’s muzzle, staring down at gnoll eyes just as tall as the ooze. Din apparently pulled themself together in the interim. Alkali blinked in surprise. He hadn’t realized how resilient the ooze could be.

“Hang on, I figured out what I did wrong the first time. Let me fix this,” Din muttered to themself. Pulling a bottle free from an adventurer’s pack, they pulled a stopper free and dumped the contents all across Al’s muzzle. The gnoll’s muzzle split open in a grin; he recognized that familiar green glow.

“This Macro March is gonna be great, I have so many Enlarge Person potions to test!” Din said. 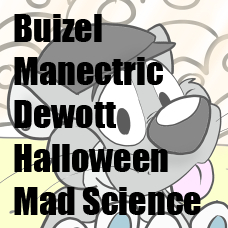 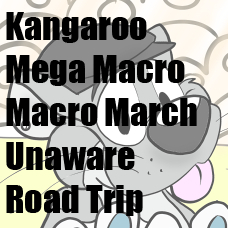 Here's the full Macro March story for Buck! The previous snippets in the art description came from here if you want to read the entire thing.

Thank you again for the fantastic art, and I hope you like the story ^^

You can check out Bucky's art here, along with the cute ooze mage Din. https://twitter.com/buckdasystem