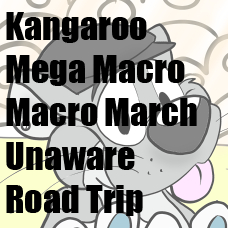 Quinn nodded gravely. Or as gravely as a millimeter tall roocoon could manage, because being this small made it hard to show facial expressions. “I saw it myself, sir. He’s like, WAY bigger now.”

The kangaroo scientist put his head in his hands. “That isn’t even a real measurement. How can you be sure? He was already miles tall. Not one mile. Miles.”

“Yes, but now he’s a MegaMarsupialMeter tall. When I became a tinyroo, it made Brang growsplode. Just- You gotta come help me measure so we know exactly how big,” Quinn explained again. The roocoon tapped his paw on the lab floor impatiently. Al reached a hand down to give the millimeter tall boomer a lift, setting him on a shoulder.

“Okayyy let’s go then,” Alkali sighed. He swapped the lab coat for a jacket on their way out the door into brisk early Spring air, headed toward the car parked on the street. None of what Quinn said made sense but crazier things had happened in Macro March. Brang was already a mega-sized kangaroo so he didn’t understand what the fuss would be about. Whether he was 80 feet tall or 80 miles tall, Brang was a roo to be reckoned with that could crush entire cities with ease.

When Al looked to the horizon, he realized what Quinn meant by ‘bigger’. This was on an entirely different scale from before. Brang was laying down, that much was obvious. But the wall of leathery kangaroo soles that filled the horizon from end to end made it clear there was much more roo on the other end of that paw. He traced the marsupial’s paw up into the air, gulping when he saw airplanes swerving to avoid Brang.

“We’re on the south end of Wisconsin, right? Start driving north. We can use your car to measure the distance it takes to get from one end of Brang to the other,” Quinn started. He hopped off Alkali’s shoulder and into the passenger’s seat of the sedan. “I’m only a millimeter tall. So, I need some help measuring THAT.” To press his point home Quinn gestured at the kangaroo paw currently grinding a canyon through downtown Milwaukee. Brang must be having a good dream.

“R-Right. Let’s get going. This might take a while, even with my car,” Alkali muttered as he turned the ignition.

An hour later, Alkali understood the depth of the task he’d undertaken. Driving full speed on the highway he’d barely managed to get past Brang’s ankles. Checking the odometer confirmed the roo’s suspicions. About 70 miles of driving, and they were still not even close to being done.

“You don’t have any plans today, right Quinn?”

The roocoon shrugged and crossed his arms behind his head, barely visible within the black fabric of the passenger’s seat. “Where else am I gonna go? I can’t exactly get around at this size.”

“Well at least snap in, it’s not safe to drive without a safety belt on.”

“…you’re kidding me, right? How exactly am I supposed to do that from down here? Just put me in your pocket. I’ll be way safer there. And turn on the radio, we’ve gotta sing along to every song!”

“621 miles… we drove from one end of the roo to the other, and it took an entire day. Ten hours, Quinn. Really, MORE than ten hours with the breaks we needed for food and gas,” Alkali said breathlessly. He was having trouble believing it himself. Thank goodness Brang was a deep sleeper and hadn’t moved too many times.

Except the one tail thump he felt a few hours ago. They’d been clear of the roo’s tail for a long time by then, and good thing too. That thumping, 200-mile-long tail liquified the bedrock beneath it. Even at a distance, Brang quaked the ground under Al’s car like an atom bomb going off. Al reached over to flip the radio off just as the announcer finished describing the ongoing evacuations of… well, pretty much everyone. Wisconsin and Minnesota were the most obvious ones, since they held the majority of megaroo bulk at the moment. But as worried as he was about that, Al needed to focus on what to do about Brang first.

“Told you he was a MegaMarsupialMeter tall. 1000 kilometers. And youuuu didn’t believe me,” Quinn said teasingly from his perch on Alkali’s hat.

“This is entirely too much roo, as much as I hate to admit it,” Alkali said soberly.

“What do you want to do about it? What can we do?” Quinn asked. The scientist didn’t get an opportunity to answer. The ground shuddered, and this time not from the rhythmic quaking of the kangaroo’s heartbeat pulsing through the continent. Brang’s eyes opened, and with growing horror Alkali watched those green eyes focus on their car. There was no mistaking it: Brang knew exactly where they were.

The megaroo rumbled as his hand rose above their entire zip code, miles of roo paw suddenly casting the ground in shadow for as far as Alkali could see. “MINE,” Brang rumbled. The roo grabbed not just the car, but the road around it and several square miles of land too.

Brang could sense a Quinn in that little speck of car on his palm. Their sizes were linked through, as Quinn put it, 'goofy ass marsupial magick'. The roo knew exactly where Quinn was at any time, if he’d become lost in fur again. But what he didn’t know was how Quinn managed to get a car that tiny. He snorted, dispersing clouds that floated lazily past his muzzle.

“Got a new car to get around with, down there?” he boomed. Brang didn’t wait for a response though; it was completely dark outside, and he needed to figure out where he’d fallen asleep. The megaroo rose on thick haunches, balancing himself with a tail thoom.

“What happened anyway…? Don’t really remember falling asleep out here,” he said, strolling over the landscape. With a shrug he turned his hand over, letting the speck of dirt fall onto the top of his muzzle. There, safe and sound. At least now he could see the car’s light while trying to figure out where he is. The roo started to explore the landscape, stomping forward to find the nearest city and drop Quinn off.

Alkali screamed as Brang dropped his car unceremoniously off his palm. It was like being dropped off a planet, the ground suddenly falling away from both his car… and the road beneath it too. The remaining land Brang grabbed was falling apart, crumbling into enormous boulders before landing harmlessly across the rainforest of brown roo fur. Quinn held tight to Alkali’s hat; better to be tumbling through the air on someone larger than alone.

The car crashed into a strand of fur thicker than a redwood tree, smashed to pieces. It sat in a heap, smoldering slightly against the foreign surface of the skin on Brang’s muzzle. Moments passed before the driver’s side door burst open. Alkali’s foot kicked the door rather than use the handle. Coughing and sputtering, the kangaroo escaped the car dazed but unharmed.

“That seems wildly unlikely,” Alkali said, looking over his shoulder at the wreckage of his old ToyOttah sedan.

Alkali was about to ask what that actually meant when the ground shuddered beneath him. The vibrations traveled through his entire body, trembling to the bone. That was from a single Brang step. The megaroo was starting to walk. The scientist’s eyes widened in horror, realizing the chaos a marsupial this size could cause.

“Oh. Ooohhh no, WAIT! BRANG! YOU CAN’T START WALKING AWAY AT THIS SIZE BUDDY-” Alkali yelled, cupping both hands around his mouth like a megaphone.

“You know he can’t hear you, why are you shouting?” Quinn said. “Just give him a moment and he’ll figure it out.”

“Yeah, but not before stepping on multiple states between here and the ocean first…”

“Hang on… is that… the sunrise?” Brang asked his little roocoon passenger. The question wasn’t really necessary, and he couldn’t hear Quinn’s answer regardless. He knew that wasn’t a sunrise; that meant he’d walked all the way across the continent, and was seeing the sun over the horizon. In the span of a few steps he’d been traveling between time zones.

The megaroo froze, doing some quick mental math. With the distance he’d traveled since waking up, seeing the sun again shouldn’t be possible. Unless… he’d grown MUCH larger. Say, around a thousand kilometers. Suddenly all the strange details since waking up clicked into place. He hadn’t seen any cities for a while because they were all the way down at… or under his toes. The roo snorted, slowly shrinking himself back to a more managable size. Something he was more used to for Macro March.

He slowed down around half of a kilometer, gauging himself against a skyscraper until it was perfectly sized to fit beneath the full length of one of his thumpers. Satisfied, the roo rumbled and settled in amongst the ruins of what remained of a city destroyed mere moments ago by a single kangaroo toe.

“Did you feel that just now?” Quinn asked, his long ears twitching like antennae. “I think Brang just shrank back to normal size.”

Alkali paused, looking around expectantly. Nothing looked different though. The car was still ruined, and the forest of fur still stood out just as massive. He turned around and shrugged. “Are you sure? Seems like nothing changed to me.”

“Exactly. Because we shrank with him too,” Quinn said matter-of-factly.

The kangaroo scientist chuckled awkwardly. “That’s… well, we can figure that out too,” Alkali said, unconvincingly. “How much did we shrink? As long as I’m still measured in inches.”

The roocoon hummed, licking a finger and holding it up in the air to test the wind. He was silent for a moment, thinking hard, before nodding authoritatively. “We went from a MegaMarsupialMeter tall to about 500 meters. So that would make it… nope. No way I can do that math in my head. I have no idea how I even know those numbers! Weird size linking magick!” Quinn said, making spooky ghost sounds.

Al rolled his eyes. “Okay, that’s… a difference of… what’s 500 meters divided by 1000 kilometers? About 0.05 percent,” Alkali said triumphantly after some mental math. The roo’s look of success turned just as quickly into a desperate realization. 0.05%. That meant he’d shrank from 6 feet tall to just over 3 inches tall. Gulp. Well, his wish came true. He could still be measured in inches if only barely.

“Better get comfy Al. We’ll be on Brang for a while, I think. Assuming he even knows you’re here at all. THAT could be dangerous. You might get left behind if the roo plucks me out of here! Wouldn’t THAT be AWFUL, Al?”

The kangaroo didn’t answer; he just whined, looking up at the sky of brown fur looming above. 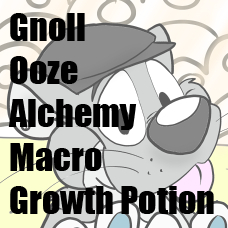 Another Macro March gift, this time for the best green dragon, Tyrnn and his kangaroo character Brang!

Also featuring me, and Quinn, as the hapless micros on a mission to measure this marsupial's size.