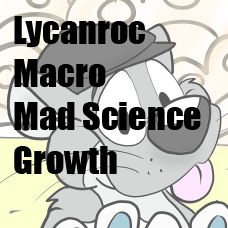 “So all you have to do is stand right there and… that’s it. Don’t move. That’s all.”

The Dewott scientist wasn’t kidding. This would be the simplest experiment Alkali had devised to date; it literally just required a Lycanroc test subject, a wall to floor window, and a full moon. The window part was easy to fabricate with the support of his far-too-many macro test subjects.

The Lycanroc test subject part was only slightly harder to find. Alkali could’ve filled in himself, but then there would be no one else to take observations down or to open the window. Fortunately, Halloween was right around the corner. There were Lycanrocs galore to find as volunteers. With a few promises of ‘life changing results’ Alkali had convinced a Midnight form Lycanroc named Matt to help with the test.

Matt rubbed a hand on the back of his neck, looking around the room nervously. He wasn’t always a Lycanroc but October was a great time to use it. Most of the time he used a Pikachu form, and he wasn’t sure if that would mess up anything this scientist wanted to test. He was tempted to mention it but… decided that Alkali was the expert here. If anything about this was unsafe, Matt was certain the maniacally cackling Dewott would do the right thing and stop the experiment.

“I just stand right here?” Matt asked to confirm, looking down at the ominous bullseye painted onto the floor under his paws.

“Yup, you’re a quick learner. Now HANG ON TIGHT,” Alkali said as he threw an oversized switch. The entire space of the lab sparked and coursed with electricity, giving the room an eerie blue glow. It was all entirely for show of course, but it was important to keep up appearances as a mad scientist. “MUAHAHAHAHA! IT BEGINS!” the Dewott bellowed as a simple rope pulled the blinds up from the window, shining moonlight directly onto the bullseye and its intended Lycanroc target.

Matt looked up at the moonlight, flinching as if awaiting a massive growth spurt. A moment later when nothing happened, he relaxed with a sigh. “For a second with all the electricity, I thought you were going to- URK.”

The Lycanroc shuddered violently and the moon stone around Matt’s neck heated up. Clearly, he wasn’t out of the woods yet for this experiment. The vest, shirt, and jeans combo he’d walked in with suddenly felt tighter across his body, but they stretched as Matt bulked up to keep pace. The roof though was another matter. It could not stretch; it instead cracked when Matt’s head impacted it 20 feet up in the air. Both of them knew that was a bad sign, but rather than help Alkali instead slammed a large, circular, red button on the wall. Klaxons suddenly filled the air as the multistory facility went into lockdown. It was too late to evacuate fully before Matt found himself hunched over on hands and knees, still rapidly growing to fill Alkali’s lab. But at least this way everyone would get out of the way as a Lycanroc grew straight through floor after floor of concrete.

Finally reaching the top floor, Matt pushed his arms through the ceiling and popped the roof free entirely. “Whoops,” he boomed, before tossing it to the ground and stepping free of the building. He hadn’t stopped growing yet from moonlight exposure, so he knew better than to stay standing there and destroy more of the labs.

Buizilla looked down from the top floor of the labs, through the center of the hole, down to Alkali on the ground floor. He did not look pleased. “So… I assume that one’s yours?” Buizilla asked, crossing his arms and tapping a foot. Alkali started to reply, but he knew there was no denying it. Better go alert the insurance company. 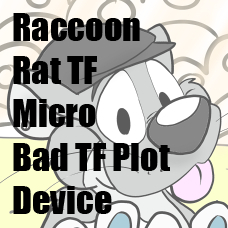 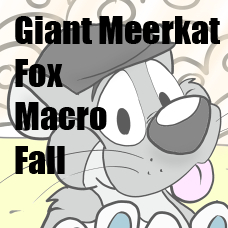 MAD SCIENCE
GROWING LYCANROCS
What more could a warmup story really need? This one including MattMacroPika's Lycanroc character!