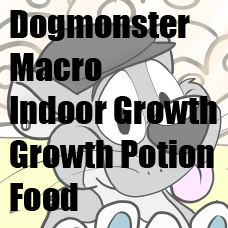 The green liquid sloshed around in a vial as Dael shook it between thumb and pointer finger. The contents glowed like a cartoonish, radioactive sludge but it had the thickness of syrup. He scowled at the vial. Should he believe the vial’s instructions, or not? There wasn’t much detail to go off. The thin writing merely said ‘Apply to your food for immediate size increase.’ No one bothered to sign the instructions, nor to put a return address on the envelope it came in. Which brought Dael right back to the original question: should he trust such a shady gift’s instructions? The dogmonster puzzled over his conundrum and scratched at his brown chin fur, deep in thought.

“One way to find out…” he mumbled, looking back at his kitchen table. In a cardboard delivery box sat a pizza, warm and awaiting its delicious fate in his mouth. He licked his lips, prepping for a tasty dinner. First though the vial needed to be tested. He popped the lid off and let a tiny drop stain the warm cheese. Nothing happened for a minute, then for two minutes. Dael was about to give up and declare the glowing goop fake when he noticed the slice of pizza vibrate slightly. It wasn’t immediately clear what was happening until with an audible pop, the pizza doubled in size within the blink of an eye.

Dael gasped, eyes widening with realization. It was real. Then the dogmonster started to squeal lightly. Al had actually sent him a real growth potion. Dael’s tail wagged with such ferocity that he could’ve been mistaken for a particularly fluffy electric fan. This opened up all sorts of possibilities. An hour ago, he would never have assumed this could be possible. But he couldn’t deny the evidence right in front of his eyes. That meant maybe if it worked on food, it could work on him too. The hungry monster picked up his dinner and without another word…

He’d already started to munch away at the extra-large slice of pizza. There was no real way to avoid it now; Dael’s mind was completely made up. He would eat that entire pizza, and all the serum along with it. He poured the rest of the potion onto the food with his free hand. Each piece popped into its larger size, in order. It completely filled the cardboard box and spilled off onto the table too. Less than an hour later, and the pizza was completely devoured.

The bulky fur let loose a belch as he collapsed into the couch, warm and full and content. Now that he’d enjoyed his dinner it was time to rest for the evening with some video games. There wouldn’t be much more productivity tonight after a meal that size. His stomach growled at him, rumbling slightly beneath the green shirt. Dael scowled at it between sessions of his game, unsure why this pizza in particular would get his stomach gurgling. It wasn’t much more pizza than he usually ate, and it tasted just fine…

The sides of his shirt suddenly ripped away. Dael only had a moment to process this before the game controller was crushed in his hands too. “What the-”

The button on his pants flew off into the distance and the zipper tore apart from the strain of holding in a growing, tubby, gurgling Dael gut. Apparently he was cursed so that none of his clothes were going to fit in a few short moments. Dael wasn’t really a scientist like Alkali, but even he could take a guess at what was happening. That food spiked with the growth potion… it wasn’t finished working yet. And instead of growing the food, it was growing him!

He stood off the couch, trying to regain his bearings, but only succeeded in shredding the remains of his clothes off his body. Dael hunched over as his head bumped forcefully into the ceiling, leaving splinters and cracks that traced all across the roof. The dogmonster winced in pain, and fell to his hands and knees. His leg turned the couch into rubble in an instant and his tail snaked through the room behind as even while crouched the fur was rapidly approaching the full capacity of his house’s first floor. But that wasn’t going to be the end of it; even after that growth spurt, his heavy gut gurgled anew. The bulky, chubby Dael gulped audibly as he felt the warmth spread from his belly out to his appendages, expanding his muscles and then moving straight on to the rest of his body. There wasn’t going to be enough room…!

A grey furred kangaroo hopped down the streets, blissfully unaware of the chaos his gift had caused. Alkali figured that Dael wouldn’t try out the package until he’d actually arrived to go out for food together. After all, it was super early in the day. He had no inkling that Dael might have already prepared a pizza, or that he could have devoured the entire thing. Without the scientist’s guidance over the nuances of utilizing growth potions… It was so, so easy to let it get out of hand without an experienced hand.

He hopped to the front door, ignoring the way the house shuddered and shook down to its foundation. An enormous brown muzzle burst through the door no sooner than Alkali had tried to knock on it once. The roo flew backward into the grassy front yard, rolling a few feet before coming to a stop. He shook his head and spat the grass out of his mouth before he paused. The sight of his friend completely filling the front door with a face alone was enough to get Al’s attention.

That enormous muzzle split into the biggest grin Al had ever seen on his friend. “Oh yeah, I’m feeling great. Just hoping you brought some more food. And more potion too if you have it. I’m starving now.” And sure enough, the entire house shook with the force of his belly gurgling. 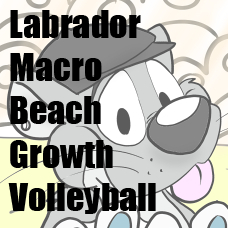 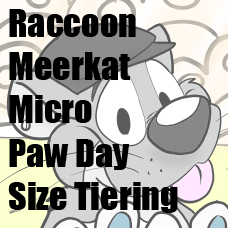 When you receive an unmarked package, filled with a glowing green liquid claiming to be 'Growth Potion', you should be careful with how you use it. Have a friend nearby to help explain the ins and outs of growth!

Dael learns that lesson just a little too late.

This story is for a newer friend, Trib. He wanted a short commission, but honestly this idea was sweet enough I just did it for free. Hope you enjoy Trib!

You can find Trib and his art here! https://twitter.com/tribdinosaur