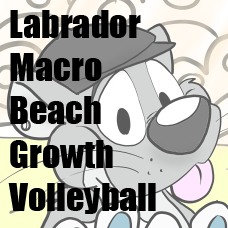 The entire beach seemed gloomy. What was supposed to be a sunny weekend had turned into a cloudy, dreary mess. Everyone that came out for a day of fun and sun was massively disappointed by the lack of the latter.

And that was the scene Labby arrived to. A 10-foot-tall Labrador, heavyset and wearing nothing but a pair of blue swim trunks with a towel draped under one arm, walked onto the beach. He’d been drawn to the beach for the same reasons as everyone else: a wonderful weather forecast of lots of sun. He’d been cheated of a nice day as well. But the goodest boy walked across the sand to the volleyball court with a slight skip in his step, happy in spite of the dreary weather. He could still make the best of this day and maybe bring a little sun to everyone else on the beach.

What better way to spread a little cheer than to make himself larger and show off a sunny disposition? The canine reached into his beach bag and pulled free a blaster, sci-fi in design and made almost entirely of chrome. Written across the side in spray-painted, stencil letters read ‘GROW RAY’ as if to simultaneously advertise its use and to warn against its use. He pointed the muzzle of the ray at his chest and pulled the trigger. Rather than feeling uncomfortable, the beam of red electricity felt ticklish more than anything. The Labrador giggled as he rose from simply ‘large’ all the way up to enormous as he towered over buildings on the boardwalk. Sand squished between his toes as the already heavy canine packed on tons of mass, sinking his paws deeper and deeper into the sand.

Once he’d reached 100 feet tall, Labby walked up to the beach volleyball court and smiled down at the people preparing a pick-up game. “Hey! Can I play?” Labby asked, flashing a bright smile. Everyone at ground level wasn’t sure what to expect anymore

“Y-Yes?” one of them replied, a stuttering rat looking up at the doggo with wide eyes. Labby was large and wide enough that he eclipsed the sky above, casting the court in shadow even in the reduced sunlight of a cloudy day. None of the players was really sure what to do anymore. They hadn’t really been that invested in a game but could they turn down a Labrador that big?

Labby smiled brightly, and a little bit of sun appeared from the skies above. “Thanks! Just looking to have some fun today,” he said with a wagging tail, creating enough wind to blow some of the wind surfers further out into the ocean. Those wind surfers waved back to the shore, each of them happy to finally have some better waves to carve through. It seemed that the giant doggo’s sunny disposition had an infectious effect on the beachgoers.

Being a giant now, it was easy for Labby to smash the ball toward the other side of the volleyball court. Unfortunately, it was also hard for him to reach down to catch any balls before it landed in the sand. He wasn’t doing so well. Oh well, can’t fix that problem. Instead he bid his teammates a farewell and thudded back across the beach. The other players bounced slightly with each of the steps, so badly that they needed to wait for Labby to be far enough before starting another set of their game.

The giant dog wasn’t paying super close attention to his steps though, ignoring the way his smallest toe smashed into a changing room and knocked the wood free. People changing inside the debris of the building tried to cover themselves in an instant, blushing and unsure. They laughed as they watched a giant canine bashfully wave over his shoulder and mutter a ‘sorry.’ The sun peeked out through the clouds, illuminating with beach with more rays of sunlight. It seemed the more happiness and laughter he spread, the more Labby contributed to bringing sunlight here.

Labby’s nose twitched, as delicious scents filled his nose. Hot dogs. His head whipped back and forth, trying to locate the source of the tasty treats. There! Far at the end of the boardwalk a food cart was parked, covered by a red and white umbrella. A hedgehog passed out hotdogs to the line of customers. His tongue lulled out of the side of his mouth before he began panting. No stopping the doggo now. He’d located his quarry and there would be no distracting Labby anymore.

The food cart owner felt Labby’s approach before he saw the giant dog. His bottles of ketchup, mustard, mayo, all started to bounce in place with ever increasing intensity. The squirted line of ketchup on a hot dog zigged and zagged with the quaking steps. Frowning, the hedgehog turned around to see whoever was responsible. Then he was forced to crane his neck back. Way, way back.

Labby plastered a bright grin across his face when he waved down. “Hey there. I’m pretty hungry, so would you mind if I just… grabbed your cart? I’ll pay later. Promise.” The enormous canine didn’t wait for a proper answer; the cart was already plucked up between his fingers as the cart owner nodded mutely. After all, what could he say to convince a titanic Labrador otherwise?

The giant dog took a seat at the edge of the pier, listening to the wood crack and splinter beneath his backside. He wasn’t greedy enough to eat every hot dog inside the cart all at once though. It would spread much more happiness if he shared the hot dogs with the rest of the people on the beach. People lined up all along the pier and the goodest boy passed out the hot dogs. The infectious, sunny disposition started to spread all along the sandy shore just in time for the cloudy day to clear up properly.

And just in time for the doggo to toss the entire remaining cart into his awaiting muzzle. It crunched in his mouth as he chewed, but Labby didn’t seem to mind. There were still plenty of delicious doggers inside to make it a treat for the hungry giant. He licked his lips and leaned back onto the buildings on the boardwalk, feet resting in the sand. Though the gift shop Labby rested on creaked and groaned, it did not break beneath his weight.

“Now that’s much better,” he muttered, as he plucked a pair of sunglasses out from his bag and pushed it onto his muzzle. 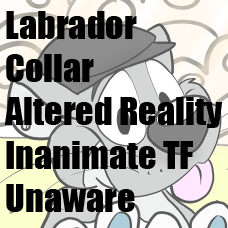 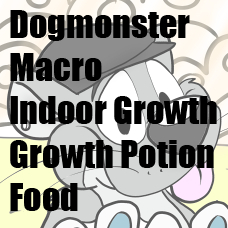 Cloudy day at the beach? Worry no more! Just invite your local giant Labrador to come over and spread a little sunny disposition. Don't worry, he'll just eat all your snacks.

KingDead just keeps coming back for more cute ideas, and I am so here for it. <3 Thanks again for the commission KD! And hope you enjoy Labby!

Also starring Mr Labrador, who can be found here! https://twitter.com/mr_labrador