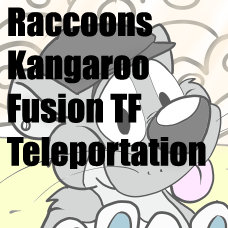 “Hey Al, are you sure this will be safe?” Ness asked, poking at the ceramic sides of the large, bright-white cylinder.

“Oh sure. Mad science has plenty of safety precautions. Lots of ‘em,” Alkali replied, tearing wires out of a large console with wild abandon. Ness wasn’t much for science but he had a feeling that wasn’t supposed to be happening. Nor the shower of sparks that accompanied the impromptu troubleshooting. But he already agreed to take part in the teleporter’s beta test so there was no backing out. The raccoon stepped inside the pod and waited.

When Alkali’s head reemerged from inside the console, he closed the lid with a slam. “Okay, we’re all ready to go. You just stay there for a second while I double check the pod in the other room. Don’t touch anything,” the kangaroo cautioned. He hopped away carrying a power drill leaving Ness alone with the beeps and background hum of the roo’s lab. He sighed, twiddling his thumbs. With all the time and preparation this took Ness couldn’t believe there was anything left to check.

Suddenly, a pane of glass closed on the front of the pod trapping Ness inside. That wasn’t supposed to happen. Ness pressed at the glass, but it didn’t budge. Another face peeked into the pod from the side, wearing a red cap and a raccoon’s mask.

Geo smiled back and pointed to his ear. The raccoon tried to say something but there was no sound that came through; Ness tried to read his lips and barely made out ‘can’t hear, gonna start.’ That didn’t sound right at all. Ness tried to calm himself down. Maybe Alkali already gave Geo the okay to start the experiment. Yeah. Nothing to stress out about. He tried to reassure himself of that fact as the pod filled up with smoke and a bright blue light flashed in his vision.

At the other end of the lab, in front of an identical white pod, Alkali paused his repair work. Something didn’t seem right. He could hear something warming up in the other room. Something that sounded strangely similar to his experimental teleportation equipment. But he knew that couldn’t be right; no one else was there to turn it on, and Ness was inside the pod. So the roo shrugged and went back to screwing a panel in place.

“There we go, all fixed!” he said. Alkali turned around to return to the other room and ran into the glass door of the pod with a smack. “Ow! …wait, why is this closed?”

Surges of electricity covered the inside of the pod. The kangaroo looked around nervously as the bottom half of the pod filled with smoke. Alkali only had an instant for his eyes to get wide as he realized what was happening before the blue bolt of energy struck him. Ness’s particles were forced into their confined space without regard for its current occupant, but outside the pod it merely looked like it had filled with smoke. A small screen on the side of the pod flashed a bright red ‘ERROR’ message, followed by scrolling computer code as the machine tried desperately to parse out a solution to the extra occupant problem.

It only took a few seconds. The doors whooshed open letting the smoke spill forward. A stumbling foot exited the pod, still long like a kangaroo’s, followed by an arm that wore a bright green shirt. The creature coughed violently as it tried to walk out of the pod. He adjusted his glasses squinting down at his hands and the strange colors on it. Ness and Alkali already had pretty similar color schemes, but it was different shades of grey now. So when neither of their minds recognized the shade right away both knew something had gone wrong.

“Oh no,” the newly fused kangaroo-raccoon hybrid said. And neither of them recognized their voice, or the shape of their muzzle. “Something has gone very, very wrong- You’re telling me! I told you to not touch anything! Err, us? Dammit Ness.”

One hand went up immediately toward their ears, unhappy that it wasn’t nearly as long anymore while the rest of him tried to find a mirror. It took a few moments of awkward fighting with himself, but the roocoon made his way to the bathroom to look up and down his new, fused body. Ness’s clothes were all there, along with the trademark raccoon mask, but it was on a strangely tall body with a sleeker, longer tail. Ness was satisfied with the retention of his stripes, while Alkali looked down to see if his paws were just as long. Thankfully their long toes peeked out just fine at the end of long kangaroo stompers. It seemed most of their traits had blended together into one body, taking all the best parts of both. Now that their curiosity was piqued the roocoon pulled off the green shirt to look over the markings there. It seemed they’d put on a bit of weight; a chubby belly wobbled lightly on their tum.

“Looks like all our mass got combined. That would explain the height change. And the… extra weight,” he pondered aloud, pressing a hand experimentally into his pudge. They stood in silence for a moment, waiting for one or the other to say something first. It was made even more awkward by the fact they both had the same thing on their mind. Carefully a hand snuck down toward their shared briefs and pulled the waistband forward. The roocoon’s face went bright red before letting the elastic snap shut on their hips again.

“I guess… this isn’t so bad. Is it? No not really. Could be much worse. Ahahah…” he awkwardly chuckled, two minds having a conversation with himself. Neither one had said it out loud, but they were both thinking it and that was just as good. No thoughts were off limits anymore now that they inhabited a single body. They were perfectly fine with the situation. More than fine really. Both hands started to knead into their shared tum, awkwardly, bashfully.

While the two minds struggled to make sense of their new body, Geo’s head peeked around the corner of the bathroom door. The raccoon’s tail swished back and forth happily, silently watching the scene. He would’ve gotten away scot free if he didn’t accidentally let out a happy chitter. Nessali… Alkess? They’d need to workshop a name together. Regardless, the fused roocoon turned when he realized they were being watched. Both hands stopped their massaging and exploring instantly.

“Geo. How long have you been standing there?” they asked.

“Long enough, chaps. Or I guess, chap now,” he giggled. “Just wanted to say it does look fairly good on the both of you.”

The roocoon stood there, looking the devious raccoon over. Both minds came to the same thought at once, slowly syncing up as time went on. “Oh, is that so? Well it seems I’ve lost my original volunteer for the experiments today. Maybe you could join in instead.”

Geo’s tail stopped wiggling. “What? Uhh. W-Wait, this was an accident. Well it wasn’t an accident, but we can still fix it. Right?”

The fused scientist smiled wide. “I dunno about that Geo. A mistake like this could take days to fix. Weeks. Months maybe. And all that lost experiment time… you’re definitely going to have to make it up to us. Uh… me. Yeah. Me sounds better.” The roocoon bounded forward, using the hopping power and speed of his shared genetic background to pounce on Geo in an instant.

“And the best part? Now I have all the kinks and quirks of both sides. Oh Geo, we’re going to have so many experiments for you to try…” 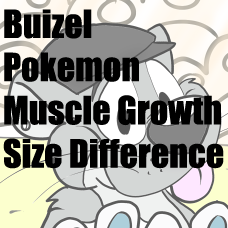 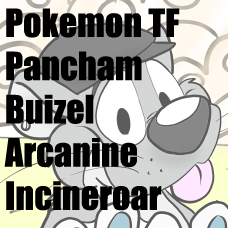 Teleporters! The transportation of the future!
...and also usable for all sorts of awful mad science situations. Ness and Alkali are about to get closer than ever, thanks to Geo's shenanigans.

Something thrown together for fun, less than an hour of work. Ended up being really fun!
Also kind of a gift for

GeoHolms. Because they're the sort of silly folks that would like it too. :B