Step Right up, Would You Like to Play a Game? by Alcho 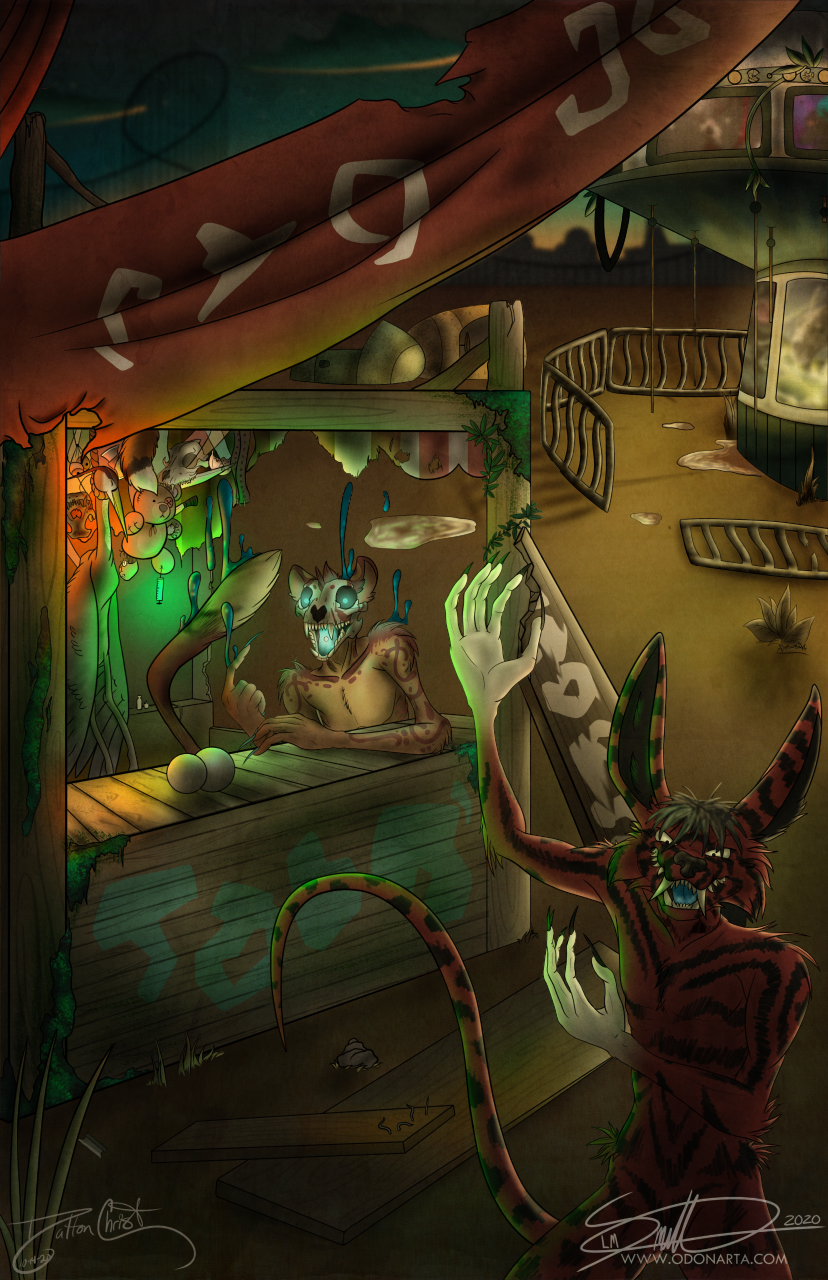 Step Right up, Would You Like to Play a Game?

“One ball…. One bottle, boy. Let’s see what you got”, Vice calls.
“Watch and learn kitty.” The boy eyes up the last bottle, picks up the final ball, and sends it flying! The ball skims the side of the bottle, sending it into a frenzy of spins and jumps all down the counter, bouncing off of the backboard, and rolling towards the edge. Everyone was silent as the bottle twisted and turned, rolling down the seemingly endless counter. As it reached the edge, the bottle began to slow, and eventually stopped, hanging halfway off the ledge as it found it’s resting place.
“Oh dear… Looks like I win sonny. Time to pay the piper.”
“Big deal dude, this place is a dump anyway, I don’t’ care if I’m banned, I’ll party elsewhere.”
“Oh, how right you are! Here…”, Vice hands the boy the glowing ball, eager for the boy to hold his end of the bargain.
As he takes the ball from Vice he looks into it and seems to freeze. “What… what is this? It has no weight? Why can’t I move? What the hell man, what the hell is this!? What’s going on!?” The teen started yelling as he became more and more frantic and fearful of this small, seemingly harmless object.

“I told you… you knew the deal.”
The friends all looking on horrified were powerless to do anything as they watched the boy slowly have his life essence seemingly drained from him, falling onto his knees, and eventually to the ground, lifeless. The crystal ball rolling out of his palm, glowing brighter than before. “Man!? What was that shit!? What did you do to him?!”, called one of the vandal’s friends.
“I kept my side of the bargain. He did his. I have his soul now. Now… now that you know what will happen if you trespass here, or anywhere near here, let it be known to you, and your friends. Spread the word between your people, and tell them to not speak of this to anyone outside of your circle, or you’ll find the same fate as this deadweight.” Vice nudges the lifeless body of the boy while he picks up the glowing ball for himself, seeming quite pleased with his deal. “Now go. Go and don’t come back, or you will end up the same.” The boys run back into the woods terrified, fighting ferociously through the same obstacles they had faced on the way in. Once they were far out of sight, Vice turns to crazy and grins once more. “See friend? I have everything under control. You will have your silence… now maybe you’ll trust me?” He looks to the ball in his hand, then to Crazy, still standing there silently, as the glowing baseball shrinks down to a small marble sized orb in which Vice sticks into his mouth and clamps shut. He moves his tongue around in his closed maw for a while then sticks his tongue out at Crazy, showing the glowing orb being back on it’s piercing like what was shown that night they met. “Everything’s going just fine. Now… let’s head back home, shall we…?” Vice starts back toward the hospital with a bit of pep to his step and hums a sinister toon to himself.
Crazy watches the curious cheetah disappear into the weeds and thinks for a minute, then looks to his own giant hands and whispers to himself, “So this is how it’s going to be then…? So be it.” He looks back at the park, who’s power is flickering on and off sporadically and notices the posters in the old carousel have illuminated to show pictures of familiar faces. Quickly he looks away and begins fighting his own way through the thick brush, back to his darkened lair to escape the breaking dawn.