A Dark Twist of Fate? by Alcho 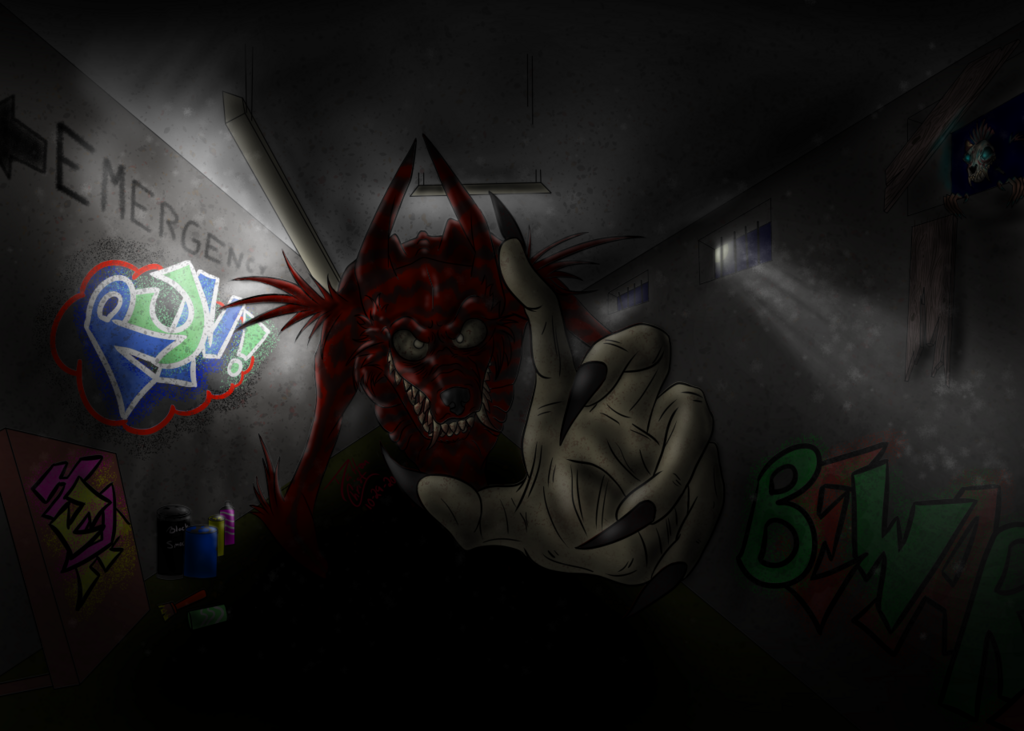 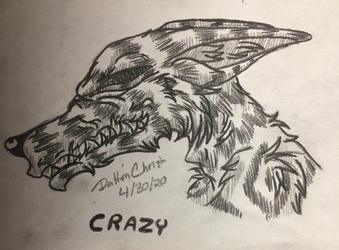 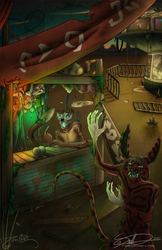 A Dark Twist of Fate?

“Months have passed since the disappearance of our beloved trophy hunter, and still no sign of him. Local police have no new leads, nor any tips coming in. They are asking again, if anyone knows anything, or has any information that may lead to the whereabouts of-” The static-filled television program was cut off as a remote was tossed a corner of the damp, dark room.

“Silly reporter lady. Hunter will never come back. He lost. I won. He is now quiet. His place is here now.” The creature looked over and swatted at a fly buzzing around the now clean skull sitting above a makeshift shrine-like collection of assorted skulls. “He is now mine. Too bad.” Admiring the grotesque, but somewhat organized pile of skulls, he brushed the backs of his giant fingers over them, “I have the best friends. They stay quiet, they do not eat my food, they do not annoy me.” Just then he heard a hollow rattling somewhere in the hallways above. “So much for peace and quiet. I will have a new friend this day.” As he began slinking up the stairs, assuring his existence remained unknown, the rattling stopped and a new sound, one hissing began. “What horrible noises!”, he mumbled to himself as he creeped through the labyrinth of corridors and lobbies towards the still hissing intruder.

As he crept closer, he began to hear a faint voice in the distance. “Sing with me, sing with me, we gotta fight for our right to party!” As the voice grew louder, he slowed his advance. Slowly he peered around a corner which lead to the old Emergency Rooms section of the abandoned hospital, revealing nothing at first glance. Using the darkness as a veil, he continued his pursuit of the now multiple noises.
“You’re here somewhere. I’ll fiiiiind you… Disturbing my friends and I will be your last mistake.”, he whispered to himself. As he turned into the main hallway, he noticed there were two of the overhead hanging lights illuminating the end of the path. “There you are. What are you doiiiing?”, once again whispering to himself. The singing continued and as the hissing stopped, the rattling once again resumed, bringing their stalker to a heightened level of aggravation. Stopping to assess the situation, the creature squinted his eyes, which were not accustomed to any amount of light, and realized there was no way he was going to walk up to his would-be victim unnoticed. Surely the light would give him away, with his massive size and unnatural coloring. He looked to the lights, the first was intact, with both wires holding it to the ceiling, but the one closer to the noise had fallen, and was now hanging from one of the two wires that anchored it to the ceiling. Due to this, the light shown towards one wall, and left a large area dark behind it, with only ambient light illuminating sections of the opposing wall. Other than that, the area was dark, save a few rays of moonlight that shone in through the small, barred windows at the top of the wall. “I see. I’m going to have to work a little for this one… so be it.” As he assessed the situation further, he darted across the hallway, and began his advance along the far wall. Once he reached the edge of the first light’s vision, he slowly began scaling the wall. Sideways, he managed to avoid the light from the first dimmed bulb, and began his descent back to the floor. Reaching one foot towards the ground, he managed to fit into the shadows between the fixtures, continuing to be undetected by the singing annoyance.

“And done! So much for the urban legends. This place is just a dump. Hell, at least I’m able to leave my mark, so everyone knows that I wasn’t scared to do what they wouldn’t!” The voice stops and begins rattling violently once more, driving the approaching assailant’s hair to raise on its back.

Lowering his head to avoid detection, the creature realizes that the horrible rattling and spraying noise was spray cans! He maneuvers himself behind the second light, briefly being revealed by the rays of moonlight, but remaining undetected by the vandal. Now directly behind his prey, he squints and sees that the graffiti reads “Run”, “Hide”, and “Beware!”. “Fitting phrases. Good advice you should heed”, he growls.
Surprised, the graffiti artist spins around horrified, “Where did you come from?! Where are you?! Who are you!? What do you want?!”
“I want quiet. You have made much noise. You defiled my home. Now… this will become your home.”
“No! Wait!”
The creature reaches out his hand, seemingly pleased with his hunting of this new prey. Cornered, the vandal had nowhere to run, nowhere to hide, and looked away to face his fate. “Time to sleep. Quiet now…”
“Excuse me, dear sir”, calmly comes an unknown voice from nowhere.
Confused, the creature’s eyes shift, scanning the darkness, seeing nothing. “What trickery is this? Who are you?”
“No trickery, silly. Look up. Beside you.”
Turning to his left, he looks up, arm still extended to the vandal, and sees two blue orbs glowing in the busted window. “You’re brave. What do you want?”
“I’m just saying hi.. I’m a big fan of yours. I do have a request of you, if you’d be so inclined to hear me out?”, whispered the unknown entity.
“I’m busy.”
“It’ll only take a second!”
“What do you want?”
“That pathetic life you have cornered in front of you. It is mine. I would simply ask that you do no harm to it.”
“It’s noisy. It painted my home. It must die.”
“Oh it will. Just not now. I will make sure it does not bother you again, and it leaves quietly. What do you say? It will never bother you again, I promisssssse.”
Growling, he looks back to the horrified vandal, and back up to the form still shrouded in the dark. “Fine. If it spreads word of my home here, I will find both of you, and you will wish you had never been born.” He lowers his hand, looking to the glowing orbs in the window.
“You heard him, SCRAM!”, as the figure whisps his voice a small orb of light is seen within its mouth briefly. The vandal takes off running, tripping and falling constantly in the darkness. As the sound of the escape fades to nothing, the two look to one another, and the creature sees the figure in the window shift. The orbs seem to bend a bit, as if it was smiling. It then jumped to the floor, and walked into the beams of moonlight, allowing itself to be partially revealed. Its body is narrow, a very thin frame of a cheetah seemingly demented, for any living creature this thin would be long deceased. There were hints of red splotches over its faded orange body, and a very curious marking lay over it’s heart. Much like the observer, this “cheetah”’s fingers were elongated, giving them a very threatening appearance. The most curious aspect of him though was its face, as it was free of flesh. The skull atop its neck acted as if nothing was amiss, functioning as it would if all of the connecting tissues were still there. Its small mohawk that continued down its back shone with the light from the orbs that acted as eyes in this bizarre life form. “Much obliged”, it spoke as it walked closer into view. “It would have been a shame to lose that one. I have so many plans for him, and he’s a rather fun fellow.”
“Why are you here? Why was he here?”
“I’m just following my best interests at the moment. Right now, those interests are with that so called “vandal”.” The cheetah looked up at the monstrous figure towering over him, “So, now that that’s taken care of, what do I call you?”
“You don’t call me anything. You leave.”[/center]
“Hey… I thought we were on good terms? Wouldn’t it be a simple pleasantry to introduce yourself? Come on…? What do I call you?”
Clearly annoyed, he growls, “I have no name. Not that you will know.”
“That’s silly talk. Come on… you can’t have NO name! How about a nickname? What do people call you…?
Thinking for a moment, annoyed, he looks back to the cheetah and replies with a bloody smile, “Crazy…”
Raising what would be an eyebrow if it had flesh, the cheetah looks to Crazy and gives a dark smile. “Vice.” He reaches out his hand and says again, “You can call me Vice.”
Looking at the hand, Crazy’s eyes look to Vice’s and the smile slowly fades. “I do not shake hands. You are in my domain, and will leave now. I am not here to share. Take your noisy one and go.”
“Oh come on… I’m a friend…”

“I have my friends. They do not talk.”
“I’ll be quiet then.”
“Doubt that.”
Getting frustrated at the insult, but attempting to hide his discontent, Vice replies, “Understandable. How about this then, friend? You don’t share anything with me, but I’ll help you keep things….quiet… around here if you will be my friend? I’ll stay outside the building, and you won’t even know I’m here!”
Suspicious, Crazy asks, “And why would you want to do that?”
Smiling from ear to ear with a sinister look in his eyes, Vice simply replies, “That’s what friends are for. You let my friend live, which I’m grateful for, so I’ll help you live in silence. Seems like it’s a fair thing to do to me…”
Glaring at the smiling Vice, he growled, “Fine. You can stay. If you’re quiet. If not, you will be my next quiet friend…”
“Won’t hear a peep from me!”
“We shall see.” With that, Crazy began his descent back into the shadows, pushing the broken light out of his way as he slid into the darkness of the night.
“Oh, this will be a grand deal, “friend”. Vice laughs to himself as he springs up to the broken window and begins crawling out into the night. “Oh a great deal indeed…”