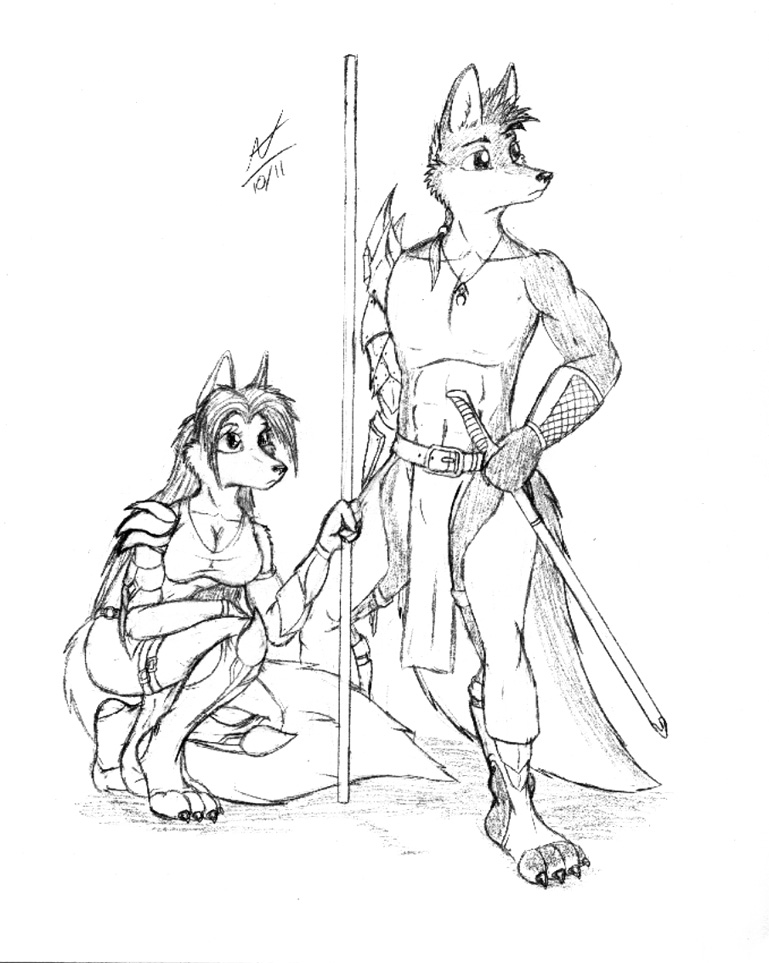 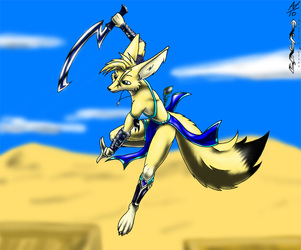 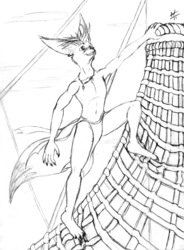 I spent a Christmas in the mountains one year, where my family and I were able to take a few hikes through snow-covered terrain. While making our way through the winter wonderland, my creative juices got going as I began wondering what my own alpine snow-traveler, Tenefer Eos, might have gone through while trekking with his own family. He grew up among a close-knit pack of wolves in distant mountains, so I'm sure they traversed similar landscapes before the budding young Sage left on his journey south. Before long, I came up with these characters. I drew one on New Years Eve, and completed with the second after the New Year had begun.

Therasa and Synaric Eos; Tenefer's mother and father. Like my other characters, their own backstories almost immediately developed in front of my mind's eye...

Therasa was the eldest daughter of the tribe's chief and head of clan, but she was also forth-youngest out of five pups (three older brothers and one younger sister). Since her father was a prominent Auran Sage, it was only natural that his children end up developing their own supernatural Auras upon coming of age. However, Therasa was the only one who didn't awaken. While her siblings were granted talents and abilities beyond comprehension, some commanding the elements while others given insights of the mind, Therasa could only rely on her wits.

As the years went on, the pups grew into teenagers while their father grew old and blind. However, his wisdom never faltered or diminished. Eventually, it came time to pass on the family heirloom, the ancient Verrocite staff, Jynn-Karu. It was a weapon believed to have been given to the Eos clan centuries in the past by one of the Shepheri themselves, the first children of the Aurorae and carriers of the original Auras. To come into possession of such an artifact meant being entrusted with a piece of supernatural history. Though each of his children displayed admirable talent and were all more than worthy of being trusted with Jynn-Karu, only one could carry it on through the family to future descendants. He chose Therasa as his successor. In spite of her lack of mystical talent, her father chose her. It was a move that surprised everyone, especially the young she-wolf. Though some tried reasoning with him that she did not display an awakened Aura and couldn't use the staff to its full potential (Verrocite only reacts to and bonds with an active Aura), her father insisted that she was the right person for it. He added that everyone will understand in due time.

Synaric came across the tribe quite unexpectedly.

While the Eos clan was out hunting, a horrible blizzard came upon them. Being used to this sort of situation, they easily set up a camp to wait out the night, as they were too far to turn back and return home in this kind of weather. Not long after they had set up, the blizzard died down a little and the scent of blood wafted through the winds, catching everyone's attention. They immediately journeyed out moments before the storm whipped back up, thrashing them with chilling wind and biting snow. The wolves were built for this, however, and pressed on as they realized the blood belonged to another wolf, but this one not of their own tribe.

They found Synaric half-buried in a snowbank and severely hemorrhaging. Luckily, their as-of-yet-unused hunting tools could easily double as trauma impliments. While the cold numbed Synaric's wounds, they cleaned and sewed them up then brought him back to their camp to begin nursing him back to health.

The next day, they immediately headed back to the rest of the tribe, a recovering Synaric in tow. The tribe's medicine man assured everyone he would recover just fine, thanking the Eos clan for their quick response and hospitality.

No one was sure where the black-and-white wolf came from; he carried a unique scent they didn't recognize, his armor was unlike any they had ever seen, and his sword looked very odd comparied to their own weapons. Synaric himself would only divulge his name, appearing fearful of speaking about where he came from. The tribal elders came together and decided that if it was asylum he sought, even braving a horrible blizzard to obtain it, then he would be allowed to find it within their own tribe. The head of clan Eos approved of this motion, believing that Synaric's own appearance of relief confirmed that he and the rest of the tribe would be safe from whatever he ran from. He volunteered to take the young wolf into his own clan as an adopted son.

The years continued to go on with no problems; Synaric assimilated not only into the tribe, but his new clan, as well. More than that, he found an admirer in the form of Therasa. Before long, the two wolves began courting and grew ever closer. Shortly after Therasa was granted the privilege of safeguarding Jynn-Karu, they were married in love.

The new couple enjoyed a pleasant marriage for many seasons, and eventually, Synaric gained his own special rite: heir of the clan. Once again, Therasa's father defied all expectations and declared his adopted son to replace him as head of the clan and tribe elder upon his own passing. Synaric's foster siblings all wondered if their father's mind was degrading in his old age, but he simply replied the same way as he did with his daughter's gift; everyone will understand in due time.

Years passed, and the father's health continued to fail. Meanwhile, it was discovered that Therasa was pregnant. Months went by; the family monitored the status of both individuals, but during Therasa's later term, another blizzard came upon the tribe's homeland. This storm was a rare occasion where snow piled on, threatening to trap everyone in their homes and endanger them upon melting in the warmer weather of the next season. They had to relocate.

Therasa tragically became separated from everyone in the wrath of the tempest, and was forced to carry her burdened self through thick snow in hopes of catching up to her family. Finally, the winds died down momentarily, but relief would not come; a pack of vicious voraks, deadly predators of the land, came upon her. Even carrying a child, the she-wolf fought bravely, desperately struggling to protect herself and her unborn pup. She managed to take out all but one of the beasts, the alpha. Therasa was already bleeding and dreadfully exhausted, but steadied herself for what she knew was going to be a horrible battle.

The alpha lunged; Therasa readied herself, but warm blood splattered everywhere and the beast's headless corpse fell to the ground, staining the snow. Synaric quickly rushed up to cradle his wife, swollen with their child. He'd repaid the favor of his own rescue in the snow, and days later, Therasa gave birth to a healthy baby boy.

The clan elder, Therasa's father, insisted upon seeing the child, even though by now he was completely blind. As he held the pup in his frail arms on his lap, the elder wolf smiled and asked if anyone has yet figured out why he chose Therasa and Synaric over everyone else.

Therasa thought back to her struggle against the voraks, then mused that Jynn-Karu had been an exceptional weapon in defending herself. Upon her father's request to elaborate, she realized that her survival, without using an Aura, proved her worthiness. For years, she had to compensate for her lack of mystical powers like her siblings. She had to prove herself against supernaturals, using wits and talent that could only be learned through experience and determination. Through it, she possessed the one thing they didn't: humility. She knew what it was like to be without, and learned to accept and even appreciate that. Thanks to that, she could watch over Jynn-Karu without becoming conceited and risk misusing it. In that same manner, Synaric surmised that his option to lead the clan was because he, too, understood what it was like to be different. He knew what it would be like to be on the outside looking in, and through